At the beginning of Jul-2007, Boeing was on a high. It had just rolled out its first B787 from its Everett factory and was reveling in record ordering (532 for the six months to Jun-2007) as airlines enjoyed their best year for more than a decade. Later in the month its share price hit a record high of USD107.80.

Roll forward almost 24 months and the situation is vastly different.

The company’s share price has lost more than 50% of its value (the stock had lost as much as 70% of its value, but a recovery since March has retraced some of the losses), as the airline industry wades through its biggest ever crisis as demand and yields slump. Boeing has just ten net orders for the year to date and the B787 order book is going backwards as airlines cancel orders as they reconsider the future demand environment. So far, 58 B787 orders have been cancelled over the first six months of this year. 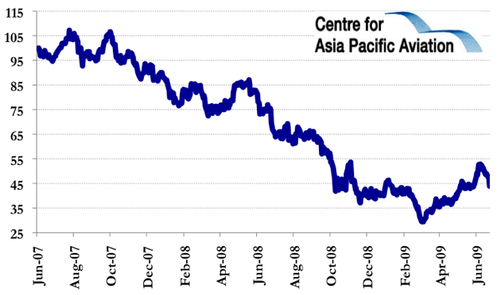 Making matters worse, Boeing has just announced a fifth delay to the test flight for its B787, pushing it back from the end of June deadline, due to structural issues. A new schedule for the test flight, and first delivery to All Nippon Airways, will not be available for “several weeks”.

The B787 programme, much like Airbus’ A380 programme, has now been subject to almost two years of delays. The aircraft, which was originally due to enter commercial service in May-2008, has yet to leave the ground and Boeing’s customers and shareholders are clearly unhappy. Boeing faces the spectre of further compensation claims, should the first flight delay translate into further delivery delays.

Boeing’s stock was the worst performing on Dow Jones Industrial Average yesterday, dropping 6.5%. All Nippon Airways, the launch customer, expressed its “disappointment” and has urged Boeing to “specify the schedule for the programme as a whole as quickly as possible.”

Qatar Airways' CEO, Akbar Al Baker, has a bit less tactful over the progress of the B787, launching a broadside at last week’s Paris Air Show, accusing Boeing of being indifferent to customers' needs and cautioning that Boeing could be left with “a load of parked planes”. The CEO indicated Qatar Airways could walk away from its B787 and B777 orders and return to an all-Airbus fleet. 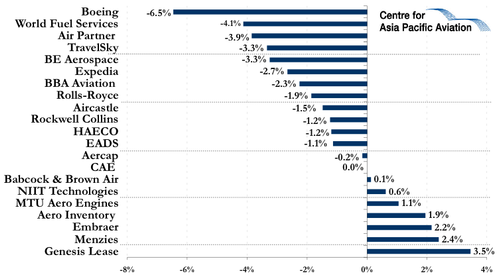