Boeing has announced the official resumption of B787 testing and set the delivery date for the first aircraft to launch customer All Nippon Airways for 3Q2010. The revised delivery schedule allows the company more time to install and certify fixes following a fire on a test aircraft in Nov-2010. Boeing will announce more details of the delivery schedule for the aircraft on 26-Jan-2011. Shares in Boeing gained 3.4% on Tuesday.

Airbus announced it has increased the average list price of its aircraft by 4.4%, apart from the A380, which has been increased by 8.4%. The A380’s additional price adjustment reflects "the type’s outstanding revenue-generating performance now being demonstrated in airline service". Airbus cited the costs of its aircraft production ramp-up rates coupled with the weak US dollar as necessitating the move. EADS, parent of Airbus, gained 3.1%

Embraer shares gained 0.8% yesterday, hitting a two-year high, as the company announced 2010 deliveries of 246 aircraft during 2010, including better-than-expected deliveries in 4Q2010. A total of 92 aircraft were delivered in 4Q2010, of which 30 were for the commercial airline market.

Meanwhile, Embraer’s major regional jet competitor, Bombardier, announced the CSeries development programme is on track. The aircraft is due to enter service in 2013. Bombardier CEO Pierre Beaudoin stated the manufacturer expects to announce new orders for the CSeries “shortly”. Bombardier has 90 firm orders and 90 options for the aircraft, from three customers. Bombardier shares lost 0.2% on Tuesday. 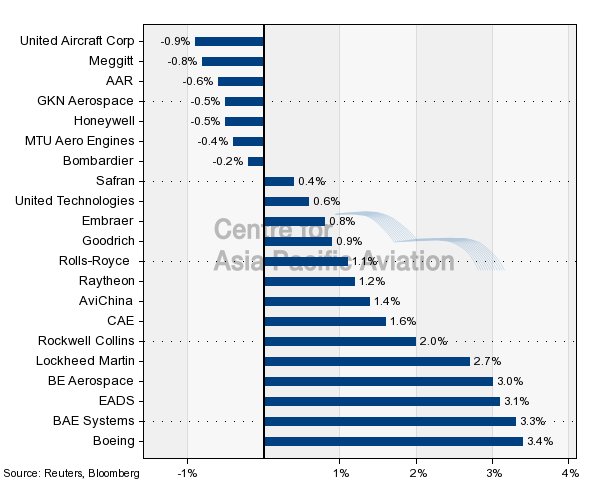