B787 one step closer to service

Boeing announced it started function and reliability (F&R) testing and extended operations (ETOPS) demonstrations on the B787 on 26-Jun-2011, another major step in getting the aircraft into service. This is the final phase of flight testing prior to certification of the aircraft.

In addition to F&R and ETOPS testing for the B787 with Rolls-Royce engines, Boeing continues certification testing on B787s with General Electric engines and will conduct a separate F&R/ETOPS programme for that version.

Boeing is also progressing with the testing of the B747-8 and expects to have a final configuration for the flight computer next week. The company's B787 and B747-8 are in an undeclared race to see which aircraft will enter commercial service first.

Rolls-Royce and Boeing have also launched a new shared data service. It will allow both companies to offer faster, better-informed advice to airlines to maximise aircraft availability. The service, available to airlines with Rolls-Royce Engine Health Monitoring (EHM) and Boeing Airplane Health Management (AHM) data, will initially be available for the Trent 1000/B787 Dreamliner and the Trent 800/B777 combinations. By year end it will also cover RB211-524/B747 and RB211-535/B757 combinations.

Boeing's board has declared a regular quarterly dividend of USD0.42 per share. The dividend is payable 02-Sep-2011, to shareholders of record as of 12-Aug-2011.

Shares in Boeing were up 0.5% on Monday. EADS shares lost 1.9% while Embraer shares dropped 6.8%. Embraer CEO Frederico Fleury Curado played down speculation over the weekend that the company was looking at a partnership with Boeing. Paulo Cesar de Souza e Silva, Embraer Commercial Aviation President forecast that the Brazilian real would continue to appreciate against the US dollar for another 18-24 months, until the economic recovery takes hold more firmly in the US. The appreciation of the real has been placing pressure on Embraer's margins. 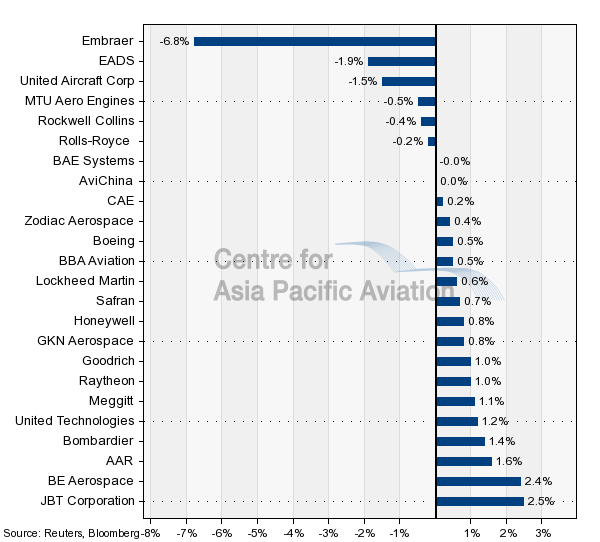