On 29-May-2019, English premier league football teams Arsenal and Chelsea will contest the Europa League final in Baku. Fans of the two London teams have bemoaned the challenges of travelling to Azerbaijan's capital city for the Wednesday evening game. The only scheduled airline operating between London and Baku is Azerbaijan Airlines, with just three weekly flights in May-2019, rising to five in the Aug-2019 summer peak period.

Apart from London Heathrow, Azerbaijan has only five other direct routes to/from Western Europe (Paris CDG, Berlin Tegel, Frankfurt, Milan Malpensa and Geneva). Lufthansa is the only Western European airline serving the country (from Frankfurt). Azerbaijan has enjoyed strong growth in seat capacity and route numbers since 2015, but this has been driven by connections to Eastern/Central Europe and the Middle East. Connectivity beyond its near neighbours is low.

It has only three direct long haul routes (New York, Beijing and Urumqi - the last of which barely counts as long haul) and must rely for connectivity beyond short/medium haul on the hubs of others. Turkish Airlines, Lufthansa, Aeroflot, Qatar Airways, Etihad and China Southern are the only airlines with significant global networks that serve Azerbaijan.

The Europa league final is part of a concerted effort by Azerbaijan to put itself on the tourism map.

Azerbaijan's schedule is almost entirely international, at least in the summer peak (99.1% of seats in the week of 5-Aug-2019).

The biggest region for its international seat capacity is Europe, which accounts for 62.7%, with Eastern/Central Europe taking 58.3%.

There are only three long haul routes (two really)

The only long haul regions are North East Asia (1.3% of international seats) and North America (0.6%), with Baku-Beijing, Baku-New York and Baku-Urumqi the only three routes involving these regions.

Azerbaijan Airlines operates Baku-Beijing and Baku-New York JFK. It has flown to New York since Sep-2014, but annual load factor on the route has always been below 60% (it briefly exceeds 90% in the summer peak, but is falls below 40% in the weaker winter months), which may call its sustainability into question.

China Southern operates Baku-Urumqi, but this is a narrowbody operation (737-800) and, at around 3,100km, the flight is not really long haul (it is shorter than Baku-London).

A Baku-Delhi service is planned by Azerbaijan Airlines. 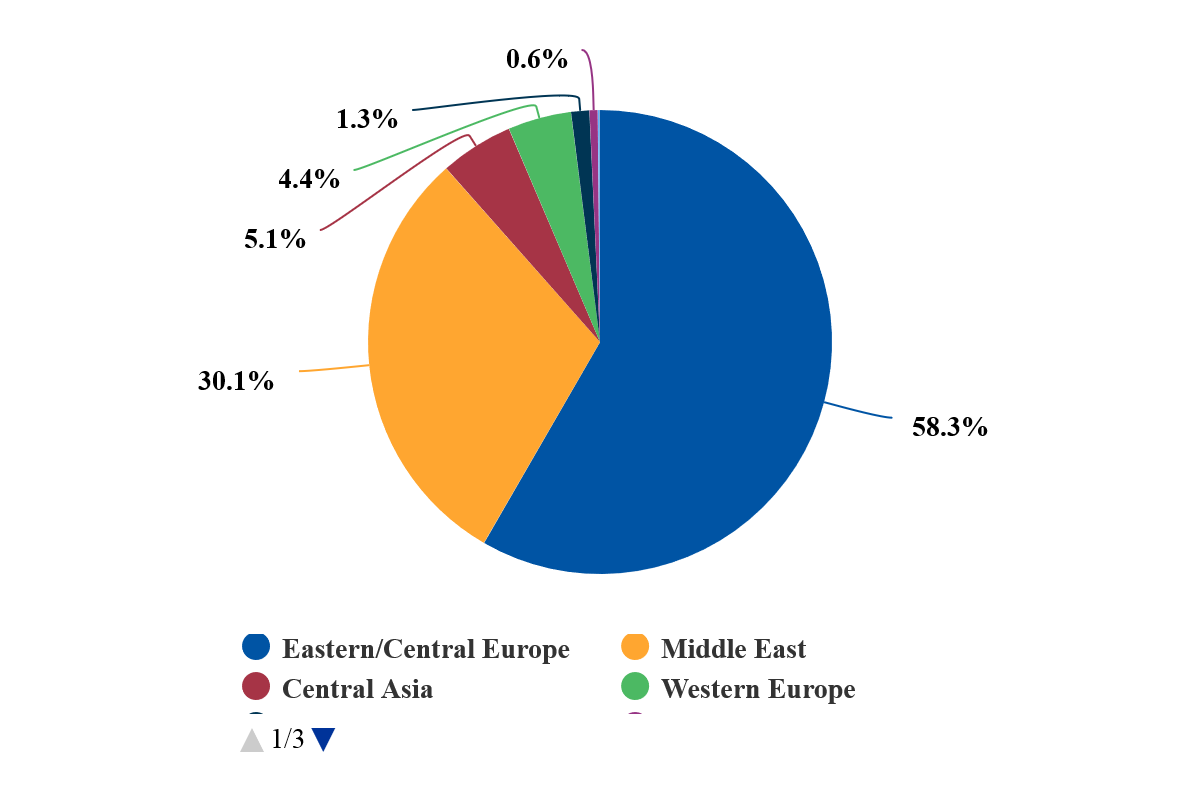 Turkey is the biggest country market by seats to/from Azerbaijan, the leader of a trio of major markets that also includes Russia and the United Arab Emirates. Together, these three countries account for almost two thirds (64.2%) of international seats from Azerbaijan.

In addition to Russia, CIS countries that also feature in the top 10 markets from Azerbaijan are Ukraine, Kazakhstan and Georgia. Adding in capacity to Turkmenistan, Belarus and Uzbekistan, the CIS accounts for one third of international capacity from Azerbaijan. 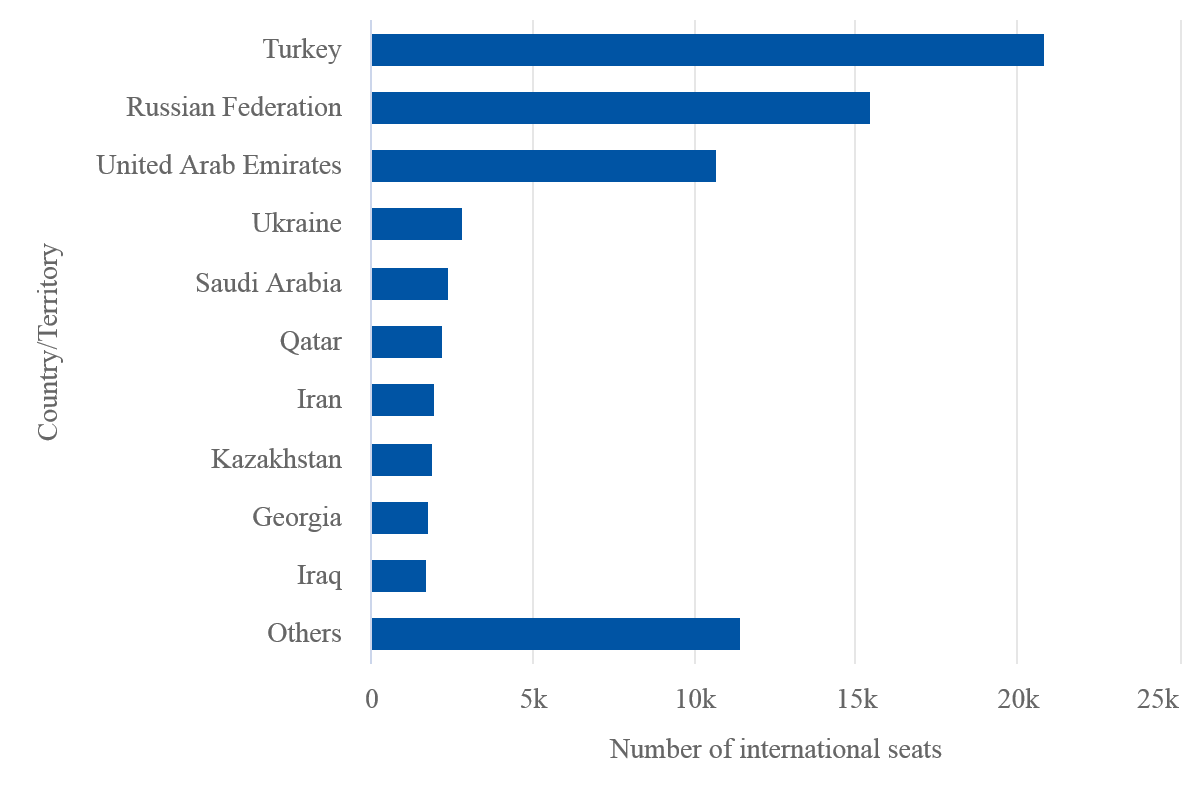 Based on OAG data for the seasonal peak week of 5-Aug-2019, there are 82 routes to/from/within Azerbaijan this summer, of which two are domestic and 80 are international.

The biggest increase in route numbers between summer 2015 and summer 2019 has come from routes to/from the Middle East, which have increased by 14 to reach 19 this summer (although this is one fewer than in 2018).

The number of routes to Eastern/Central Europe has grown by nine since 2015 to reach 46 this summer. One route has been added to each of North East Asia, where the total is two this summer, and North Africa, where there is just one.

Route numbers to Western Europe have fallen by two to six and to Central Asia by one to five over the same time frame.

On Azerbaijan-Eastern/Central Europe, the growth since 2015 has mainly come in the past two years. This has mainly been driven by Azerbaijan Airlines and Turkish Airlines. There has also been growth by Ukraine International Airlines, whereas Ural Airlines and UTair Aviation have reduced capacity to Azerbaijan.

On Azerbaijan-Middle East, the growth since 2015 came between 2015 and 2018. This was mainly driven by Azerbaijan Airlines and flydubai, with Qatar Airways also growing during that period and Air Arabia entering in 2017. The opening of services from Iran and Iraq also contributed to growth in this region. 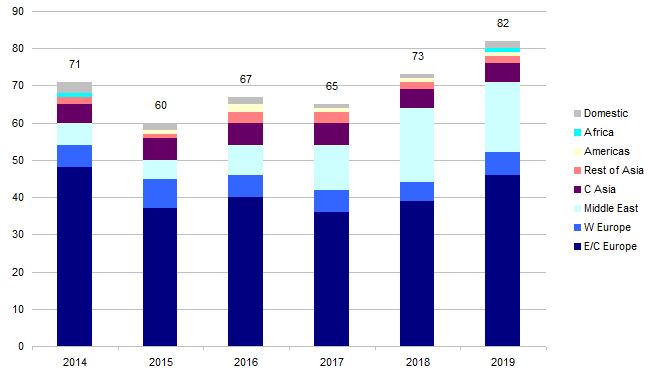 *Week of 5-Aug-2019 and equivalent week of prior years.
Source: CAPA - Centre for Aviation, OAG.

The middle years of the current decade, 2014 and 2015, were characterised by falling capacity, but there has been a strong recovery since then.

However, growth appears to be pausing in 2019. OAG data for 2019 up to the end of the summer season indicate flat seat numbers compared with the same period of 2018. 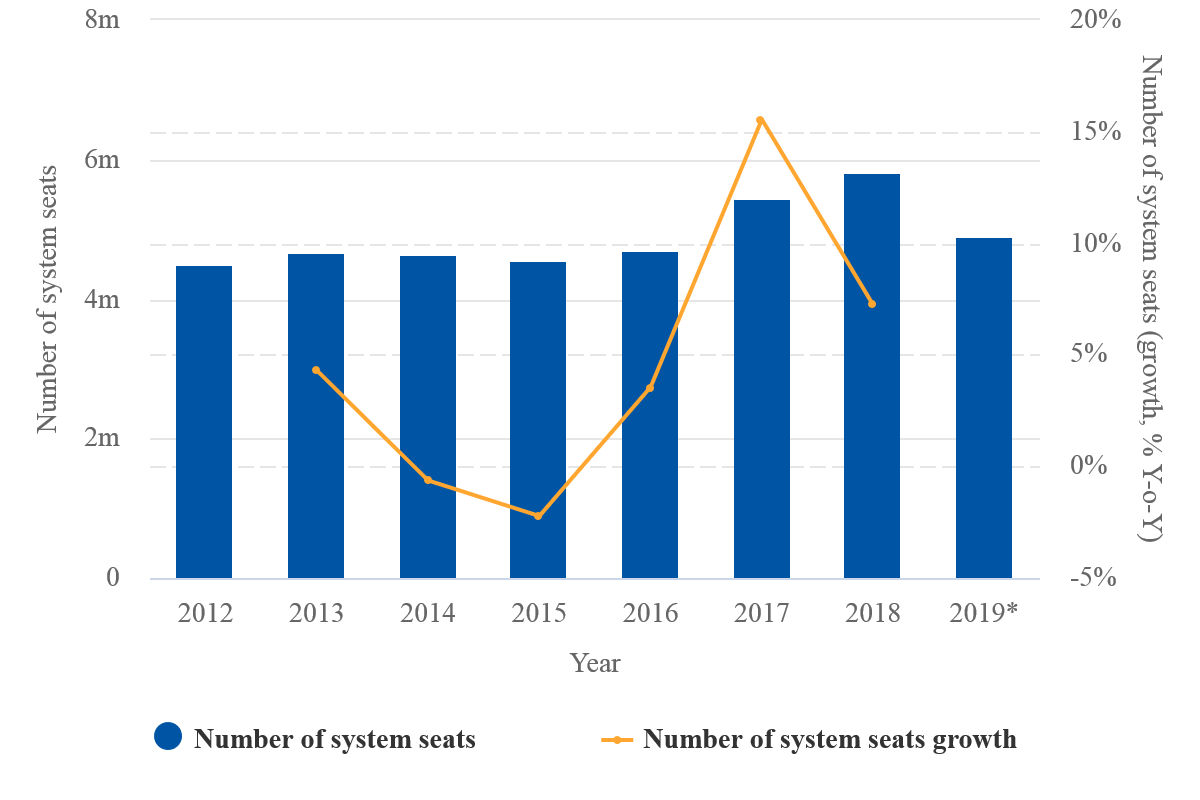 Source: CAPA - Centre for Aviation, OAG.
*The values for this year are at least partly predictive and not complete.

Baku Airport accounts for 96% of seats

Airline schedules in Azerbaijan are dominated by Baku Heydar Aliyeb Airport, which serves the nation's capital city. The airport accounted for 95.5% of seats in 2018 and a similar share in the week of 5-Aug-2019.

Ganja Airport has 3.1% of seats, while Nakhchivan, Lankaran and Gabala each have well under 1%.

Azerbaijan Airlines is the country's biggest airline, with a total seat share of 46.7% in the week of 5-Aug-2019.

Note that this includes the operations of its low cost subsidiary Buta Airways, which operates Embraer regional jets under the same J2 code as its parent. Launched in Sep-2017, Buta Airways' network operates to 17 destinations from Baku in 2019 (compared with 37 routes in total under the J2 code).

Azerbaijan Airlines/Buta Airways is comfortably ahead of Turkish Airlines, which has 12.1% of seats, and flydubai, which has 6.7%. Air Arabia, Lufthansa (the biggest and only Western European airline serving Azerbaijan), Qatar Airways and Aeroflot all have 3%-4% of seats.

In addition to Azerbaijan Airlines/Buta Airways, the country is also home to the cargo operator Silk Way Airlines, but it has no passenger capacity. 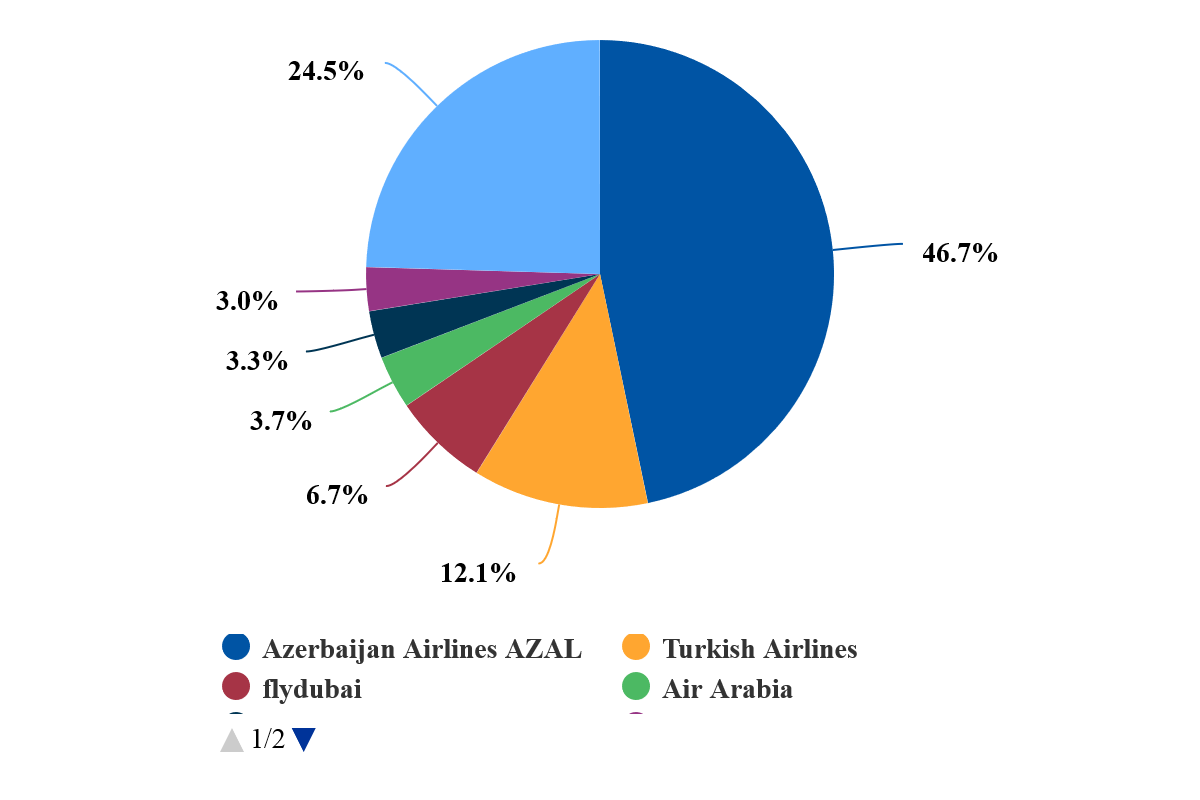 LCCs have a low share of seats in Azerbaijan

Even if Buta Airways' capacity were separately recorded by OAG, this would still leave Azerbaijan with a low LCC share by comparison with the rest of Europe.

There are no LCCs serving Azerbaijan from Western Europe (the only other European CIS country with no Western European LCC service is Armenia, but Ryanair is considering services to Armenia).

Azerbaijan is looking to boost its connectivity; open skies with the EU?

Azerbaijan is a fairly small country of just under 10 million people, but it is taking steps to boost its air connectivity and traffic levels.

Azerbaijan's Tourism Board aims to double the number of tourist arrivals by 2023, from 2018's 2.9 million (itself a 45% increase on the 2015 figure). Baku has hosted Formula One motor races since 2016, helping to boost its profile with tourists. The football match between Arsenal and Chelsea will be another chance to capture international attention.

The government is keen to negotiate an open skies agreement with the European Union and join the European Common Aviation Area, a move which could lead to significantly increased interest from Western European airlines, including LCCs. It is also working to upgrade and enhance its air traffic management capabilities.

As a country with a predominantly Muslim population, Azerbaijan has cultural links with Turkey and the Middle East. As a former Soviet state, it also has links with Russia and the CIS. These links are reflected in the existing airline network to/from the country.

It is geographically part of the European continent, but its location on the Caspian Sea is as close to Asia as it is possible to be without being in that continent. Its location gives it the potential to build much more significant connectivity with Europe and Asia.

Arsenal's footballers display the name of the club's shirt sponsor, Emirates. The Dubai-based airline does not serve Baku, but Azerbaijan's aviation leaders will not need this reminder that the Gulf airlines have successfully developed worldwide connectivity from their hubs – little more than 1,000 miles from Baku and with even smaller local populations.