Aviation is only one part of the renewed engagement between Iran and the global community but represents a significant opportunity for the companies involved. As is to be expected with aviation, the indirect benefits are multiplied as aviation growth supports economic growth by facilitating business, trade and tourism.

CAPA has issued a free 23-page report covering the key data relating to Iran's prospects. Much discussion of Iran’s aviation development has focused on replacing older aircraft. This is sorely needed. However, with the aggressive fleet induction time frames given by Iran, clearly Iran’s airlines will grow, making up for lost opportunities and seizing new ones from the economic growth that will result from the lifting of sanctions. This will have implications for the foreign airlines serving Iran that have carved lucrative niches, with handsome yields.

The next market for manufacturers: Iran wants 300 aircraft within 5 years, 500 within 10

Iran has ensured interest in its aviation market with a number of statements about aircraft needs. Deputy Head of the Civil Aviation Organization of Iran Mohammad Khodakarami said Iran would need 80 new aircraft a year, or 300 within five years.

The second figure is lower than taking 80 aircraft a year, or 400 over five years, indicating the lead time to acquire new aircraft, although aircraft manufacturers and lessors will try to free up immediate delivery spots. In the subsequent five years, Iran would need another 200 aircraft and would thus take 500 aircraft over 10 years. These figures may be on the high side, but much will depend in fact on how quickly Iran is reintegrated into world aviation once sanctions are removed.

Iran’s three major airlines have average fleet ages of 24-25 years, according to the CAPA Fleet Database. Iran’s in-service fleet stands at 225 aircraft in Sep-2015. Iran talks of taking 300 new aircraft within five years and a further 200 in the following five, for a total of 500 aircraft within
10 years. The large aircraft orders are needed to replace Iran’s ageing aircraft and grow the in- service fleet, both of which have been difficult goals to achieve under sanctions. 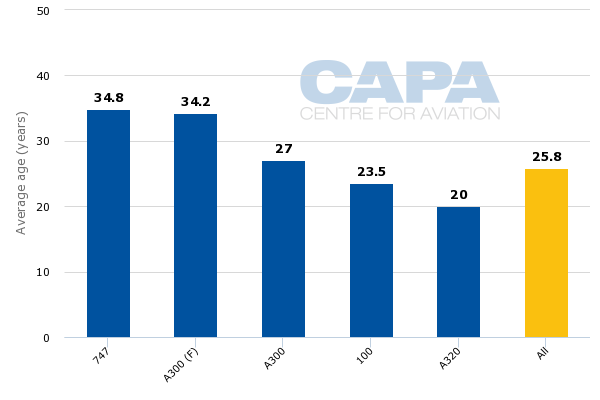 There can be no doubt that Iran holds enormous potential for growth. The question is: how quickly it can realise the opportunity? One argument is that even before the tightening of sanctions Iran did not have a robust aviation industry. Until more recently, acquiring spare parts was challenging. Brain drain in aviation, as in other sectors, has naturally occurred.

The counter-argument is that while sanctions have made life difficult, to say the least, ingenuity has prospered and could be harnessed for aviation growth. There have been a number of aviation accidents, including fatalities, suffered by Iranian carriers, including flagship Iran Air, but the country’s largest airline – Mahan Air – has not suffered a major accident or incurred fatalities.

Growth along the lines of 80-90 aircraft a year would be impressive and would buck industry norms: 80-90 aircraft may not seem like a lot for an entire country – after all, American Airlines in 2014 received 82 new aircraft while China’s four big airlines took delivery of 184 – but Iran is no US or China, and its current fleet size is significantly smaller than both countries, at some 2.8% of the active US fleet or 8.5% of China’s. Even if there is demand, and willingness, to take 80-90 aircraft a year, that places sudden pressure on regulatory oversight, training of employees, maintenance, airspace and aviation infrastructure.

Tehran could potentially emerge as an international hub but networks will be limited initially and Iranian carriers, for now, lack the brands that hub carriers in the Gulf or Turkish Airlines have. Tehran is geographically well positioned for domestic to international connections but an airport transfer is necessary, as IKIA handles international flights only while Mehrabad is almost entirely domestic. The country also plans to construct five new airports in the Araz, Qom and the Ikia regions, with a combined investment requirement of USD8 billion.

Two new airport projects that have been outlined in detail are New Boushehr Airport and New Ahvaz Airport, with close to USD1bn in investment between them. New Bushehr Airport will feature a new terminal, VIP facilities, runway, MRO and cargo facilities. A new four-star hotel development (USD12.7 million) is also planned for the airport. The project is expected to be complete in 2022.

New Ahwaz Airport was announced in 21-Jun-2014 to serve the city and capitalise on an expected increase in travel and trade from the discovery of a nearby oil field. It is believed that the USD507 million facility will replace the previous Ahwaz Airport. An engineering, procurement, construction and financing (EPCF) tender will be issued for the airport project, which will be finalised in 2016.

Iran has a USD404 billion economy that has been likened to “Turkey with oil”, a young and well- educated population of 79 million, and a stock market that, despite sanctions, already has similar capitalisation to Poland’s. The country has had recent success with taming inflation, steadying unemployment and stabilising the currency (Rial).

Tehran offers interesting potential as a global hub, with flight-time advantages over Gulf hubs to almost every region. Indeed, Iran Air CEO Farhad Parvaresh said the carrier ultimately aims to compete with Gulf carriers and their hubs. About 15% to 20% of Mahan’s traffic is transit but the carrier expects more point-to-point traffic as economic conditions improve.

While the risks of doing business with Iran appear to be dissuading serious economic openings at the moment, the country has been well on the radar of interested investors for much longer, due to ever-present market potential coupled with current momentum, and expansion within Iran and the wider region.

For the government, finding the appropriate balance between liberal access and supporting growth of a national aviation capability will be critical to the impact that aviation has on the country’s economy and the speed of its ‘reintroduction’ into the world.