Avianca-TACA primes for re-branding and intensifying competition with LATAM

Avianca-TACA will come full circle during 2H2013 as its various airlines unify under the Avianca brand more than three years after the Avianca-TACA merger kickstarted consolidation in Latin America and drove the decision by LAN and TAM to form what is now the region’s powerhouse LATAM Airlines Group. During 2013 the competition between the two largest airline groups in Latin American will only intensify in the markets where they already compete fiercely – Colombia, Ecuador and Peru.

In addition to continued competitive pressure from LATAM during 2013 Avianca-TACA will also encounter some new competition on international flights from Ecuador and some pressure from startup VivaColombia in its largest market Colombia. At the same time Avianca-TACA continues to battle infrastructure constraints at its largest hub Bogota, which could result in further expansion at its Lima and San Salvador hubs.

The combined entity transported 23 million passengers during 2012, which is a 27% increase from the 18 million passengers Avianca-TACA carried in 2010, the year the two airline groups completed their merger. The figures include Colombia-based Avianca, El Salvador-based TACA and subsidiaries in Central America, Ecuador and Peru but exclude Avianca Brazil, which is not part of Avianca-TACA Holding but is entirely owned by Avianca-TACA's largest shareholder, Synergy Aerospace. 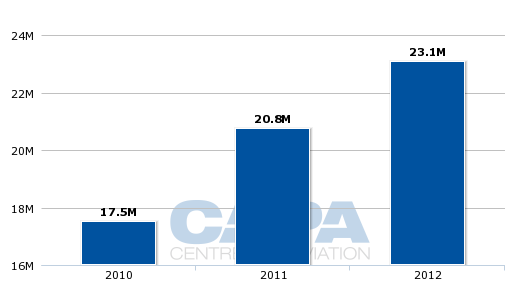 Unifying all the carriers under the more recognisable Avianca brand during 2H2013 will also drive benefits for the combined entity as TACA-branded carriers in Costa Rica, El Salvador and Peru are rebranded. The group’s Ecuadorean subsidiary AeroGal will also transition to the Avianca brand.

Once the rebranding is complete the combined entity will have a much easier time marketing and highlighting its network strength under a single name, which will eliminate any confusion passengers might currently experience when travelling on the numerous subsidiaries presently operating in the Avianca-TACA Group.

Competitive pressure in Colombia will intensify

Avianca’s status as Colombia’s flag carrier results in the carrier commanding a leading status in the market. According to Colombian CAA data, Avianca captured 61% of Colombia's domestic passenger market in 2012 and 41% of the country's international market. The Avianca subsidiary transported 11.5 million domestic and 3.5 million international passengers in 2012, representing increases of 18% and 15% respectively over 2011, according to Colombian CAA data. Avianca recorded 82% load factors for both its domestic and international operations.

When including its sister carriers, Avianca-TACA captured 51% of Colombia's international passenger market in 2012. The group's subsidiaries from Costa Rica, Ecuador, El Salvador and Peru all serve Colombia along with Bogota-based Avianca.

Avianca currently accounts for about 55% of total seat capacity in Colombia, according to Innovata data. This excludes capacity from other carriers in the Avianca-TACA Group. 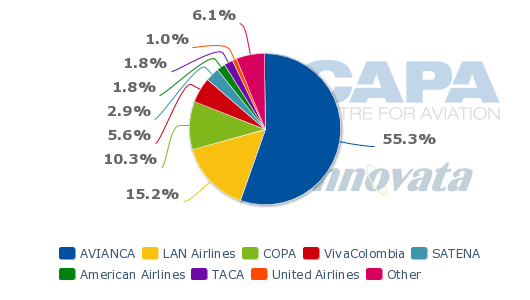 But during 2013 Avianca-TACA will see increasing pressure from LAN Colombia now that it has completed the restructuring of Aires, which LAN purchased in late 2010 and rebranded as LAN Colombia in late 2011. LAN Colombia has since focused primarily on the Colombian domestic market and transported less than 100,000 international passengers in 2012. But LAN Colombia is focusing on international expansion in 2013 and recently placed into service its first widebody aircraft, a 767, which will be used from 01-Apr-2013 to replace A320s on the Bogota to Sao Paulo and Miami routes.

The May-2012 launch of low-cost carrier VivaColombia, who has professed to “ridiculously low fares”, could upset some of the rationality of the Colombian domestic market. Unlike Aires, VivaColombia does not have a large presence at Bogota or on trunk routes. But Avianca has responded to VivaColombia’s market entry by operating some of the secondary markets opened by VivaColombia and matching the LCC’s fares.

While Avianca can absorb offering unsustainable fares for a period of time, it will need a better long-term strategy to compete with Colombia’s first low-cost carrier, which is backed by investment firm Irelandia who is also an owner of Mexican low-cost carrier VivaAerobus. Irelandia is now examining replicating the low-cost Viva model elsewhere in Latin America, which could result in new competitive pressures for Avianca-TACA.

Further competition from LAN Colombia is also expected as LAN Colombia is now looking at using its 767 fleet to launch New York, a market served by Avianca, or Los Angeles, which would re-open a market abandoned by Avianca some years ago. It will be interesting to watch Avianca’s reaction to LAN’s potential opening of a market from Colombia to the US west coast given all of Avianca’s US flights are operated to the US east coast.

TACA operates service from its San Jose, Costa Rica and San Salvador hubs to Los Angeles, giving the Avianca-TACA Group US west coast links to two of its hubs for onward connectivity to the company’s combined network, including Bogota. Avianca and all carriers serving Bogota continue to face operational constraints at the airport, which has resulted in Avianca-TACA looking at ways it can leverage its other large hubs in Lima, San Jose and San Salvador.

Lima emerges as a key hub for Avianca-TACA

Avianca-TACA has already moved to bolster its international service from Lima by positioning in late 2012 two Airbus A330 widebodies for operation by TACA Peru to up-gauge flights to Bogota, Buenos Aires and Miami. It is the first time Avianca-TACA has positioned widebodies outside of Bogota, and shows the company is working to leverage the combined network, with Lima emerging as a strategic north-south hub for intra-Latin America routes.

TACA Peru is now the second largest carrier in Peru’s international and domestic market, following rapid domestic expansion during the last couple of years. Since 2010 the carrier has introduced service to nine domestic markets in Peru, taking advantage of the country’s rapid growth.

In 2012, TACA Peru captured 13% of Peru's domestic market and 12% of the country's international market, according to Peruvian DGAC data. The carrier flew 900,000 domestic passengers and 800,000 international passengers, representing increases of 107% and 50% over 2011.

LAN Peru remains the dominant carrier in the Peruvian market, accounting for 62% of domestic and 33% of international passengers in 2012. Based on current capacity data from Innovata, LAN accounts for 53% of total capacity in Peru compared to 19% for TACA. (Both sets of data exclude sister carriers in the Avianca-TACA and LATAM groups.)

Lima serves as a highly strategic point for both airline groups as it has become a focus for LATAM in connecting north-south traffic flows from North America and helps Avianca-TACA penetrate some markets deeper into South America than those it offers from Bogota and San Salvador. 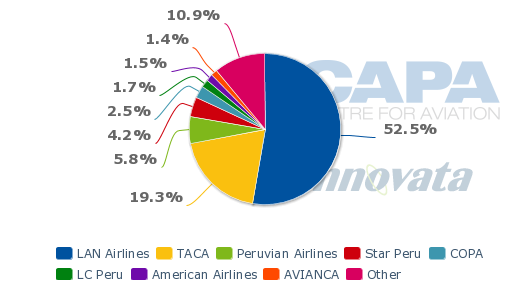 Avianca-TACA has a presence in Ecuador through Ecuadorean subsidiary AeroGal along with service operated by Avianca and TACA. But the country’s largest domestic carrier TAME is injecting new competition for Avianca-TACA on service from Quito to Bogota, breaking a monopoly held by Avianca, and on Quito-Lima, which is served by Avianca-TACA and LAN.

While government-owned TAME is not a traditional low-cost carrier, it entered those markets in 2012 specifically to capitalise on their profitability and an opportunity to undercut fares. During 2013 it will be interesting to see how those particular markets evolve as TAME is Ecuador’s largest domestic carrier but both LATAM and Avianca-TACA also serve the domestic market through their respective subsidiaries LAN Ecuador and AeroGal.

AeroGal currently accounts for 11% of total capacity in Ecuador, making it the third largest carrier behind TAME and LAN Ecuador, according to Innovata data. TAME accounts for a leading 33% of capacity while LAN accounts for 23%.  (The AeroGal and LAN Ecuador figures exclude capacity provided by sister carriers in the Avianca-TACA and LATAM groups.) 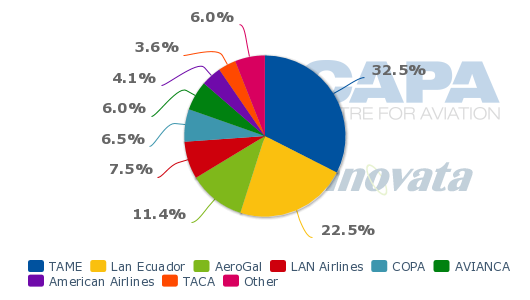 While TAME holds a strong position in point of origin in Ecuador, it has little exposure in Bogota or Lima as it is just dipping its toes in international service. Even with government backing TAME faces a tough time competing with the network scale consolidation has afforded LATAM and Avianca-TACA. TAME is competing with both groups on service to their strategic hubs, which offer connections throughout Latin America, something TAME lacks as it just resumed offering international service in 2010.

Given LATAM’s subsidiaries in Argentina and Chile, the company naturally has an advantage in southern South America. But Avianca-TACA’s hubs in San Salvador and San Jose give it an advantage over LATAM in Central America.

However, Avianca-TACA faces a formidable competitor in Central America as Copa has leveraged the geographical position of Panama’s Tocumen Airport as an optimal transit point for north-south traffic flows. Unlike the challenges Avianca-TACA faces in Colombia and to a lesser extent San Salvador, the Panamanian government has backed expansion at Tocumen. A new 12-gate concourse opened in 2012 and this year a new project is scheduled to commence that will eventually supply 20 additional gates. 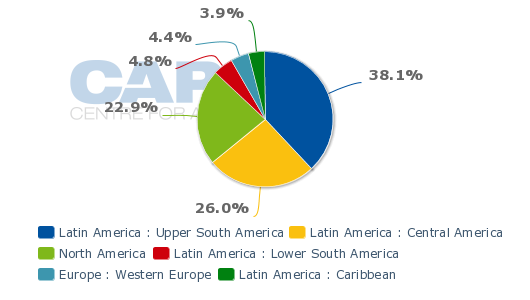 As the history of Latin American aviation evolves, Avianca and TACA through their 2010 landmark merger will be credited for ushering in consolidation into the relatively young market. But while consolidation drives a certain level of rationality, like other global regions Latin America has its own nuances that drive a different set of competitive dynamics. The combined Avianca-TACA is a formidable competitor to the might created by LAN and TAM morphing into LATAM, but Avianca-TACA’s relative weakness in the Southern Cone to LATAM could create challenges in the future, as Argentina and Chile are the fourth and fifth largest markets in the region.

Avianca-TACA does not have a measurable presence in that region, and its stature in the largest Latin American domestic market Brazil is somewhat limited. Sister carrier Avianca Brazil, while rapidly growing, still only accounts for a 5% share of the domestic market while TAM has a majority 41%.

Despite some geographical weaknesses Avianca-TACA does have strategic coverage in Central and South America and also has the advantage of completing its merger 30 months ahead of LATAM, whose larger scope required closer scrutiny from regulators. After finally gaining approval in 2012 after a 21-month process to get the proper endorsement for their merger, LAN and TAM have just started studying how to maximise their combined network.

While LATAM is the new powerhouse in Latin America, the combination of Avianca-TACA provides a formidable competitor if the company continues to sustain profitability and successfully leverages the key points in its network.