There are now clear signs the Australian aviation market is entering a light slowdown, with carriers adding capacity ahead of demand while airfares decline marginally. This will affect the region's carriers differently and they should all fare better than counterparts elsewhere in the world; notably, the market in Australia is still growing, but not as fast. Most exposed are Qantas mainline and Tiger Airways Australia. The former has been slowly losing some corporate business to Virgin Australia and competes with a higher cost base.

Tiger is suffering from group-wide over-capacity and would not be able to redeploy capacity as readily. Unlike Tiger, Jetstar has a healthy and rapidly growing pan-Asian network that can absorb any surplus capacity and at a higher margin even than in Australia. Virgin Australia is seeing yield growth from its transition to a business carrier, growth that should overcome any weakness in the more leisure-exposed areas of its business.

Should the downturn become any more significant, the Qantas Group will be further pressed to justify maintaining a 65% market share when more profitable opportunities exist in Asia – while banks and aircraft financiers ponder if they will continue to give Qantas favourable leasing rates following its credit downgrade.

As is evident from the graph below, capacity is still being added to Australian domestic routes (although the percentage growth figures are to some extent inflated by last year's reductions due to the Queensland floods). 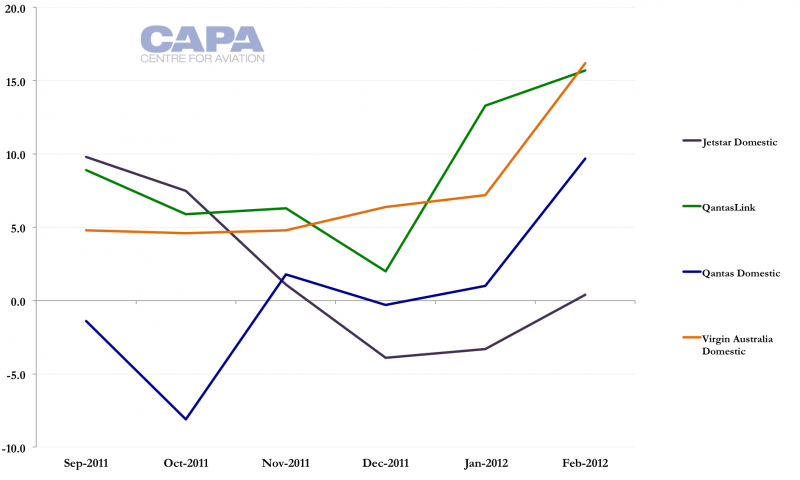 But the result of these capacity adjustments has been to drive down load factors – the conspicuous exception being Jetstar, whose capacity has remained constrained. 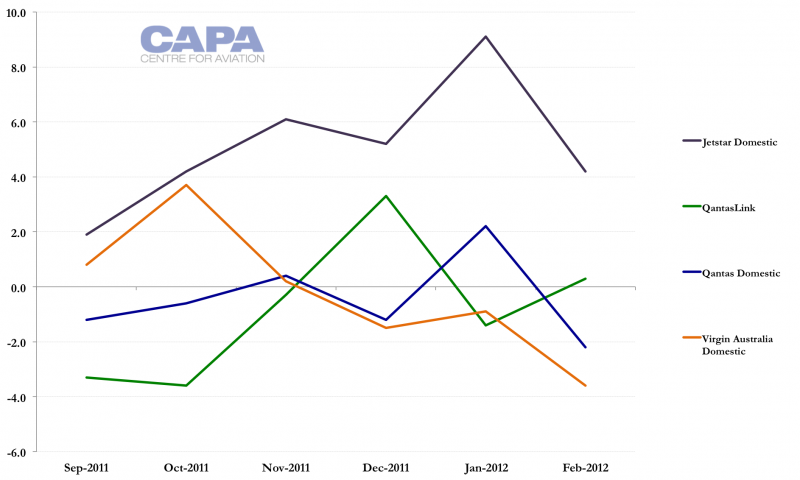 With the exception of Jetstar, Australian carriers are pumping excess domestic capacity into the market, each with their own justification. Virgin Australia explains its increased focus on the corporate market and its associated higher yields allow it to increase capacity ahead of demand as higher yields make up for the shortfall. But clearly Virgin would prefer both higher yields and demand. Qantas makes no secret its capacity is driven by the goal of retaining its 65% domestic market share. As CEO Alan Joyce remarked in Feb-2012 at the carrier's half-annual results about reducing capacity, “The ability for us to scale back is a consequence of our competitors not adding as much capacity as believed.” The converse appears to be true.

The carrier reaffirmed this in a note to the stock exchange, saying, "Capacity growth in the domestic market is forecast to increase...largely driven by substantial domestic capacity growth by competitors. In this context, the Group remains focussed on its profit-maximising 65 per cent domestic market share." As shown in the graph below, Qantas Group's domestic capacity growth has been tracking Virgin's, with the exception of Oct-2011, when industrial action and the temporary shutdown of the Group decreased available capacity. 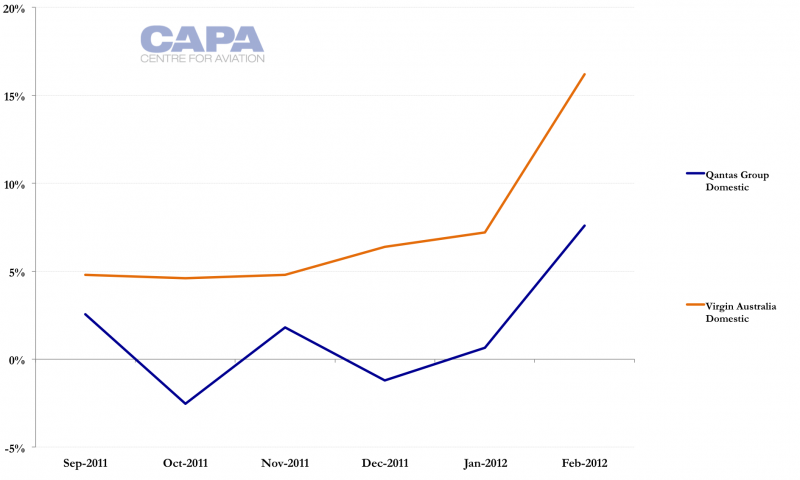 The slowdown comes as carriers had been enjoying higher yields as a result of Tiger's grounding and return to market. When Tiger returned, it did so with higher fares than before, allowing competitors to increase fares.

In the latest index of consumer domestic fares, as measured by the Bureau of Infrastructure, Transport and Regional Economics (BITRE), the lowest economy fare, despite falling from highs mid/late last year, has risen, partially as fuel prices increase. Qantas has announced further fuel surcharges across its network. Higher fuel prices limit fare discounting to incentivise demand. 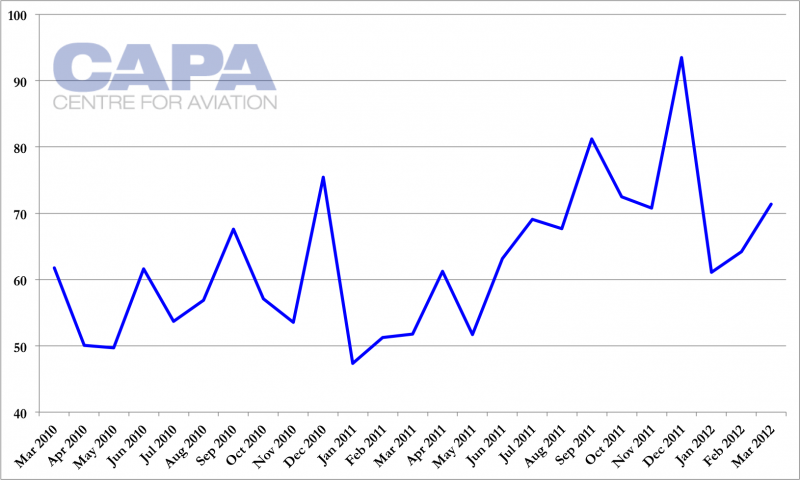 International load factors have consistently displayed weakened performance of late, notably due to Jetstar's rapid increase in international capacity. Virgin's Australia sharp decrease in Feb-2012 capacity was due to it taking a Boeing 777 out of operation for maintenance. This affected its Sydney-Abu Dhabi route, with Etihad operating additional capacity to compensate for the loss. 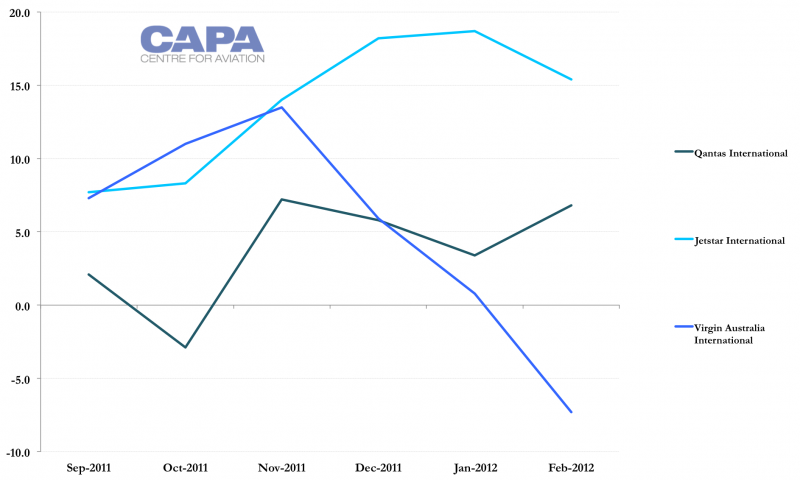 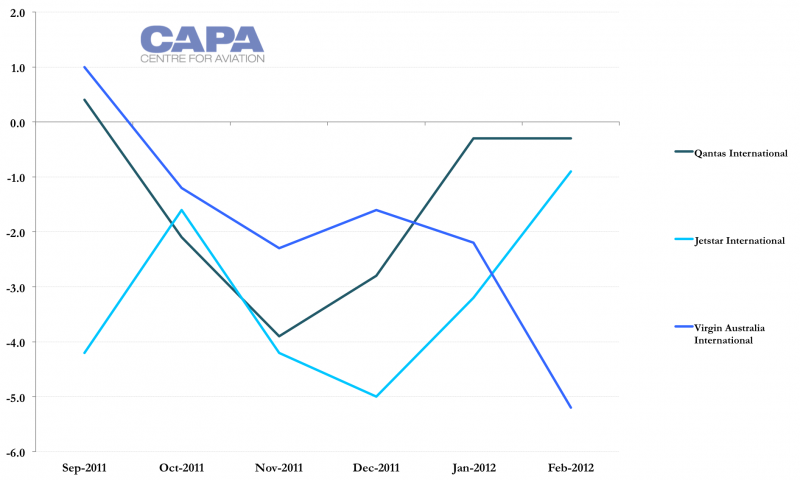 Qantas has affirmed it will continue in 2HFY2012 its growth of 5-6% across the group. As CAPA reported in Feb-2012 of Qantas' short-term growth plans:

The Qantas Group in 2HFY2012 plans to increase capacity by 7%, equivalent to 5% after accounting for weather disruptions and the A380 grounding in 2HFY2011. That growth represents 3% for Qantas and 20% for the Jetstar Group. Jetstar domestically will grow 9% while international operations will grow a staggering 28%.

Additional capacity expansion is likely to see further weakened load factors and yields. Investors will be pressing Qantas to justify the growth and logic of the 65% market share rule, while Qantas may find it a little harder to finance growth after its credit rating downgrade in Jan-2012 to Baa3/stable – although the carrier remains one of the few rated as investment grade.

Jetstar will be the most adept at reallocating capacity should it choose to do so. Its Singapore-based operation is more profitable than Australia and, unlike Tiger Airways' Singapore operation, has been able to absorb capacity. Jetstar this year is also ramping up its Vietnamese and forthcoming Japanese operation.

Tiger Airways, however, is more limited. Its planned venture in Thailand has ended while its partnership with SEAir in the Philippines is stalling. While its Indonesian subsidiary, Tiger Mandala, has been cleared and will shortly commence flights, it has a large launch fleet due to Indonesian requirements. It is unlikely to require additional capacity in the near future. Tiger had planned to scale back its Australian fleet but has since reversed that decision.

Qantas and Virgin have routinely stressed the flexibility they have with aircraft to accelerate or slowdown on growth depending on market conditions.

The strong yield growth Virgin Australia has experienced in the past nine months should continue and partially shield it from any slowdown, although its varied operations will be affected differently. Most exposed will be its short-haul international 737 operation, which is strongly leisure-driven and with a cost base higher than Jetstar for marginal onboard differences. Its trans-Tasman operation could benefit from continued integration with Air New Zealand, but the Trans-Tasman market was one of the first markets to show a slowdown, with Air New Zealand and Virgin this year offering two significant sales of AUD150 off return trips typically costing approximately AUD400. Virgin's long-haul 777 operation should remain strong. 14 of 17 weekly returns are to Los Angeles, where the US market is showing a rebound and closer integration with Delta will enhance financial performance. The remaining three weekly returns are to Abu Dhabi, and function as feed from primarily Europe, which is showing no signs of improving, although continued growth at Etihad (Virgin's partner on Abu Dhabi services) will benefit the route.

Partners in general will benefit Virgin's domestic network. Virgin continues to develop network alignment with Singapore Airlines, which should contribute a notable increase in revenue.

Domestic passenger numbers grew 1.4% in Jan-2012 compared to Jan-2011, according to the BITRE's latest domestic statistics. Of the 55 largest routes based on enplaned passengers, the three routes with growth over 20% serve the resource industry and all originate from the industry's hub in Perth.

Top 10 growing routes (in thousands) of the 55 largest domestic routes in Australia: Jan-2012

Although actual numbers at the regional Western Australian points are small, the aggregated effect of the resource boom, including increased trans-continental dual class capacity from Virgin Australia in particular, has helped Perth Airport record record traffic. Jan-2012 domestic passengers are up 13% year-on-year. In comparison, Jan-2011 figures grew 11%. The airport in 2011 recorded 9% growth, matching 2010's 9% growth. Growth in 2009 was 5% higher than 2008. Feb-2012 traffic is up 19% year-on-year. 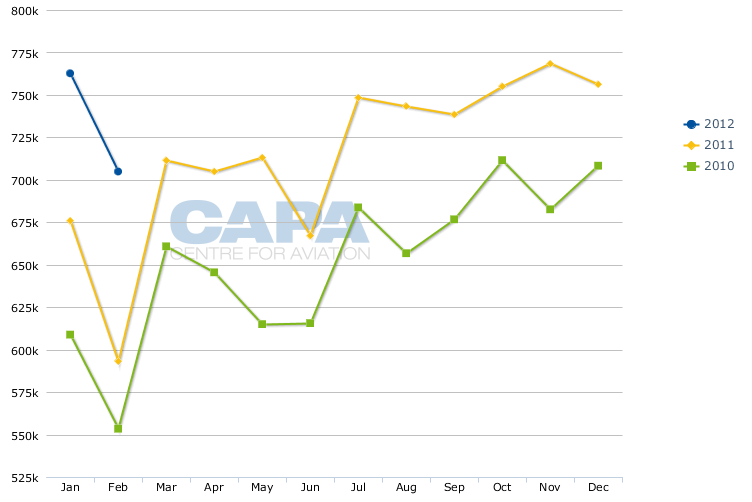 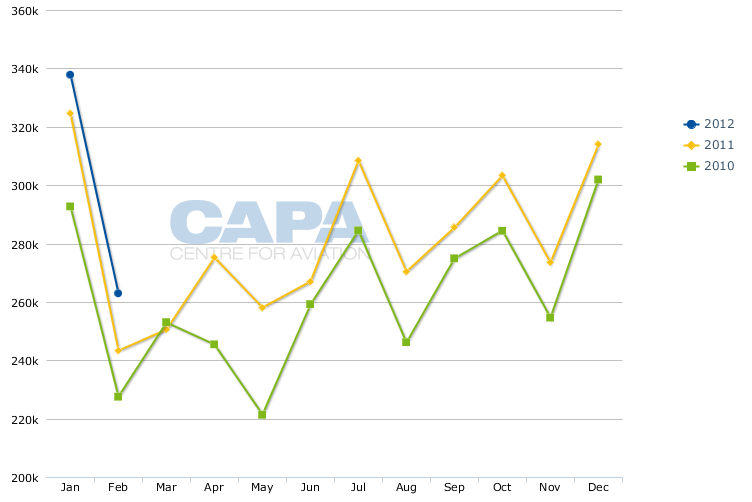 Some of the routes with the largest declines in passenger numbers are routes where Tiger Airways has suspended service, either as a result of a network restructure undertaken in early Jun-2011 (such as ending the Sydney-Gold Coast route) or the network restructure after it resumed services in Aug-2011 following a six-week grounding (Melbourne-Adelaide services, amongst others, were not resumed).

Ten largest declines in passenger figures (in thousands) of the 55 largest domestic routes in Australia: Jan-2012

Even prior to Tiger's Jun-2011 grounding, Gold Coast Airport was seeing 2011 traffic below 2010 levels. Persistent rain and widespread floods made 2011 a poor holiday season. 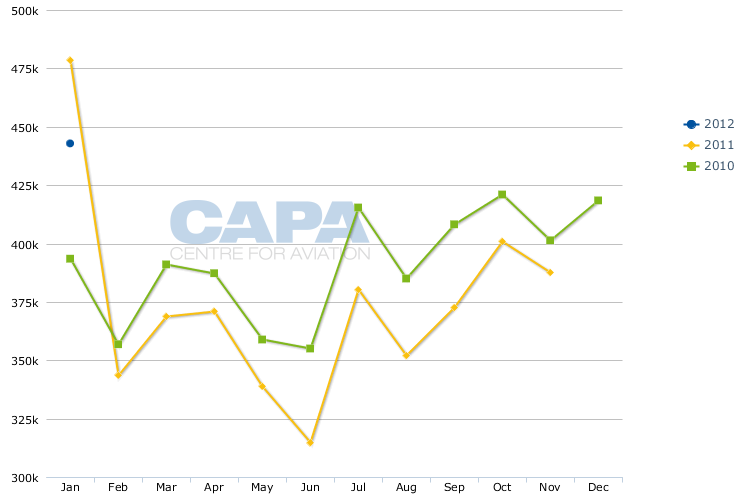 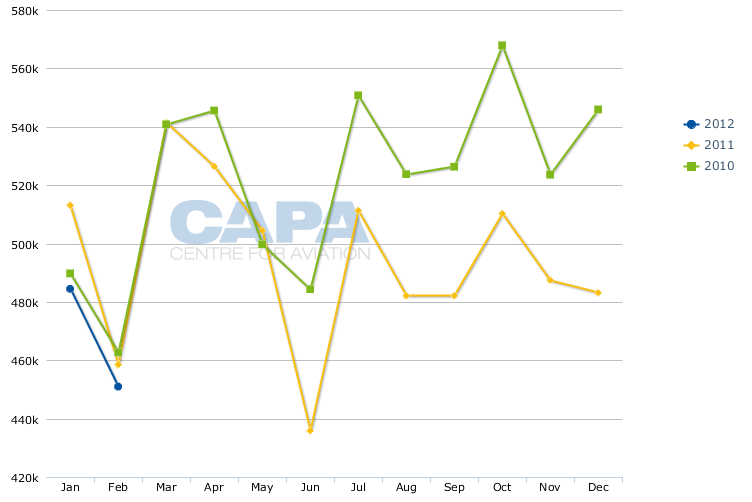 Like Gold Coast and Adelaide, Sydney saw 2011 traffic dip below 2010 figures. Although Sydney was a large virtual hub for Tiger, Tiger's traffic was only a small proportion of total domestic movements. 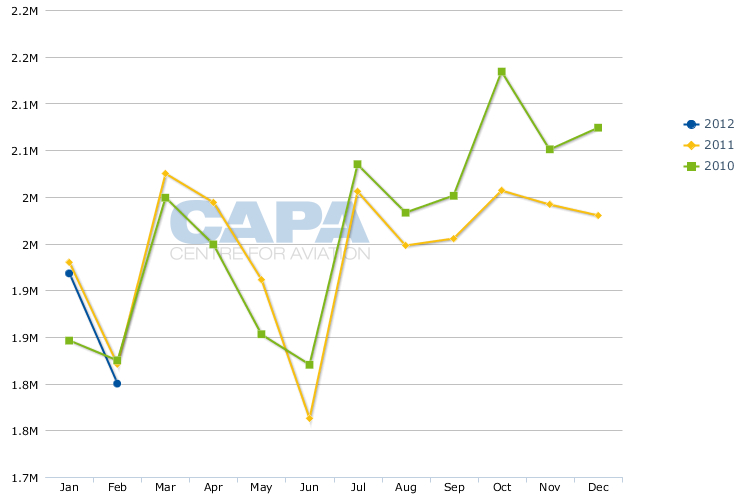 Brisbane Airport's traffic growth declined during Jul-2011 and Aug-2011 when Tiger's grounding occurred, but even set in the month prior. Still, Brisbane kept 2011 domestic figures above 2010, and in early 2012 saw large growth as the airport has held up due to corporate and resource industry traffic, although much of it was put in the system early/mid last year. 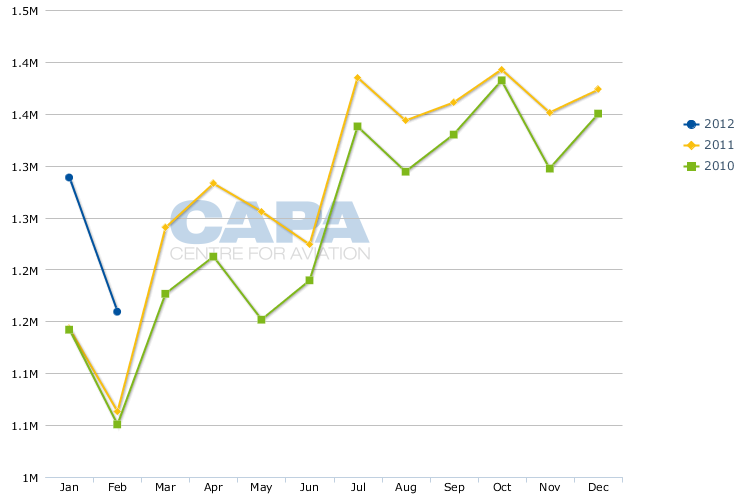 Melbourne Tullamarine's traffic, as the main base for Tiger Airways, understandably dipped after Tiger's grounding and only partially recovered when Tiger resumed operations. Traffic growth has largely been supported by increased international operations. (Note: Melbourne does not split domestic and international monthly traffic.) 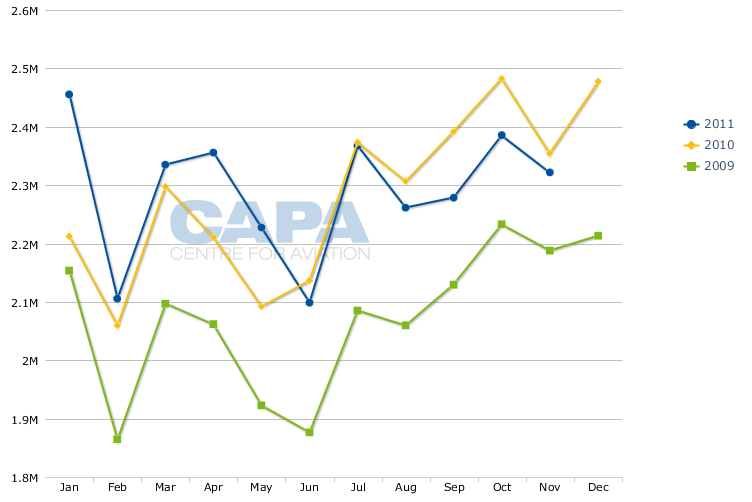 The two themes persist: capacity up and demand down

Amid these mixed effects, there appear to be two consistent threads as 2012 progresses: an almost inevitable growth in capacity as Virgin Australia challenges for more premium passenger space along with an accompanying disparity with demand as the economy apparently slows.

So long as Tiger maintains its present quiet profile, without the aggressive pricing strategies it followed prior to last year's grounding, Jetstar too can keep its claws partly parked. But if Tiger recommences its fiercer approach, this may provoke Jetstar also to return capacity to constrain market share shifts.