Indian shares fell for a sixth session on Wednesday, sliding 2.9% to their lowest close in nearly 12 weeks, with Asian stocks (the MSCI Asia Pacific Index) down for an eighth consecutive day, as investors joined a regional sell-off on concerns China's efforts to cool credit demand could hurt the global recovery.

The Indian carriers were the hardest hit yesterday, with Jet Airways and Kingfisher shares slumping by more than 10% (reductions of 11.2% and 10.1%, respectively), with SpiceJet’s shares down 7.7%.

Among the non-listed Indian carriers, Air India reported improved, but still significant, losses in the three months ended Dec-2009, with an operating loss of USD189 million and a net loss of USD321 million (compared to losses of USD251 million and USD356 million in the previous corresponding period).

IATA, upon the release of Dec-2009 and FY2009 passenger statistics, stated Asia Pacific carriers stand out as benefiting most from the year-end upturn in demand, as the region experiences a “significant economic upturn”. Carriers in the region experienced a 5.6% decline in passenger demand in 2009, with an 8.0% year-on-year improvement in Dec-2009. See related report: 2009 was a terrible year for aviation (except for the Middle East)

ANA to capitalise on JAL weakness, with international and cargo expansion in FY2010

The carrier stated that, due to the "lethargic nature of economic recovery, the trend of slow recovery for the Japanese aviation business is likely to continue", although 2010 will, conversely, be a "year of expansion for ANA". Factors such as anticipated capacity increase at Tokyo's Haneda and Narita airports, the scheduled first delivery of the B787, as well as open skies between Japan and the USA will bring "important business opportunities for ANA to expand", according to the carrier.

ANA plans to reduce domestic passenger capacity (ASKs) by 3.7% year-on-year, while increasing international passenger capacity by 11.2% and cargo by 21.1% in 2010, with the carrier taking delivery of 25 aircraft during the year, and retiring eight aircraft. 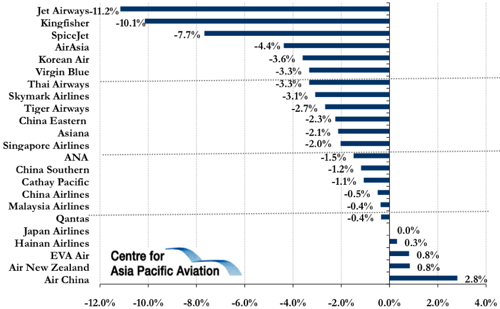