Economic weakness in Europe and the US is having a financial impact on Asia’s airlines, with margins pressured by the combination of high oil prices and slower demand. According to Association of Asia Pacific Airlines (AAPA), the situation is also impacting medium-term growth prospects, as indicators point to a continuation of present market weakness into 2012.

However, the region's carriers are better placed than most. Despite the expectation of more “modest revenue growth” and the “squeezing” on what is “already very thin margins”, Asia Pacific airlines are better placed than their European and US counterparts, as many of the region's economies are still experiencing solid growth, and long term prospects are “positive”, according to AAPA. The industry body added that the optimism regarding future growth opportunities underpins “ambitious fleet expansion plans, as well as the establishment of a number of new carriers of varying business models, including international partnerships and joint ventures.”

AAPA Director General Andrew Herdmann commented: “Resilient Asian economies, with relatively strong domestic spending power, helped support leisure and business travel markets. However, a slowdown in export demand, as a result of the ongoing European economic crisis and softening North American economies, contributed to the fall in overall cargo traffic. As a result, Asian airlines have seen only modest revenue growth this year. At the same time, airlines have had to grapple with a 40% increase in jet fuel prices, squeezing what are typically already very thin margins”.

Concerns about the outlook, and weakness in freight and international markets have been echoed by a number of carriers in the region lately.

EVA Air president Chang Kuo-wei this week stated the carrier expects to see a continued decline in air cargo shipments from Taiwan in 2012 as the air cargo business experiences its "worst year" in over a decade.

Meanwhile, China's CAAC has downgraded its 2011 traffic forecast, with passenger traffic growth downgraded from 13% to 8%. Chinese cargo traffic growth is now expected to be flat when compared to the previous year. China Southern has stated it has seen a slowing in the China domestic aviation market since the end of Aug-2011 while China Eastern Executive director Luo Zhuping recently commented the carrier is “not optimistic about the international market in the next two years, for the weakening global economy hurts air travel”.

Cathay Pacific, meanwhile, warned that "there is no sign yet of the traditional year-end peak beginning" for cargo traffic.

Asia is also important for many carriers outside the region. Finnair CEO Mika Vehviläinen, this week said he has seen "some indications that the global economy has also started to have an impact on the Asian demand". He cautioned: "The state of [the] global economy will shake the competitive positions in the industry as well as the viability of airlines in an unprecedented manner." 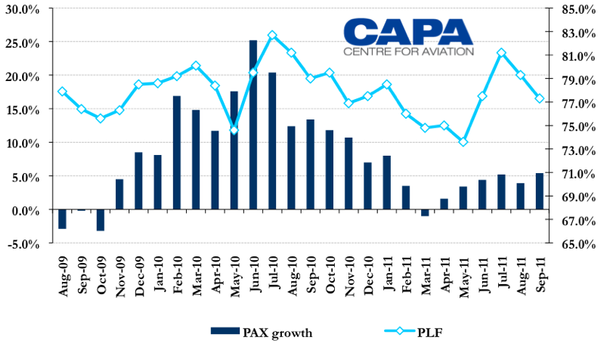 AAPA members handled 16.0 million international passengers in Sep-2011, a 5.4% year-on-year increase, underpinned by business and leisure demand on Asian routes. Passenger numbers have increased in all but one month (Mar-2011) of 2011 and in every month of 2010.

International traffic (RPKs) increased 5.2%, outpaced by a 6.8% capacity (ASKs) expansion, resulting in a 1.1 ppt reduction in load factors to 77.3%. International capacity growth at Asia Pacific airlines has exceeded traffic growth for the past 10 months. As a result, load factors have also declined for the past 10 months (Dec-2010 through Sep-2011) after 16 consecutive months of year-on-year gains between Aug-2009 and Nov-2010. 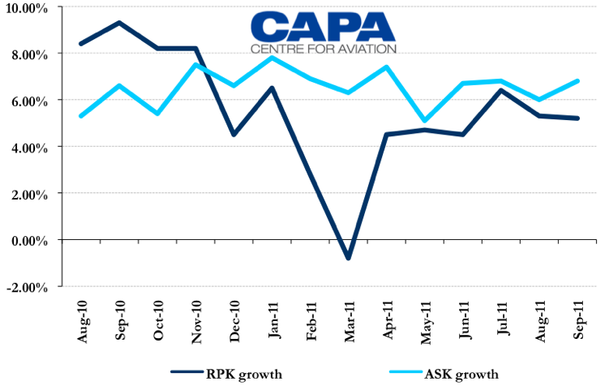 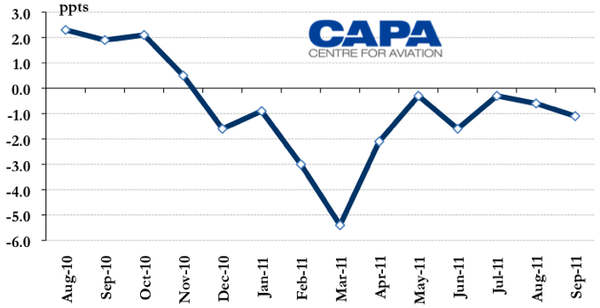 In the first three quarter of 2011, Asia Pacific airlines saw a 3.7% increase in the number of international passengers carried, whereas international air cargo demand weakened by 4.1%.

IATA, in its Financial Forecast released in Sep-2011, stated worldwide passenger demand has been stronger than anticipated given the gloomy economic outlook. The forecast for the year stands at 5.9% growth (up from 4.4% projected in Jun-2011).  IATA anticipates traffic (TKPs) growth of 2.8% in the Asia Pacific in 2011, outpaced by a 4.1% increase in capacity (ATKs). The imbalance between supply and demand in the region is expected to be rectified in 2012, with traffic growth of 6.4% outpacing an anticipated capacity increase of 6.2% in the region. Asia Pacific traffic increased by 12.6% in 2010, following declines in both 2008 and 2009, with capacity growth of a more modest 5.8% in 2010, according to IATA.

Asia Pacific carriers are expected to return a USD2.5 billion profit in 2011 (EBIT margin of 2.9%), marking a USD400 million upgrade from its Jun-2011 forecast. IATA noted that while this is the largest absolute profit for any region, the Asia Pacific has also seen the “most dramatic downturn compared to 2010” when the region delivered USD8 billion profit. IATA added that “stronger Asian economies and intra-region travel and trade flows should enable Asia-Pacific airlines to sustain their profitability through 2012”.  IATA expects a USD2.3 billion profit in FY2012, for an EBIT margin of 2.8%, in the Asia Pacific.

As a result of a slowdown in trade activities, Asia Pacific international air cargo demand (FTKs) declined by 6.5% year-on-year in Sep-2011, for the sixth consecutive month of year-on-year declines. Cargo capacity was reduced by a lesser decrease (-1.3%) resulting in a 3.5 ppt decline in the average international air cargo load factor for the region’s carriers to 63.8%. 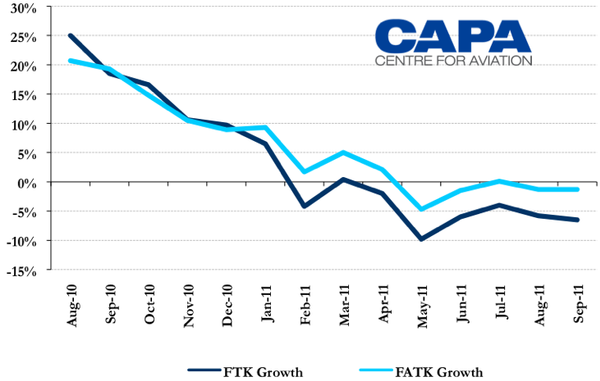 IATA in its 3Q2011 cargo e-chartbook, released on 26-Oct-2011, noted that the past quarter has seen cargo markets “deteriorate significantly”. Weakness has been experienced across all major markets, particularly in Asia. The weakest major trade lane is Within Far East, where volumes are down 10% year-on-year. 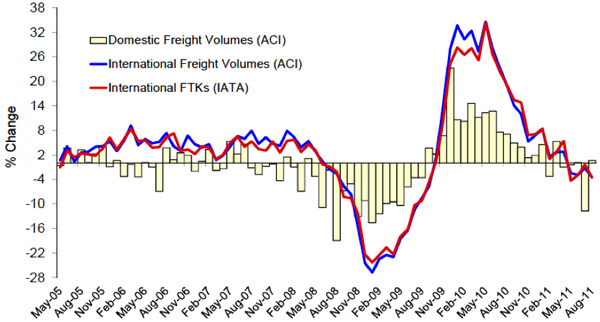 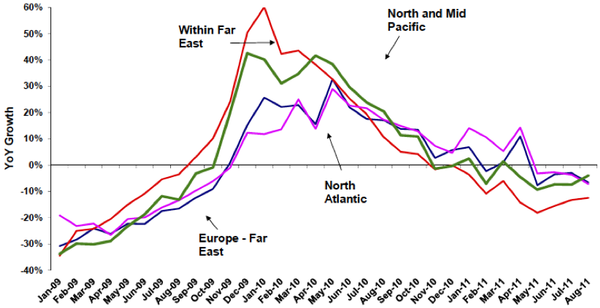 Cargo rates have come under downward pressure from weak demand and falling utilisation, IATA noted, adding that overall rates are 4% down and rates between Southeast Asia and Europe have slumped 19%. However, surcharges have been rising sharply over the past year, reflecting the 30-40% increase in jet fuel costs. Including these surcharges suggests that yields were still rising on average up to Jul-2011 although the situation subsequently deteriorated. Overall, cargo profitability, which began to fall in 2H2010, has declined further this year, and revenues are weak. 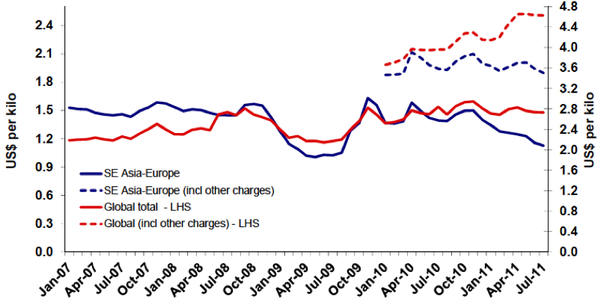 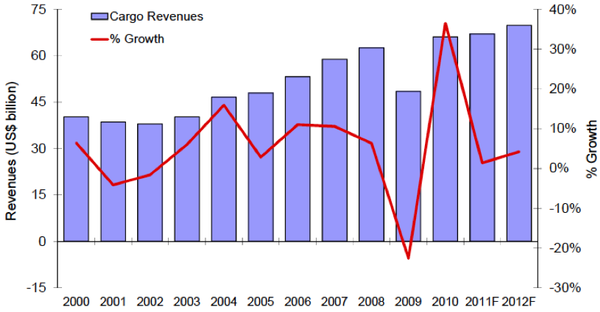 As a result in the stagnation of global air freight demand since the beginning of 2011, IATA has significantly reduced its full-year freight volume growth projection from 5.5% to 1.4%, as per its Sep-2011 financial forecast. Airlines are expected to carry 46.4 million tonnes of cargo in 2011, down from the previous forecast of 48.2 million, according to IATA’s forecast. Air freight volumes reached their post-recession peak in May-2010, largely driven by re-stocking. Jul-2011’s traffic was 4% lower than that level with IATA cautioning that it “appears unlikely that a revival in air freight will begin before 2012”.

IATA added that the weakness of air cargo markets is disproportionately affecting airlines from the Asia Pacific region owing to the larger share of cargo in airline revenues. The shocks from the Japanese earthquake and tsunami continue to affect supply chains and cargo markets, in which Asia Pacific carriers have the largest market share.

While Asian airlines have been less susceptible to the current bout of global economic weakness, the impact is now being felt by the region’s airlines. The uncertainty has had a significant impact on freight demand to/from Asia, and is affecting international passenger volumes. This ultimately will have an impact on revenue and profits for the region’s airlines in 2H2011 and into 2012.