The General Administration of Civil Aviation of China (CAAC) has cut its official air traffic forecast for 2011 as international passenger and cargo volumes weaken amid deteriorating global economic conditions. It comes as China Eastern Airlines became the first Chinese airline to cancel B787 orders, opting instead for A330s and smaller B737s. China's passenger growth forecast has been cut from 13% to 8% this year to 288 million passengers - some 13.4 million fewer passenger than previously anticipated - but up from 267 million last year.

The air cargo growth forecast has meanwhile been dramatically slashed from growth of 11.5% to flat in 2011, a repeat of 2008 when world economics bottomed out. China's airlines are now expected to handle 5.6 million tonnes of air freight, against 6.4 million tonnes forecast previously.

China Eastern Airlines executive director Luo Zhuping said this month the global economic slowdown had made it more difficult for Chinese carriers to operate long-haul international routes. Separately he noted the carrier is “not optimistic about the international market in the next two years, for the weakening global economy hurts air travel”.

However, with China Southern – who ordered B787s at the same as China Eastern – not expected to receive its first B787 until Jul-2012 at the earliest, it is unlikely China Eastern would have had a notable number of B787s it could not deploy during the short-term forecast Mr Luo projects. If China Eastern wanted to avoid any new long-haul aircraft during the next two years, Boeing would certainly have found other B787 customers wanting earlier slots, indicating China Eastern's B787 cancellation is part of a shift in fleet strategy (see section below).

Yet China's long term growth forecasts remain unchanged, with an increase to 450 million passengers still expected by 2015, despite the impact of high speed rail.

2010 was clearly a banner year of recovery after the downturn in 2008/09, but 2011's volumes have been well below expectation, particularly since the middle of the year. 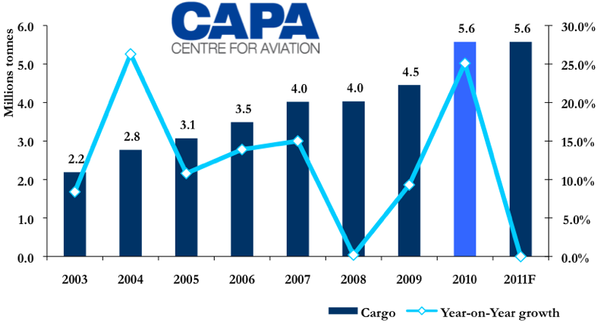 China Eastern's fleet change appears driven by the need for more narrowbody aircraft to match expected domestic and regional capacity while not shutting the door on widebody expansion – with the B737/B787 announcement China Eastern also disclosed it was ordering 15 A330s, 12 -200s and three -300s for delivery between 2013 and 2015. By dropping its order of 24 B787s (15 for China Eastern and 9 for Shanghai Airlines, a subsidiary of China Eastern) for 45 B737NGs China Eastern retains the value of its order, with concessions, and Boeing was likely obliging as the B787s it sold to China Eastern were likely under-priced while the B737NGs were sold at more sustainable pricing levels.

While China Eastern has shut the door on low B787 pricing, it can instead gain cost reductions by operating only an A330 fleet in the medium-term instead of an A330 and B787 fleet. China Eastern's 21 A330s were delivered late last decade, making them unlikely to be replaced in the near future. This shows the A330 can in some markets be a competitor to the B787.

"The purchase of the [A330] aircraft will further optimize the overall fleet structure of the company, enhance the route coverage of the company and increase the economic benefit to the company," China Eastern said in a separate statement.

The deal with Airbus also covers the airframer taking all five of China Eastern's A340-300s, relatively old aircraft that are falling out of favour with the market, partially due to fuel inefficiency.

The world’s largest freight operators have foreshadowed continued weakness in the sector for the remainder of the year and into 2012 based on the current economic weakness and deteriorating consumer and business confidence indicators. This weakness in freight traffic, in turn, could foreshadow a weakening in international passenger markets.

IATA, earlier this month, noted that China is not immune to global economic pressures. "This weakness in a key driver of business travel is widespread, affecting even the Chinese and Indian economies" where the confidence has "fallen sharply in recent months", IATA noted.

China Statistics Bureau data for 3Q2011, released on 18-Oct-2011, revealed that China’s GDP increased by 9.1% in the quarter, marking the slowest pace of growth since 2009, and adding to concerns about global economic conditions as Europe’s debt crisis deepens. A gauge of Chinese production compiled by HSBC Holdings and Markit Economics shrank for a third consecutive month in Sep-2011.

The Conference Board similarly noted on 18-Oct-2011 that while economic expansion in China is expected to continue, the rate of growth will slow "in light of domestic monetary tightening and weakening global growth". The Conference Board continued: "Despite continued gains in the composite Leading Economic Index this year, the main drivers of the upward trend, bank credit expansion and real estate investment, continue to slow compared to 2010. Meanwhile, the cooling of external demand from the US, the Euro Area, and Japan may be adding to slower growth".

Chinese carriers reported a 38.8% slump in profits in the month of Sep-2011 to CNY3.7 billion (USD582 million). CAAC attributed the profit decline to the economic downturn in the US and Europe and the decline in international cargo demand. The growth in domestic traffic, especially in the fast-growing and high-potential central and western China, helped to maintain profitability. Revenue growth of 17.7% to CNY31.83 billion (USD5.0 billion) was outpaced by a 28.1% increase in operating expenses to CNY27.7 billion (USD4.3 billion).

In the first nine months of 2011, China's air passenger volume increased 8.8% year-on-year to 219 passengers, while air cargo declined 1% to 4.1 million tonnes. During the third quarter, passenger numbers increased 7.5% to 79.9 million and cargo volumes fell 0.7% to 1.4 million tonnes, with the weakness let by a 5.8% reduction in international cargo volumes.

In light of this performance, the CAAC's annual targets were looking less attainable by the day, so it is no surprise the regulator has revised its short-term outlook. The move effectively scotches hopes for a powerful end-of-year rally in air freight markets.

During Sep-2011, passenger numbers increased 9.7% to 25.0 million and cargo volumes weakened 3.5% to 506,000 tonnes. Passenger growth increased at the slowest pace in Aug-2011, with the rate of growth slowing to just 4.5%, the lowest rate since Sep-2008. Passenger traffic  in China has grown on average 15.3% p/a over the past decade, or around three times the world average for the same period. 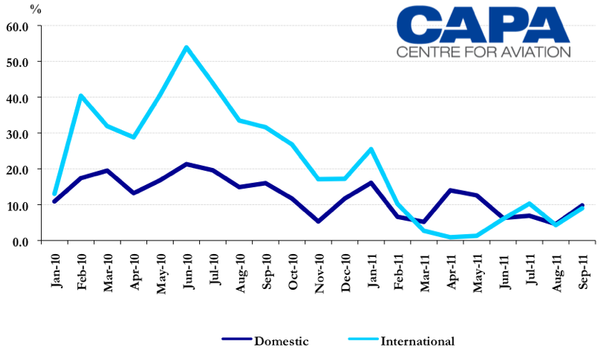 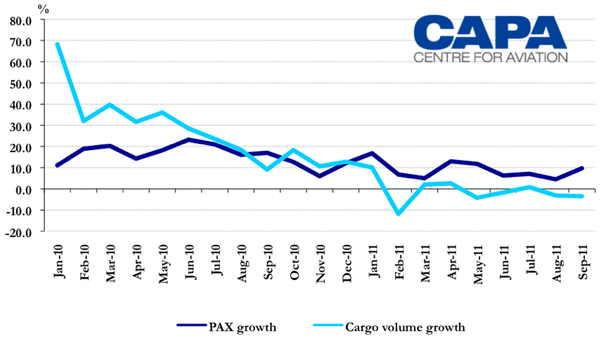