IATA reports that Asia Pacific carriers experienced a 6.5% increase in demand in Jan-2010, adding that “of the improvement in demand seen since the early 2009 low point, 31% has been realised by carriers in the region, which is leading the global economic recovery”.

Thai Airways’ shares gained 9.7% yesterday, rising to their highest level in more than four months in Bangkok trading, as the carrier announced it would pay a dividend of THB0.25/share for its 2009 operations.

The dividend was announced after the airline reported a better-than-expected FY2009 net profit (of USD222.5 million, compared to a loss of USD647.7 million in the previous corresponding period) and a positive profit outlook for 2010 (the carrier expects to increase profitability levels by 10-15% in 2010, adding that it expects record load factors of approximately 80% in Jan-2010 and Feb-2010).

The share price gain also coincided with the carrier’s Board approving a plan to sell as much as THB40 billion (USD1.2 billion) of bonds over the next five years. The carrier stated the funds would be used for working capital and to repay maturing debt. The plans will now be recommended for shareholder approval on 28-Apr-2010.

In the Indian market, Jet Airways soared 15.0%, with SpiceJet and Kingfisher also stronger, gaining 5.8% and 5.6%, respectively.

The share price gains by the nation’s listed carrier reflects overall improvement in the Indian stock market, with the 30-share BSE index posting its best one-day percentage gain in 2010 to close at a five-week high yesterday (+2.1%). Investor confidence was upbeat after a three-day weekend, following the release of the national budget on 26-Feb-2010.

On the other end of the spectrum, Malaysia Airlines’ shares slumped 7.2% yesterday, the largest drop in almost two years (since Mar-2008) in Kuala Lumpur trading, making the carrier the worst performer on the MSCI Asia Pacific Index yesterday. The share reduction occurred ahead of the 03-Mar-2010 deadline for the acceptance and payment for the rights issue shares. 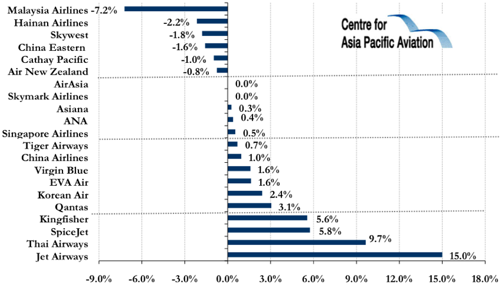