Shares in the major Asia Pacific LCCs slipped on Friday (03-Jul-09), with Virgin Blue, AirArabia, AirAsia and SpiceJet shares down by 3.3%, 2.1%, 1.7% and 1.0%, respectively, reflecting general weakness in Asia Pacific markets.

The majority of European LCCs gained, led by Norwegian Air Shuttle (+8.1%), while US stocks were closed on Friday.

easyJet and Ryanair gained 1.5% and 1.3%, respectively, as investors welcomed continued strong traffic growth by Ryanair last month (passenger numbers up 13% to 5.84 million and load factor up 1 ppt to 85%).

Both carriers have announced several new routes, with easyJet to launch 15 new routes as part of its Winter Schedule 2009/10 and Ryanair announcing plans to open its 33rd base and first base in Portugal at Porto, with two based aircraft and four new routes. Ryanair expects to increase traffic at Porto to an estimated 1.5 million passengers. 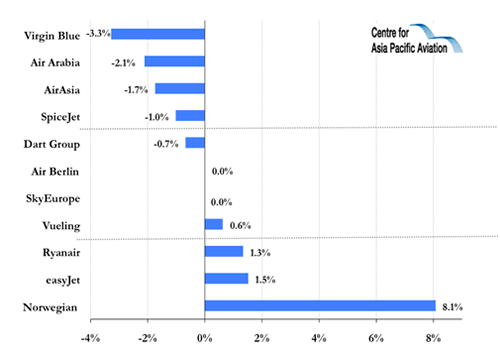