Flight operations to, from and within Europe are gradually being restored due to a combination of better fortune on the eruption/weather front and an increasingly pragmatic approach by regulators and manufacturers, while maintaining safety as the overriding priority. The UK Civil Aviation Authority (CAA), in conjunction with the Irish Aviation Authority (IAA) has issued new guidance on the use of airspace, covering the Anglo Irish Functional Airspace Block (FAB).

The new guidance allowed a phased reintroduction from 22:00 last night of much of the airspace that was closed due to the volcanic ash plume over the UK. There will continue to be some ‘no fly zones’ where concentrations of ash are “at levels unsafe for flights to take place”, but the CAA noted these are “very much smaller than the present restrictions”.

The CAA stated the way forward is based on international data and evidence from previous volcanic ash incidents, new data collected from test flights and additional analysis from manufacturers over the past few days, adding “it is a conservative model allowing a significant buffer on top of the level the experts feel may pose a risk”.

The CAA issued the following statement:

“The CAA has drawn together many of the world’s top aviation engineers and experts to find a way to tackle this immense challenge, unknown in the UK and Europe in living memory. Current international procedures recommend avoiding volcano ash at all times. In this case owing to the magnitude of the ash cloud, its position over Europe and the static weather conditions most of the EU airspace had to close and aircraft could not be physically routed around the problem area as there was no space to do so. We had to ensure, in a situation without precedent, that decisions made were based on a thorough gathering of data and analysis by experts. This evidence based approach helped to validate a new standard that is now being adopted across Europe.

Engine manufacturers and other suppliers to avoid liability?

Establishing who is liable for the hordes of compensation claims which will inevitably arise is going to be a goldmine for lawyers.

There are for example reports aero engine manufacturers have threatened they will withdraw warranties if airlines fly through an 'ash cloud'. This would put the onus on governments to underwrite the cost.

In addition, the CAA’s Revised Airspace Guidance requires airlines to:

As every announcement is being made, the respective legal teams will be carefully vetting their own organisation’s legal position.

Given the inherent risk-averse nature of legal advice, these uncertainty factors could continue to cause service disruption, as airlines, manufacturers, governments and quasi-government bodies review their positions with their insurers.

In response to the CAA notice, British air navigation services provider, NATS, noted that most restrictions on UK airspace began to be lifted last night, with air traffic control services resuming in the UK, with the exception of an area over the north west of Scotland which continues to be affected by a dense concentration of volcanic ash.

But NATS warned the situation continues to be dynamic as a result of changing weather conditions and the prediction of dense areas of volcanic ash.

EUROCONTROL stated roughly 13,000 flights took place yesterday in Europe, still well down on normal levels for a Tuesday of around 28,000. EUROCONTROL advises that all European airspace is available, with the exception of Finland which is closed at all levels.

Air traffic control services are not being provided to civil aircraft in significant parts of the lower airspace primarily in north-western Europe, including Denmark, Estonia, Ireland, Latvia, Sweden and the UK.

Air traffic control services are being provided albeit with very significant restrictions on the number of flights authorised, and/or the routes and flight procedures to be followed, in several parts of the lower airspace in north-western Europe, including Germany and northern France.

The graphic below, provided by Sabre Flight Explorer, displays real-time flight paths and the different routes that airlines are currently taking to avoid the ash plume. The image was taken at 18.00 UTC on 20-Apr-2010. 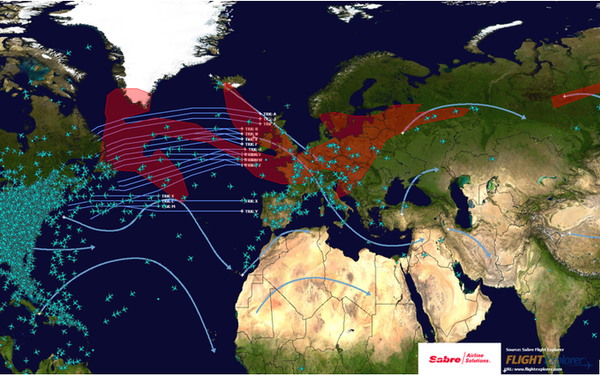 European airline, airport and supplier stocks bounced back yesterday, suggesting investors believe they were oversold on Friday and Monday, but uncertainty remains. LCC Norwegian (+5.4%), led the way yesterday, while nordic rival SAS was 4.2% higher. Spanish LCC, Vueling, advanced 3.4%, while Air France-KLM, British Airways and Lufthansa all reversed losses from the day before, rising 0.7%, 1.0% and 1.8%, respectively. 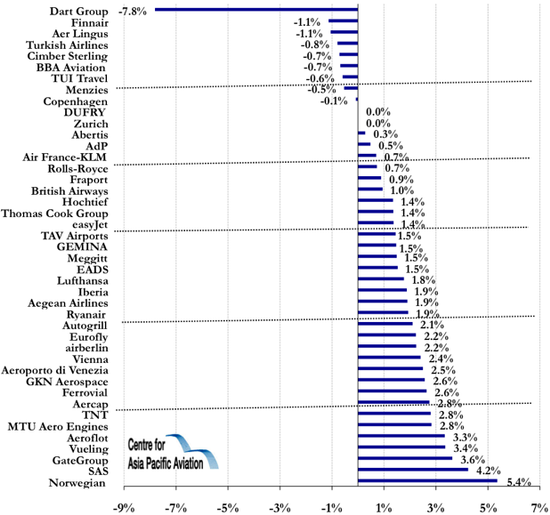