Dutch carrier Arkefly is expanding its network to the US west coast with three new seasonal destinations, signalling the potential it sees in the relatively undeveloped low-cost long-haul trans-Atlantic market. Until now Arkefly’s US network was limited to the east coast. The airline is also planning expansion to Southeast Asia which could fill some of the void left by AirAsia X in the Europe-Asia low-cost long-haul market.

Arkefly is a low-cost carrier based at Amsterdam Schiphol Airport and is owned by Germany’s TUI Group, which has a portfolio of airlines following primarily leisure carrier or hybrid leisure/LCC models. Arkefly operates a mix of scheduled and charter services with both narrowbody and widebody aircraft. Its charters are primarily for Dutch tour operator and sister company Arke, which is also owned by TUI. Other TUI Group carriers include TUIfly (Germany and Austria), TUIfly Nordic (Sweden), Thomson Airways (UK), Corsairfly (France) and Jetairfly (Belgium).

Arkefly currently operates to North America, the Caribbean, Europe, the UAE and India. As part of its summer 2012 schedule, its services will be expanded in Europe, North America and the Caribbean while its network will also be extended to South Asia and Africa. 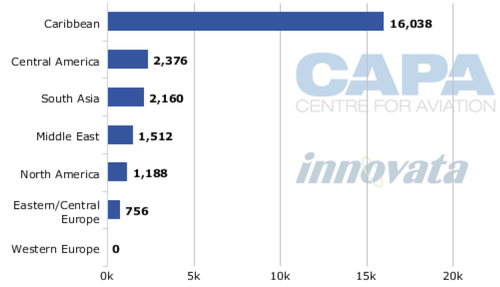 Arkefly’s operations are very seasonal with its volume of operations and expanse of network varying greatly between its winter schedule and busier summer schedule, when leisure travellers are most active in Europe. Currently 66.7% of the carrier’s capacity is allocated to Caribbean routes, but as the summer schedule kicks in from the end of Mar-2012, the distributions will change as will the capacity it offers.

Arkefly is also planning new seasonal services to the West Coast of the US, an interesting development as previously it only served the East Coast. Over Jun-2012 to Sep-2012 the carrier plans to serve Las Vegas, Los Angeles and Oakland. These cities will be served via three new routes, each of which will be operated with one weekly frequency: Amsterdam-Las Vegas-Los Angeles-Amsterdam; Amsterdam-Las Vegas-Oakland-Amsterdam; and Amsterdam-Oakland-Los Angeles-Amsterdam.

Arkefly will be the only carrier operating non-stop flights from Amsterdam to Las Vegas. But in the Los Angeles and Oakland markets, it will compete against KLM. According to Innovata, KLM now operates daily service to Los Angeles and five weekly services to San Francisco, which is located just across the San Francisco Bay from Oakland.

Arkefly’s new US destinations bring its total US network to five destinations following the East Coast destinations of Miami and Orlando Sanford. KLM now serves Miami but there are no other carriers linking either Orlando area airport with Amsterdam.

Arkefly has faced significantly less direct competition since Nov-2011, when Martinair ceased all passenger services and handed all passenger services to parent company KLM. But hybrid carrier airberlin has been steadily expanding its North American and Caribbean networks from its Berlin Tegel base. New airberlin low-cost long-haul services to Las Vegas and Los Angeles are to commence from 01-May-2012 and 10-May-2012, respectively.

With AirAsia X’s withdrawal from Europe to be completed over the next month, Arkefly and airberlin will also be left as the only low-cost long-haul carriers between Europe and Asia.

In addition to its current services to India, Arkefly plans to move into Southeast Asia with Bangkok Suvarnabhumi and Phuket services beginning on 27-Jun-2012.

airberlin now offers services to Bangkok from Berlin and Düsseldorf and to Phuket from Berlin and Munich. But its Bangkok services are to be cancelled from late Mar-2012 so it can focus on North American routes, as part of a network alignment with key shareholder Etihad.

Arkefly now operates an all-Boeing fleet consisting of five 737-800s and five 767-300ERs. The carrier is set to receive one more of each type in the near future and intends to continue gradually expanding its 737 fleet. The airline also has three 787-8 aircraft on order which it expects to receive from 2014. While they will initially serve as replacements for its oldest 767-300ER aircraft, Arkefly is reportedly looking to receive more 787s.

Fast-expanding LCC Norwegian Air Shuttle is also planning to operate 787 aircraft on long-haul services. The airline has six 787-8s on order, the first of which it plans to receive in 1Q2013. While initially Norwegian highlighted New York as a possible launch destination, it has also stated it is considering Beijing, Hong Kong and Bangkok as potential destinations.

Norwegian Air Shuttle and airBerlin’s plans are not likely to have a large direct impact on Arkefly considering Arkefly is primarily a charter operator compared with Norwegian and airberlin, which focus only on scheduled services. While Arkefly does offer scheduled services, its core operation is as a service provider to Arke and the TUI travel group. As a result, it is shielded for the most part from competition from other LCCs as well as full service carriers.

With the summer schedule close to coming into effect, Arkefly will see its operations expand considerably from winter 2011/12 levels. Depending upon the uptake of its new services to the US and Southeast Asia, there could be further expansion of Arkefly’s low-cost long-haul network in winter 2012/13 and summer 2013.