Arik Air, Western Africa’s largest carrier, looks set to start delivering on some of its often repeated long-haul growth plans with the arrival the first of four A330-200s, with the second due by the end of Jul-2013.

The new aircraft are aimed at increasing frequencies on some existing services, including Lagos to New York, while also opening new routes with Sao Paulo high on the list. Arik states that other opportunities include China, United Arab Emirates and more points in Europe and the United States.

In addition Arik has placed firm orders for Bombardier CRJ1000 NextGen regional jets and Q400 NextGen turboprops as the carrier looks to expand its regional network beyond Western Africa.

But the carrier, which is heavily indebted to the government, also faces the prospect of another new national carrier being launched by the end of 2014 to provide domestic, regional and intercontinental competition.

Arik deploys its first A330 on Lagos-London Heathrow

The first A330-200 arrived on 09-Jul-2013 and has been deployed on the daily Lagos–London Heathrow route, replacing an A340-500. Arik competes with British Airways and Virgin Atlantic on the highly lucrative route, serving the large Nigerian population in Britain and significant leisure and business traffic. But Arik’s gauge change results in it offering 140 fewer one-way seats per week on its only European route. British Airways also operates from London Heathrow to Abuja giving it a total market share of about 50% between the two countries.

The five-year old A330-200 was previously operated by Portuguese aircraft leasing company Hi Fly which also owns both of Arik’s A340-500s. As a result of their common ownership, both aircraft types are fitted with the same on-board product.

Arik has in turn redeployed the A340-500 with a two-class, 237-seat configuration to operate Lagos-Johannesburg Oliver R Tambo International, replacing a 737-800 which offers 148 seats in two classes.

Arik’s decision to up-gauge on the Lagos-Johannesburg route will increase competition with South African Airways which operates daily with a mix of two-class 253-seat A340-300 and 317-seat A340-600 equipment as the only other carrier on the route. 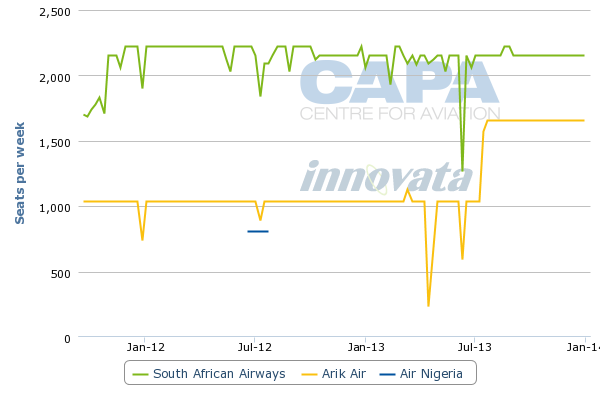 An order for eight 737-800 is slated for delivery between 2013 and 2015 which will be used for continental network expansion. 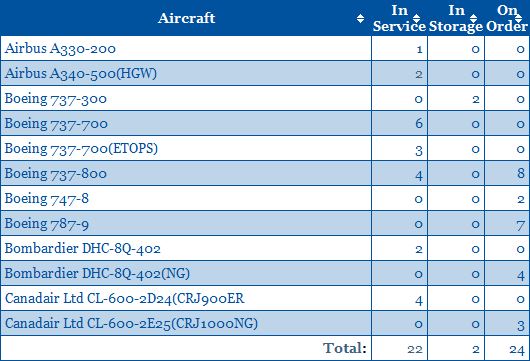 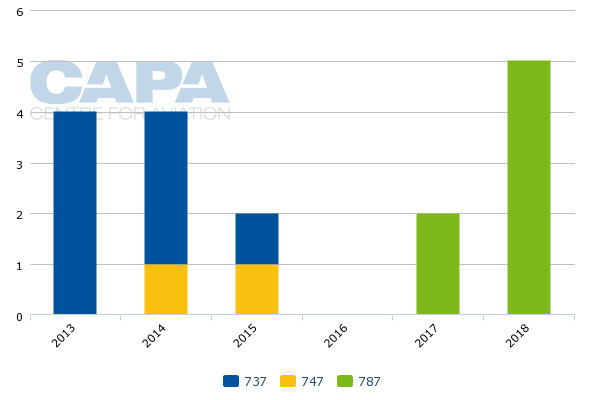 Source: CAPA Fleet Database
* Excludes new aircraft that are coming from leasing companies Aircraft operated by subsidiaries/associates of the main carrier may be listed separately

Arik has also signed a firm contract to acquire three Bombardier CRJ1000 NextGen and four Q400 NextGen aircraft. No delivery date has been specified, but if the order is filled, Arik could become the first African operator of the 100-seat CRJ1000 NextGen.

The carrier currently operates four 75-seat CRJ900ERs in two classes and two 72-seat Q400s also in two classes. It is not clear if the new aircraft are incremental or replacement for the older and less efficient models of each type. 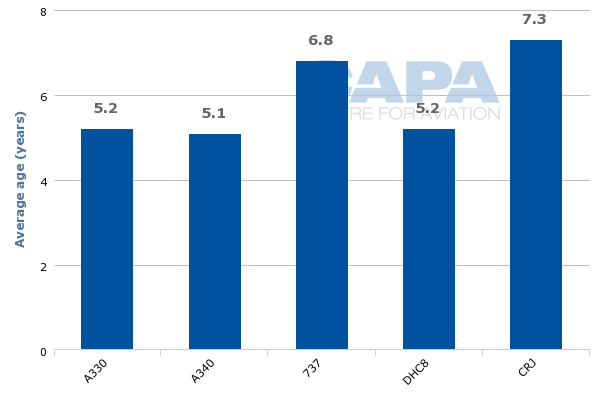 The incoming A330-200 fleet will allow Arik Air to increase its Lagos-New York services from three times weekly to daily from Oct-2013. The airline is yet to schedule the A330 for the route or any frequency increase, according to Innovata. But a daily service will add about 810 one-way seats per week, taking the total to about 1,520, according to Arik’s seating figures.

In contrast, Arik’s two United States competitors, United Airlines and Delta, have both been reducing capacity on their services to Lagos.

Delta Air Lines serves Lagos daily from Atlanta with a 767-300, but it too has reduced capacity since the start of 2012, from about 1,700 one-way weekly seats to about 1,540 seats per week. Delta pulled off the Accra-Abuja route in Jul-2012, which was an extension of its New York-Accra service which it maintains.

Arik plans to use its expanded fleet of 737-800s to open routes to Egypt and other North African destinations in 2014. That will be followed by expansion to East Africa and additional frequencies to South Africa.

Nigeria currently has air links to Egypt and Morocco, with EgyptAir operating daily from Cairo to Lagos, offering about 2,500 one-way seats using a 737-800 on the near six hour flight. Royal Air Maroc (RAM) flies daily from Casablanca to Lagos via Cotonou, Benin with a mix of 737-700 and -800s.

Arik has remained primarily a Western African regional carrier, operating from hubs at Lagos and Abuja since launching in 2006 after taking over the assets of bankrupt national carrier Nigeria Airways. The majority of its operations are dedicated to domestic operations where it competes mainly with Aero.

The heavily indebted carrier reportedly secured a USD2 billion credit facility in Oct-2012 to fund the acquisition of additional aircraft, but repeated announcements of new long-haul routes have not come to fruition in recent years.

Arik, along with Aero, are apparently barred by the Central Bank of Nigeria from receiving further loans from Nigerian banks due to outstanding debts relating to support funding received in 2010 as part of a USD3.3 billion bailout for the country’s domestic carriers. The purpose of that injection was to enable the carriers to refinance their loans for 10 to 15 years.

See related report: Arik Air has the funding and opportunity to grow in 2013, but faces further government interference

Arik reportedly in May-2013 applied to Brazil’s National Civil Aviation Agency for traffic rights and slot allocation. At the time the carrier was reportedly aiming for a possible launch of services within three months.

Sao Paulo Guarulhos International Airport operator Invepar stated on 07-Jul-2013 that Arik was one of three African carriers, including Air Algerie and Royal Air Maroc, that were “studying which routes are profitable” from their respective markets.

Brazil is becoming an increasingly attractive target for African carriers, keen to exploit their geographic advantage of linking the world’s three high growth regions of South America, Africa and Asia.

Ethiopian became the first African carrier to link South America with Asia when it launched three times weekly 787-8 services from Addis Ababa to Rio de Janeiro and Sao Paulo via Lome in Jul-2013.

Ethiopian wants to tap into the considerable transfer traffic along the full length of the South American-Asia route using an efficient connecting time to Guangzhou over Addis Ababa. Traffic on the route has traditionally transferred via hubs in North America and Europe, but these are coming under increasing pressure from the Middle Eastern hub carriers.

The ease of transfer relative to complex visa and security issues involved in transitting the US, as well as the availability of new long-haul aircraft on the westbound route from China is creating openings for airlines from Turkish Airlines, the Gulf carriers and those African airlines that have suitable long-haul equipment.

Arik could establish an inter-continental link over Lagos if it is able to develop services to points in Brazil and China, as well as leveraging Nigeria’s oil rich economy by bringing more investment to the most populous nation on the continent.

Arik also points to Tel Aviv as a potential new route once a bilateral air services agreement between Nigeria and Israel is concluded.

Arik has reportedly been in talks with the Sierra Leone Government to provide technical support to establish a new national carrier to be named Leone Airways. The airline was reportedly scheduled to commence domestic, regional and intercontinental services, including Freetown to London, in Jun-2013, operated by Arik. But, as is so often the case in Africa, the enthusiasm has not been met with results, and there has been no further update on progress.

British Airways currently operates London Heathrow to Freetown three times weekly with a 767 as part of its London-Freetown-Monrovia service.

Arik has held similar discussions with Air Cote d’Ivoire to launch a domestic network in that country.

The lack of strong regional carriers in Western Africa has attracted a number of airlines from Eastern Africa to try and win a slice of the potentially lucrative market, either in their own right, such as Kenya Airways and RwandAir or, in the case of Ethiopian, by establishing Asky as a local subsidiary.

Nigeria One's launch is delayed (at least) until end 2014

Ironically, Arik’s more immediate threat could come from closer to home. The Nigerian Government is determined to dabble again in the aviation industry by launching a new national carrier to replace Nigerian Airways, which failed amid controversy in 2003.

Another good example of the erratic policy approaches followed by the government, talk of a new government-backed airline also presumably derives from a continuing frustration with the inability of the private sector to establish viable local operations.

Yet, unless a more enlightened strategy is devised to replace the current wavering between protectionism and unstructured emergency funds injections, there is little hope of a positive outcome in the near future. If the Nigerian Government does in fact want to develop a sound aviation system, there is a lot more to it than mere rhetoric and occasional bursts of activity accompanied by large international loans for airport construction.

A reported prospective loan of USD500 million from the Chinese Government to construct an "Aerotropolis" and MRO facilities may or may not be a valuable injection of funds – but it will be water into the sand unless there is a coherent aviation strategy to back it up.

Meanwhile, Nigeria's Ministry of Aviation reportedly stated on 09-Jul-2013 that Nigeria One is awaiting Federal Government approval and is seeking core investors and technical partners.

Reports had surfaced in Jun-2013 that the new flag carrier would be launched by the end of 2013 through the amalgamation of the assets of existing domestic carriers that were heavily indebted to the Assets Management Corporation of Nigeria, including Arik and Aero.

A month later this approach appears to have been dropped, with reports on 12-Jul-2013 that the launch of Nigeria One has been delayed by a year and will instead be funded through a public private partnership (PPP) arrangement with the Nigerian Government taking no more than a 25% stake and the remainder held by an international carrier, possibly from the Middle East and a wealthy foreign investor – a proposal more hopeful than real that, if correct, overlooks issues of national ownership and control that would substantially restrict the carrier's ability to operate internationally.

Nigeria's Minister of Aviation Stella Oduah reportedly said the government expects the proposed national carrier – which will supposedly launch with 50 new aircraft – to contribute USD10 billion to the country's GDP by 2026 and help increase passenger numbers to more than 25 million by 2018 and 30 million by 2032. There is little in Nigeria's aviation history to encourage the prospect that any of those back-of-the-envelope numbers will be achieved.

Nigeria is long overdue for a coherent approach to aviation strategy

Federal Airports Authority of Nigeria managing director George Uriese suggested in Jul-2013: "With a population of over 167 million people and a projected passenger growth of 50 million by 2026, Nigeria is a huge, untapped market waiting to be harnessed by investors with an eye for guaranteed return on investment". That is certainly how it should be. A country of 167 million people with enormous untapped mineral wealth deserves a lot better deal than it gets from its aviation system at present.

Nigeria should be the aviation powerhouse of the sub-region. Instead it is stumbling from one misconceived policy to the next. Protectionist overtones are complemented by a constant hope for a silver bullet to produce something to protect.

For Arik, the acquisition of additional long-haul aircraft indicates it is beginning to deliver on its long promised expansion programme. But with an unenviable reputation for service and the prospect of a state-sponsored competitor on the horizon, Arik may have little more than a year to implement a fleet and network diversification strategy ahead of what could be the start of another turbulent period in Nigerian aviation. This is not a framework for the future; whatever infrastructure is built, the real need is to lay the foundations for a realistic progression towards a sustainable industry.