Are the foundations of Europe’s aviation sector really “crumbling”? AEA's "Summit" not the answer

The Association of European Airlines Secretary General Ulrich Schulte-Strathaus announced last week that the “foundations for a sustainable European air transport sector are crumbling”. ACI EUROPE has already forecast a hole of 105 million passengers in 2009, and the evaporation of three years of passenger growth.

Clearly, European aviation is suffering. IATA expects European airlines to lose USD3.8 billion in 2009, and a further 1.9 billion in 2010. However, is Secretary General Ulrich Schulte-Strathaus’ statement really a reflection of the future of all Europe’s airlines, or just that of the full service carriers that the AEA represents?

The AEA reported that passenger numbers for its member airlines fell 4.5% in Sep-2009 while traffic (RPKs) have declined 3.4%. Capacity (ASKs) was down 5%, although average passenger load factors were 1.4 percentage points better than Sep-2008. 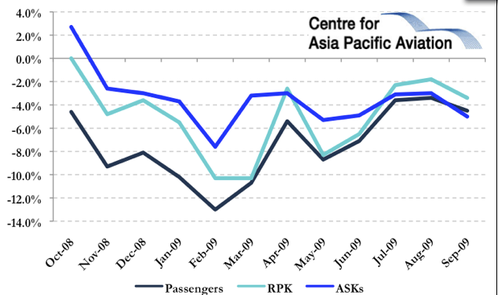 The strongest falls have been recorded in domestic traffic, trans-Atlantic markets and long-haul operations to the Asia Pacific.

The Sep-2009 figures show “no sign of improvement” according to the AEA, as they are coming off the “depressed baseline” of the “dismal” 2008 figures. Passenger traffic levels are now consistently 2 percentage points below traffic from last year. 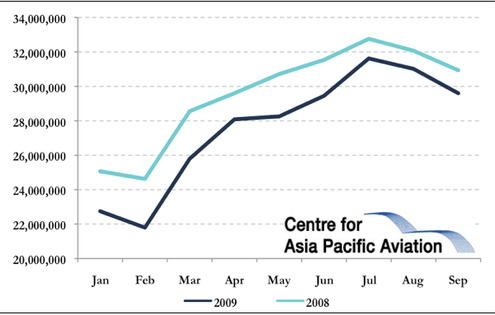 Yields are even worse, with the AEA reporting that the average ticket price per RPK has fallen by more than 15%.

An industry “close to collapse”?

The results have caused Secretary General Schulte-Strathaus to issue a warning that “portions of our industry are close to collapse”, with failures seen in all commercial aviation segments: full service airlines, leisure carriers, “no frills” carriers and cargo airlines.

However, Europe’s situation is now proving an exception to the broader general recovery in aviation. The latest traffic figures released by IATA suggest that the region’s recovery is lagging behind all other regions except Africa and mild noises of recovery in premium travel are being experienced in Asia, the Middle East and other parts of the world - although any recovery, if that is what it is, is still fragile and uncertain.

According to IATA’s figures, European international traffic performance was better than or equal to the industry average for most of the downturn. Since the end of the Northern Summer however, the region’s performance has not followed the rest of the industry worldwide, and has turned back down markedly.

In Sep-2009, IATAs figures show international traffic, measured in RPKs declined by 4.2% year-on-year in Europe. Capacity was down 5.4%. Load factors are above international averages at 79.5%. IATA’s figures do not present a full picture of European operations, as they do not include domestic figures, which accounts for approximately a quarter of all traffic operated by AEA carriers.

The interpretation of RPK data also can be misleading, as several European airlines have significantly reduced their average stage lengths over the past year. 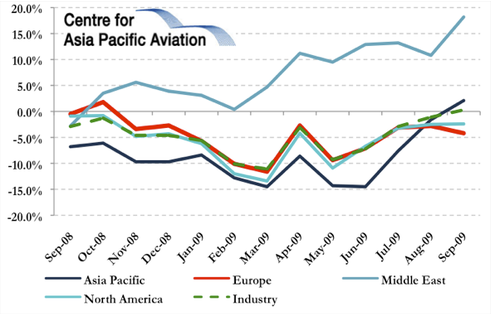 The situation for AEA carriers is admittedly severe, but it is as much a product of the general downturn in the economy and airline traffic as it is of any structural shift in European aviation, particularly in short-haul markets, away from full service airlines.

LCCs now account for more than 35% of travel within Europe, both cross-border and domestic. Even with their short haul focus, the LCC segment accounts for just under 12% of international traffic to/from the EU.

LCCs in Europe have suffered from yield dilution just as much as their full service counterparts, but have not responded with a similar level of capacity reduction. According to European air traffic control body, EUROCONTROL, LCC aircraft movements declined 2.2% in Sep-2009, but there is “no sign of recovery” for traditional airlines. 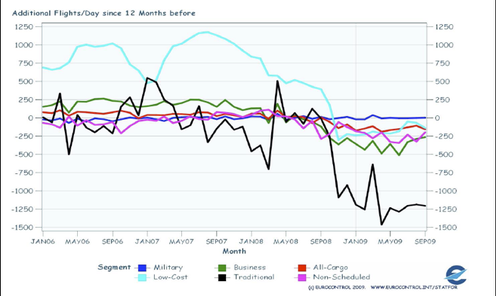 Two of the region’s largest LCCs, easyJet and Ryanair, have maintained passenger and capacity growth almost without pause throughout 2009. 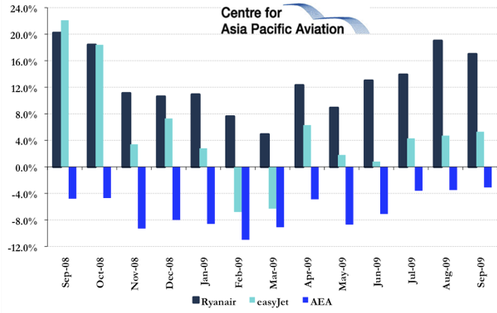 To rebuild the crumbling foundation of aviation and bring Europe’s full service carriers back from the brink, the AEA has called on European policy-makers to convene a ‘stakeholder summit’ to address the challenges facing the sector “during the longest and deepest business downturn in its history”.

The AEA has cast a covetous eye on the US move to set-up a Federal Advisory Committee to discuss the future of the industry, the US having already hosted a stakeholder forum, to ensure that policy-makers “take proactive steps to construct a regulatory framework within which a return to prosperity could be expedited”. According to the AEA the US is a step ahead of us in “grasping the severity of the crisis”.

This somewhat ambiguous call for a "summit" would necessarily (presumably) include all airlines and interested airports. It would ideally also embrace consumer stakeholders, a thought which would make the whole event wholly unwieldy. But the alternative, of a closed meeting involving AEA members and a select group of governments and other stakeholders would run the risk merely of distorting the commercial realities of a soft market and of an evolving industry.

If the AEA's goal is to reinforce the role of large network flag carriers - and, on many levels there are arguably solid social and economic reasons for doing this - then the summit's agenda is a much larger one than apparently envisaged. A patchwork, patched-up temporary support structure would however not achieve any valuable economic goals. If the recent moratorium on "use-it-or-lose-it" slot access at major airports is any indication of the type of patch-up solution being sought, then it is hard to argue that any but some very narrow, and questionably useful, objectives would be achieved.