In Canada, despite only a 50:50 survival rating from a Raymond James analyst, Air Canada moved pretty much with the market, losing a relatively modest 2.5%. According to the analyst, Ben Cherniavsky, "(a) broken business model and inflated balance sheet caused the airline to go bankrupt in 2003...Today's immediate threats are more directly and immediately related to the global credit crunch and the impact it has had on Air Canada's cash flow... The possibility of Air Canada getting through this current predicament is about 50/50 at best."

As the Dow (-3.3%) headed south for the second day in a row after the massive bull run over the past two weeks, and analysts argued about whether this was merely profit taking, US airline investors had no such doubts: it was time to unload.

United had already lost 7.0% on Friday, and the others were also down to varying degrees. Only the unique and quirky Allegiant model, with its antiquated (but very cheap) fleet, appears to be seen as rust-proof in this salty climate. Southwest (-1.9%) is also more favoured.

This fall by the US majors came despite lower oil prices and may be cause for some discomfort, if in fact the recent bull run has been merely a phantom. Although these majors moved upwards a little on the tide, yesterday's significant downward moves suggest they are still regarded as being very fragile. 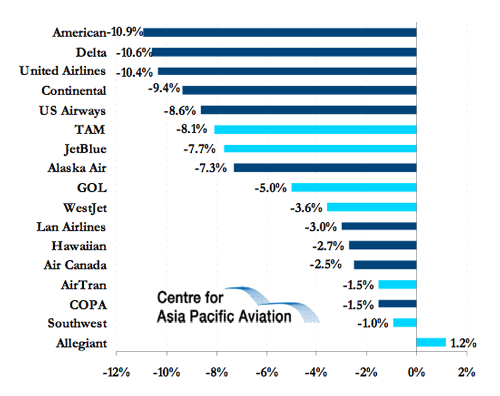