American and US Airways are pressing full steam ahead to close their merger by 3Q2012, including stressing to US legislators that the combination will improve the overall health of the country’s airline industry and make the merged airline a more viable competitor with legacy and low-cost carriers alike. With just a dozen routes that overlap, the carriers should not encounter any resistance from anti-trust authorities, and given that most the markets are hub to hub pairings, few changes are likely to be made to service patterns once the 18 month integration process is complete.

Some of the arguments made by American and US Airways over increasing competition from low-cost carriers and their potential service expansion into overlap markets might be overblown as those airlines in previous mergers have been selective in grabbing the low hanging fruit created by the tie-ups between Delta-Northwest, United-Continental and Southwest-AirTran.

Overlap on a dozen routes

Executives at American and US Airways have declared that presently the two carriers compete on 12 non-stop airport-to-airport routes compared with 11 at Delta and Northwest at the time of their merger in 2008, 13 between United and Continental when those carriers unveiled their tie-up in 2010 and 23 at Southwest and AirTran at the close of their merger in 2011. Those 12 routes are largely services operated between US Airways’ hubs in Charlotte, Phoenix and Philadelphia and American’s hubs in Dallas/Fort Worth, Miami, Chicago and Los Angeles.

The largest route among the 12 is Phoenix to Los Angeles, where current schedules in Innovata (24-Feb-2013 to 02-Mar-2013) show roughly 20,603 one-way seats in the market operated by American, Delta, Southwest, United and US Airways. 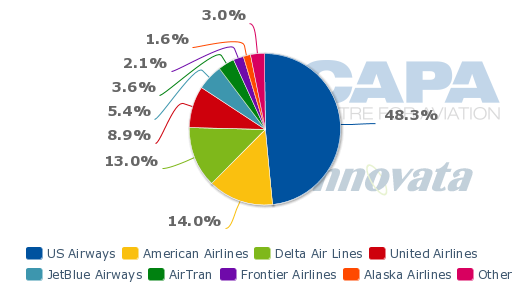 Spirit Airlines is scheduled to launch new service from Philadelphia to Dallas in Apr-2013, but with just a single daily flight the carrier’s entry will not dramatically alter the competitive landscape as its approximately 1,015 seats will only account for a roughly 9% share for the week of 14-Apr-2013 to 20-Apr-2013.

US Airways in testimony during a hearing in the US Congress on 26-Feb-2013 stated that the 2014 expiration of the Wright Amendment, (which limits flights with more than 56 seats from Dallas Love Field to within Texas and the four adjoining states of Arkansas, Louisiana, New Mexico and Oklahoma), will mean non-stop competition from other airlines “is already present or will soon be added on all airport pair overlaps”.

Love Field is Southwest’s headquarters and the carrier holds a roughly 98% seat share at the airport. While Southwest would likely consider launching service to some of the overlap cities from Dallas, it is not likely to make a large push into those markets. Phoenix is a likely possibility as is Chicago since those two markets are in the carrier’s top 10 airports based on daily departures. Service to Philadelphia might be plausible since Southwest serves the city from its top destinations of Midway, Denver, St Louis, Las Vegas, Houston and Phoenix. Southwest also operates flights from Philadelphia to Fort Lauderdale, Tampa, Orlando and Fort Myers and West Palm Beach, Florida, and Nashville, Tennessee. But once the Wright restrictions are lifted, Southwest’s top priority will likely be linking Dallas with its top cities of Chicago, Denver, Baltimore and Los Angeles. 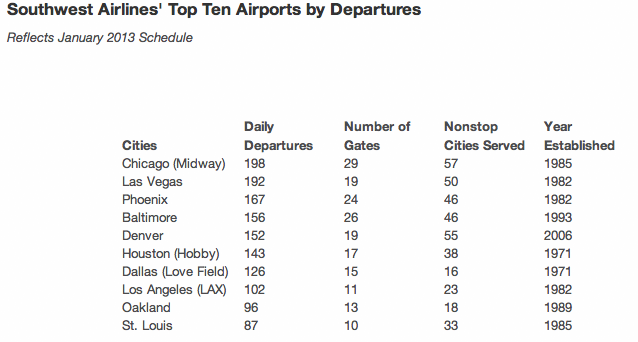 Southwest’s intentions in Charlotte are somewhat of an unknown, given the airport is 394km from AirTran’s Atlanta hub, which Southwest has stated it would de-hub as the integration moves forward. Service from Dallas to both Atlanta and Charlotte could be a distinct possibility once the restrictions from Love Field are lifted. But the notion that Southwest will come into a market with much lower fares is outdated as the carrier is suffering from cost creep woes that are also a challenge for its legacy competitor Delta.

The new reality is Southwest must set price points that cover its increasing costs of operations, which is reflected in data from the US Department of Transportation that show fares at Houston Hobby – where Southwest has long been the dominant carrier and currently accounts for 74% of the seats on offer – increased nearly 48% from 3Q2000 to 3Q2012. Hobby is just 38km from Houston Intercontinental, which is a large hub for United Airlines. The rise in fares at Hobby shows that low-cost carriers cannot always be relied upon to ensure that a low fare option will always be available as the US market moves forward to complete its final phase of major airline consolidation.

US Airways and American in Congressional testimony also stated that in addition to the “new” American competing against Delta and United, it would also face competition from a host of smaller low-cost carriers including JetBlue, Spirit, Alaska, Frontier, Allegiant and Virgin America. While the larger carriers in that grouping, JetBlue and Alaska, along with Southwest, do exert some competitive pressure in the US marketplace, the likelihood those airlines will make a push into the overlap markets of American and US Airways is small.

The greater likelihood is that some of the smaller low-cost carriers will fill in the gaps that will inevitably be created when American and US Airways rationalise their combined network and cut unviable smaller routes. Both Allegiant and Frontier have done that in Orlando by opting to enter markets that AirTran was exiting.

Aside from Spirit Airlines, which has unleashed competition with American during the last couple of years from Dallas/Fort Worth, it is unlikely the larger low fare carriers will enter the overlapping markets of American and US Airways. The smaller carriers – Frontier, Virgin America and Allegiant have their own strategies in the US marketplace going forward. Frontier is dodging direct competition with Southwest out of its Denver hub while trialling secondary airports such as Trenton, New Jersey. Virgin America is continuing its quest to achieve profitability while Allegiant in the continental US has no plans to deviate from its strategy of serving large leisure markets including Las Vegas and Orlando from smaller cities.

While US Airways and American argue that the continued growth of LCCs will ensure that air travel in the US will remain competitive, the reality is there will be little change in the overlapping markets of American and US Airways. United will likely keep its seat share stable in the three of 12 overlapping markets featured in the combined American-US Airways network, and low-cost carriers will find little compelling reason to challenge the combined carrier on its hub-to-hub pairings as the combined carrier will have the scale to lower fares temporarily to drive competition from its fortresses. Spirit may see some opportunity as it chases low-yielding travellers that the legacy carriers are opting to ignore, but essentially the 12 overlapping markets should remain status quo, with the possibility of increased fares once the combined American and US Airways leverage their new pricing strength on hub-to-hub routes.