The decision by American Airlines and GOL to deepen their partnership is hardly surprising, and more of an evolution of their relationship as the chess pieces in Latin America are placed in position.

After being caught off guard when Delta forged a relationship with LATAM Airlines Group in 2019, American is now solidifying its position in Latin America, and is willing to pay to maintain its strength in the region – evidenced by its decision to invest in both GOL and the ultra-low cost carrier JetSMART.

The move reflects American’s recent decisions to forge what could be deemed unconventional partnerships, which in part have resulted from a certain level of necessity.

But this could also be a scenario where, ultimately, necessity is indeed the mother of invention.

After Delta decided to invest and build a joint venture with LATAM Airlines Group, American lost its major partner in Latin America and opted to forge a codeshare agreement with GOL.

Now American and GOL are deepening that relationship through an exclusive three-year codeshare and American’s USD200 million investment in GOL. American also has the right to appoint a member to GOL’s board of directors.

Neither American nor United has been as aggressive as Delta in taking stakes in airline partners. Though, in hindsight, those two airlines could be credited for taking a different approach as two airlines in which Delta has an equity stake – Aeromexico, LATAM – are restructuring through bankruptcy protection. Delta also has a 49% stake in Virgin Atlantic, which has also undergone a restructuring.

Before the airline announced plans to take a minority stake in JetSMART, American’s only other equity investment was a 2.76% stake in China Southern Airlines to bolster its position in Asia, a region where American has historically had a smaller footprint than United or Delta.

The fact that American is investing in both GOL and JetSMART at a time when Latin America’s recovery from the COVID-19 pandemic is expected to lag other regions of the world reflects the importance of Latin America to American.

The airline has stressed that it carried 14 million passengers between the US and Brazil during the past 10 years, which the company said represents more than twice as much traffic as the next largest US airline.

And even as American is not yet operating a normal schedule to Latin America, the Caribbean, Central and upper South America still represent 65.5% of the airline’s departing frequencies.

American Airlines Group: departing frequencies by region, as of mid-Sep-2021 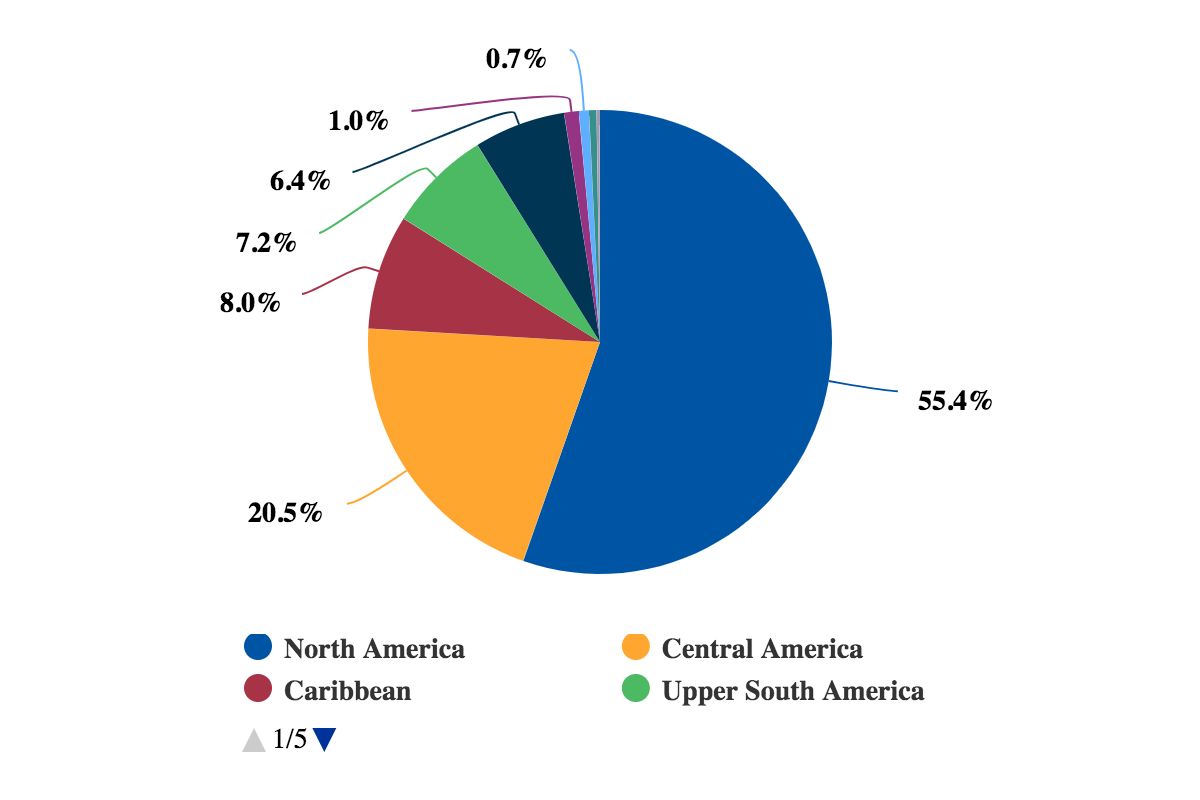 At a recent investor conference American’s management stated that approximately 65% of its customers in Mexico, the Caribbean and Latin America are residents of those regions.

But American believes more opportunities exist within South America. Its executives remarked that one area of opportunity for the airline is offering short haul and domestic connectivity in a lot of markets within South America. American’s management explained that the airline was looking to create partnerships that enable it to reach those markets and further the reach of the company’s loyalty programme.

Through its partnerships with JetSMART and GOL American can broaden its access to those short haul markets, which will recover faster than long haul international routes.

The moves by American also show that low cost and ultra-low cost airlines, which are continuing to proliferate in Latin America, will expand their roles through mutual beneficial partnerships.

The deepened relationship with GOL also reflects American’s 'outside the box' strategy of partnering with airlines in areas where it sees gaps in its network.

Domestically, American has forged partnerships with Alaska Air Group and JetBlue to strengthen its offerings on the US West and East Coasts. The airline has said that no other airline is adding flights back into the New York area faster than American and its new partner JetBlue.

“For years, American had a declining share of originating New York and Boston customers”, said company chief revenue officer Vasu Raja. “And now we're seeing that start to arc, especially as we look out into Q4 [4Q2021] and people are starting to fly back bigger schedules.”

Mr Raja explained that more American passengers are travelling on JetBlue’s transcontinental flights, and American’s flights to Tel Aviv and Athens are “increasingly filled [with] people booking through jetblue.com."

But Mr Raja noted that American’s service from Seattle to London was “out and running, and increasingly getting better as the partnership grows and expands, and we're seeing more connectivity come from the Alaska network and frequent flyer program”.

American is pleased with the Alaska partnership in Seattle, and “surprisingly, very pleased with it in Los Angeles, where suddenly, we're seeing a lot of connectivity and originating Los Angeles customers that we haven't seen really in years”, said Mr Raja.

During the past couple of years American has taken steps to fill in network gaps by partnering with value airlines such as Alaska Airlines and JetBlue and the lower cost operators GOL and JetSMART as dynamics in Latin America have shifted.

In some ways, as dynamics continue to shift during and after the COVID-19 pandemic, those partnerships could be a blueprint for the changing landscape.

And in the short term, those tie-ups will be watched closely to determine if airlines with business models can forge successful and profitable relationships.