The majority of North and South American carriers’ stocks were up on Wednesday (31-Mar-2010), despite another rise in oil prices (+1.9%), to USD83.76, and falls in the wider market. The Dow (-0.5%) dropped following data showing an unexpected decline in private sector jobs in Mar-2010, with US companies cutting 23,000 jobs, compared to an expected increase of 40,000 jobs. However, airline shares were pushed higher by impressive financial results from TAM.

American Airlines (+1.9%) and JetBlue Airways (+1.5%) were both up after signing an agreement to collaborate at key East Coast gateways, under which American intends to transfer eight slot pairs at Ronald Reagan Washington National Airport and one slot pair at Westchester County Airport to JetBlue. JetBlue in turn intends to transfer 12 slot pairs at New York JFK International Airport to American. The agreement will provide customers with interline service in non-overlapping markets. The companies are also exploring other avenues for commercial cooperation and will focus on routes to/from JFK and Boston that extend and complement each others' networks. Certain portions of the cooperative agreement may be subject to regulatory review.

TAM (+7.0%) was meanwhile the day’s biggest gainer, after reporting a net profit of USD80.8 million for the three months ended 31-Dec-2009, compared to a loss of USD689.9 million in the previous corresponding period. However, operating profit for the period was down 55.2% year-on-year, to USD1,351 million.

For 2010, the carrier expects passenger traffic (RPKs) to rise 14-18% year-on-year on a 12% increase in capacity (ASKs), resulting in a load factor of 69%. The carrier will add 16 aircraft to its fleet, an increase from its previously forecast five aircraft additions, taking its total fleet to 148 by the end of 2010. The carrier stated it has financing for all aircraft scheduled for delivery in 2010. The carrier added that it expects domestic load factors to remain stable, at 66%, compared to 65.4% in 2009. 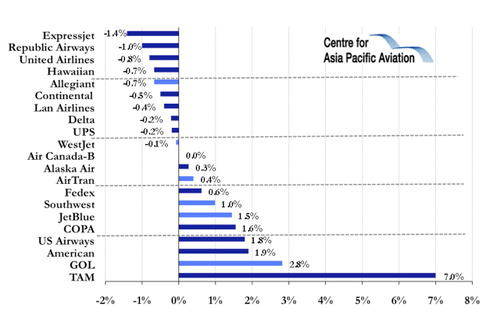