American Airlines (-3.7%) stated during trading it is "confident" that the total value proposition it, and its oneworld alliance partners, can offer Japan Airlines (JAL) is "superior in every way to any alternative". The carrier stated an offer to make up for lost revenue at best merely gets JAL back to status quo while introducing costly disruptions and distractions that would naturally follow a risky move to switch alliances amid a massive financial restructuring. American is also confident the two would be able to obtain antitrust immunity as early as the middle of next year, which would allow JAL to realize approximately USD100 million in revenue annually in future years.

American Airlines and TPG also reaffirmed their readiness to invest in JAL. The Nikkei has reported that American’s bid may consist of USD1 billion from TPG and USD300 million from the airline.

Meanwhile, Delta Air Lines (-1.8%) President, Edward Bastian, stated Delta and its SkyTeam alliance partners have prepared a USD1.02 billion offer aimed at attracting JAL away from American Airlines/oneworld, with the Nikkei English News adding that Delta may reportedly provide aid to JAL before the Enterprise Turnaround Initiative Corp of Japan decides to support the carrier’s reorganisation efforts. The funding proposal is reportedly as follows:

Hawaiian Airlines (-3.3%) also saw a drop in stock prices, despite stating it is starting to see an improvement in yields on its services to Australia, and plans to remain price competitive against Jetstar on the services. Avi Mannis, Vice President Revenue Management stated “we are fairly full for the next two months. In general business has picked up significantly and there are some signs that yields are coming up”.

Meanwhile, GOL (-1.7%) has increased fares for the first time in 12 months as the Brazilian economy starts to recover.

ExpressJet (+3.1%) continued to rise following its new deal with United Airways and stock upgrades over the past few days. 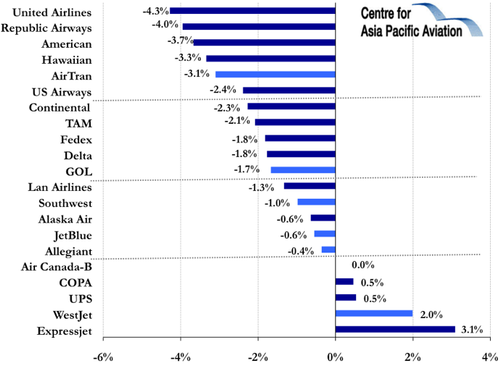