WestJet CEO, Sean Durfy, upon the release of the carrier’s Feb-2010 traffic results, commented that “while we are seeing signs of a slight, albeit slow, improvement in the demand environment, first quarter RASM is tracking to an anticipated decline of less than 3%”. He added, “we are encouraged by these positive indications and feel well positioned to capitalise on improving industry conditions."

Upon the release of the carrier FY2009 financial results last month, the carrier stated it expects RASM in 1Q2010 to decline by less than 5%, indicating an upward forecast as economic conditions improve. RASM declined less-than-expected in 4Q2009, sipping 10%.

Also during Feb-2010, the Canadian LCC transported an additional 68,000 passengers (although passenger numbers figures were not provided), as the carrier increased capacity (ASMs) by 9.3%. Load factors declined 0.1 ppts to 82.5%. The carrier anticipates a 7% increase in capacity in 1Q2010, following a 12.8% reduction in FY2009. WestJet's shares slipped 1.1% yesterday.

In Brazil, shares in GOL slipped 1.5% yesterday, despite its American depositary receipts being upgraded from “hold” to “buy” at Banco Santander SA, which commented that it was “bullish” on Latin American airlines given an economic recovery, a lower impact from the swine flu virus and “stable” jet fuel prices in coming years. 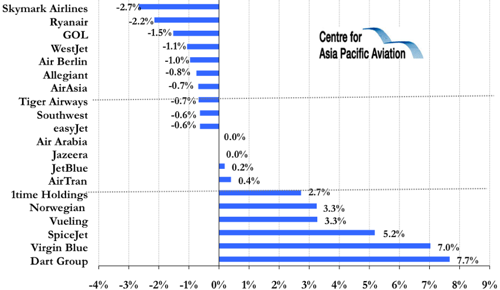