As the final stages of consolidation within the US market near completion, it would seem that Allegiant’s opportunities for growing its leisure-only customer base will continue to grow, evidenced by its expansion from Cincinnati, a Delta hub whose importance continues to diminish in the legacy airline’s network.

But even as Allegiant’s unique model continues to deliver solid returns, it faces challenges of rising costs driven by factors that could linger for the foreseeable future – salaries and maintenance.

Allegiant's annual growth in salary and benefits: CY2009 to CY2013 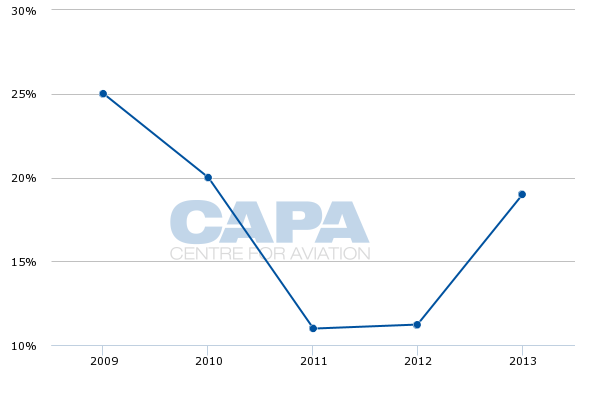 The airiine is in the midst of negotiations with pilots and flight attendants who are now represented by unions. Similar to Southwest Airlines, Allegiant faces the challenge of achieving cost-neutral labour contracts – agreements that entail some level of productivity gains in exchange for higher salaries. It is not an easy feat to achieve, and both carriers face significant hurdles in ensuring new contracts do not raise their labour costs.

The maintenance cost headwinds Allegiant faces during CY2014 should not reach the levels of CY2011 when an unusual number of scheduled aircraft engine checks on the airline’s MD80 jets resulted in a roughly USD20 million expense. On a per aircraft basis, Allegiant’s maintenance cost jumped from USD103 to nearly USD130 from CY2010 to CY2011.

Allegiant Air maintenance per aircraft per month: CY2009 to CY2014

For CY2014 Allegiant expects to complete 11 more heavy aircraft checks year-on-year, which will increase its maintenance expense per aircraft from USD96 to USD105. Allegiant’s fleet of 53 MD80 aircraft is projected to remain constant through YE2018. One of the airline’s early advantages of sourcing used MD80s was the low ownership cost of the aircraft.

But beginning in 2012 Allegiant began to scour the used market for Airbus narrowbodies as it looked to broaden its reach into near-international markets and look for more optimal aircraft to serve some of its higher utilisation routes.

By YE2014 Allegiant expects to operate four A319s and seven A320s, which should help improve the airline’s overall fuel burn given the fuel efficiency of the Airbus jets compared with the MD80s. Allegiant recently reached an agreement to obtain 12 A319s currently on lease to a European airline until 2018. It also plans to purchase an additional A319 and an A320 in 2015 and 2016, respectively.

Once all the Airbus additions are complete, Allegiant’s fleet of newer jets will reach 32 by YE2018 representing roughly 35% of the airline’s fleet. For the moment its fleet of 53 MD80s is projected to remain intact during the next four years. But if market conditions worsen, many of Allegiant’s MD80s are fully depreciated, allowing the airline to shed those less fuel efficient jets if necessary.

Benefits of Allegiant’s MD80s may be starting to wear thin

Even as Allegiant’s average fleet age is roughly 22 years, its total cost per passenger of USD116 remains competitive.

ULCC Spirit’s costs per passenger are lower, but most of its cost advantage lies within fuel burn and maintenance, owing to its much younger Airbus fleet, with an average age of five years. The airline’s younger fleet is also reflected in its higher ownership costs.

By keeping a mix of older MD-80s and younger used Airbus aircraft, Allegiant seems to be working to improve its fuel burn and maintenance disadvantage. 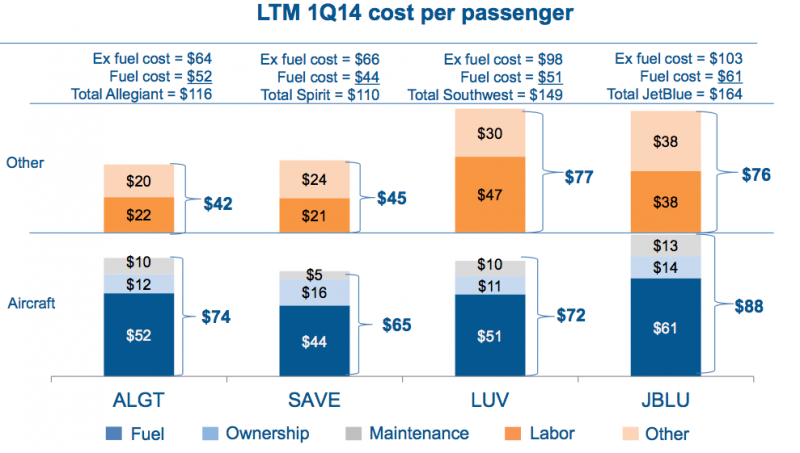 Despite its growing unit costs Allegiant does still maintain a distinctive cost advantage relative to other US airlines, particularly the so-called lower cost entities. But factoring in fuel costs, which for Allegiant remained essentially flat year-on-year in 1Q2014 and dropped 1.9% year-on-year in CY2013, Spirit gains a slight advantage over Allegiant.

Spirit’s slightly lower all-in unit costs show that the lower ownership cost Allegiant enjoys with its MD80s may be reaching the point of diminishing returns. 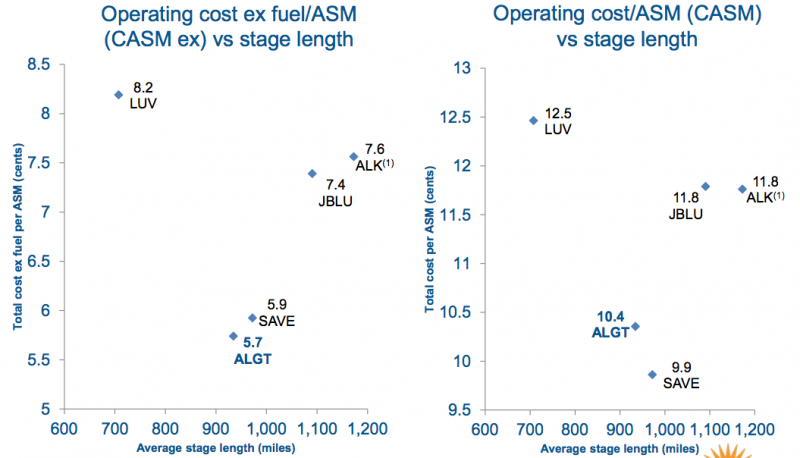 The airline noted that its performance in May-2014 outperformed expectations and revenue in Jun-2014 also should exceed previous forecasts. Allegiant has remarked that most of its estimated 7% to 8% ASM growth for 2Q2014 is weighted towards June, so its indications that June is performing better than expected indicate its capacity increases are being absorbed.

Allegiant’s better than expected unit revenue performance in 2Q2014 is against the backdrop of the introduction of 12 new routes, which can sometimes pressure unit revenues.

Among the new markets Allegiant has introduced during 2Q2014 is new service from Cincinnati to St Petersburg and Myrtle Beach, joining existing service from Cincinnati to Punta Gorda and Orlando Sanford introduced in early 2014. Previously Allegiant has explained that Cincinnati is a larger market than it normally links to its bustling leisure bases, but as the airline has grown in scale Cincinnati is now more viable. The market has also become more attractive for lower cost airlines as Delta has significantly cut operations in Cincinnati.

See related report: Allegiant continues to reap benefits of US consolidation despite its cost inching upwards

Near the close of 1Q2014 Allegiant was already pleased with bookings in the US summer high season of Jul-2014 and Aug-2014, and citing a favourable revenue environment.

Despite encouraging revisions to its 2Q2014 passenger unit revenue and total unit revenue projections, Allegiant’s unit cost pressure appears to be a fixture for CY2014.

The airline is taking some steps to mitigate unit cost pressure through enlarging the percentage of younger Airbus narrowbodies in operation during the next four years that should help with fuel and maintenance expenses. But uncertainty lingers over the outcome of labour negotiations and the necessary trade-offs Allegiant needs to garner from employee contracts to keep its unit cost advantage intact.

Even with the cost headwinds, Allegiant delivered a 16% ROIC for the 12M ending 1Q2014, recorded its 45th quarter of profitability during the first three months of 2014 and has returned USD354 million to shareholders since 2007. Those fundamentals show no signs of weakening; but Allegiant’s historical cost advantage would serve the carrier well when the inevitable weakening of demand does occur.