Alaska Air plays to historic strengths as it evolves

Alaska Air Group has always flown somewhat under the radar, even after its 2018 merger with Virgin America.

But even as it had a lower profile that some of its larger peers, Alaska maintained a certain level of balance sheet and commercial strength. And as airlines look to move beyond the pandemic phase of the COVID-19 crisis, Alaska’s long-time attributes continue to shine.

After the Omicron wave drove the US industry to a slower than expected start to 2022, Alaska is working to grow its capacity beyond pre-pandemic levels later in the year. The airline will also capitalise on network opportunities through its new partnerships and a reawakening on the US West Coast.

Before its merger with Virgin America Alaska Air Group was somewhat understated in the US aviation industry; but the company built up a strong franchise in the Pacific Northwest, and sustained consistent balance sheet strength.

And although some analysts and investors questioned the levels of debt Alaska opted to take on as it acquired and merged with Virgin America, the company calculated that its 2019 adjusted net debt to EBITDAR was 0.9x, compared with 2.1x for the industry.

As the COVID-19 situation began to intensify in early 2020, Alaska joined numerous airlines in the quest to build liquidity and also accepted aid from the US government.

But as 2021 drew to a close, Alaska’s debt-to-cap ratio was 49%, which the company explained was 12 points lower than in the previous year and within its targeted range.

Excluding CARES (Coronavirus Aid, Relief, and Economic Security Act) act funding from the US government, Alaska generated USD100 million in operating cash flow for the year, which was a milestone in such uncertain times.

Alaska gears up to grow beyond pre-crisis levels in 2H2022

Alaska is joining other airlines in concluding that the start of 1Q2022 will be rocky, due to a dent in recovering demand spurred by the Omicron variant of the coronavirus.

The company’s executives have stated that Alaska expects to be profitable in Mar-2022 “and for the remainder of the year” (CEO Ben Minicucci recently said during a recent discussion with analysts and investors).

“We do believe the virus will move to endemic status and that demand will ultimately stabilise”, said Mr Minicucci. “And when it does, our business model is set to outperform.”

At the moment Alaska is projecting that its capacity for 2022 will increase between 2% and 6% over 2019 levels. Its supply during the first half of the year will remain flat compared with pre-pandemic times, and could grow as much as 10% in 2H2022 – depending on demand.

Data from CAPA and OAG show that Alaska Air Group’s projected ASKs for early Jul-2022 are scheduled to increase solidly beyond the 2019 benchmark. 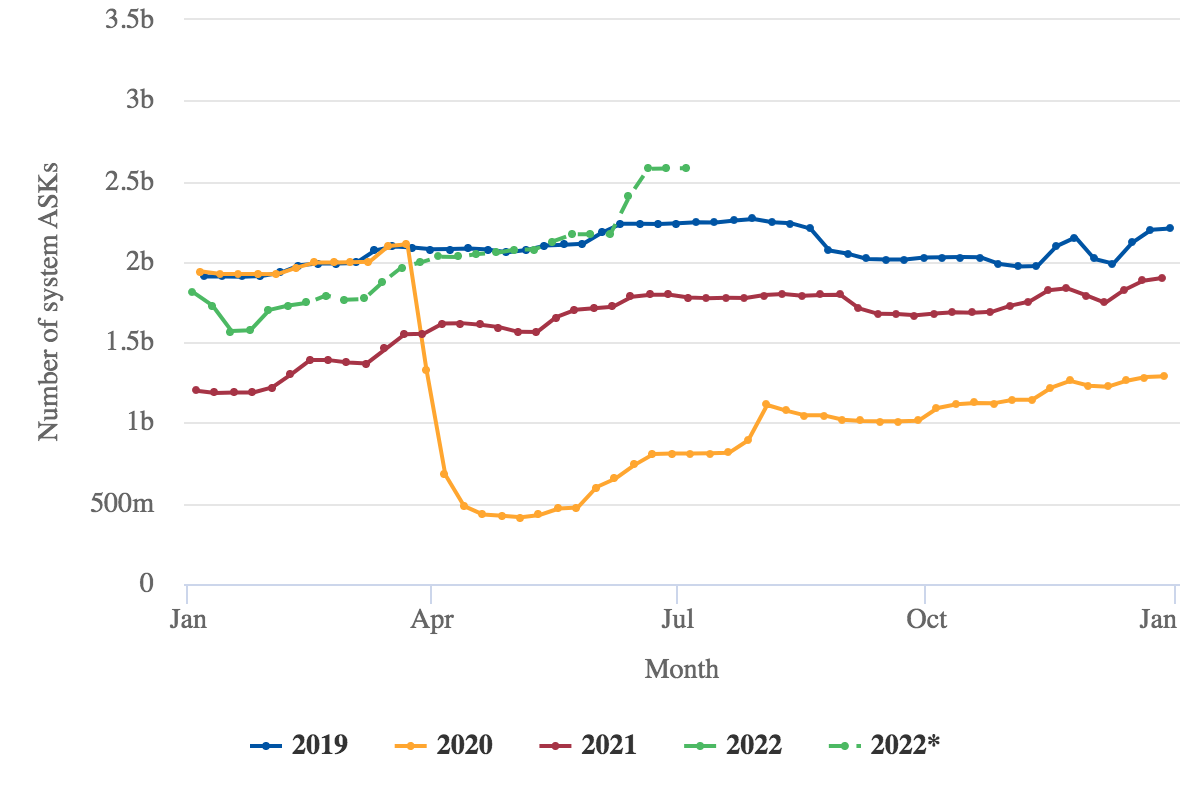 Partnerships with oneworld and AA will benefit Alaska Air in 2022

A membership in the oneworld alliance that began in Mar-2021 should also benefit Alaska as 2022 unfolds. Mr Harrison pointed to British Airways’ nonstop service from London to Alaska’s Portland hub scheduled to launch in the summer of 2022, and Finnair’s planned new route from Helsinki to Seattle.

Mr Minicucci believes the alliance will be a significant advantage for Alaska as international traffic begins to recover, “particularly in Seattle, where we give global access to our guests, and I think you’ll see accretive revenue to Alaska with that”.

Additionally, Alaska should also gain financial benefits from its new partnership with its fellow oneworld member American Airlines, which includes codesharing in markets from the US West Coast. Recently Cowen & Co analyst Helane Becker said that the company was expecting the codesharing partnership between Alaska and American to “be accretive to earnings, probably around mid-year [2022]”.

Overall, Alaska’s partners will have more than 100 nonstop weekly flights between the US West Coast and Europe during the course of summer 2022, said Mr Harrison.

Alaska is also preparing for demand to gain steam from its West Coast hubs outside Seattle. 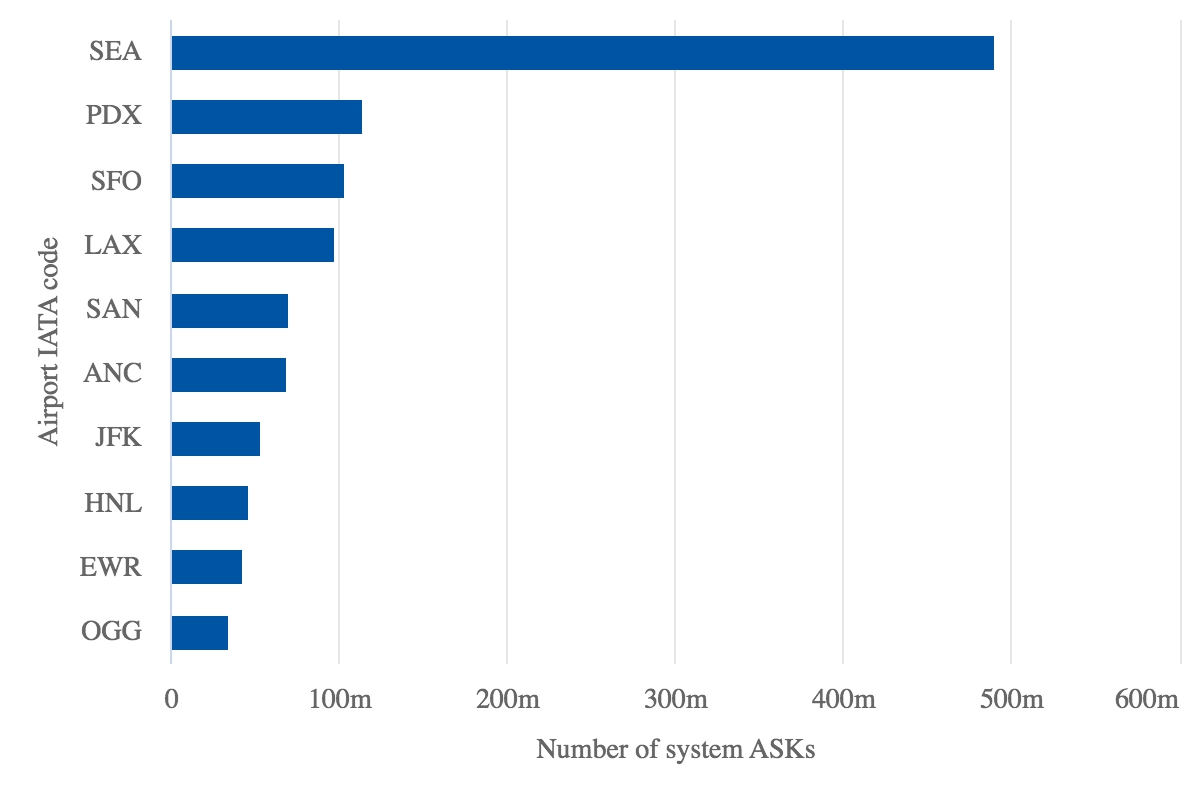 Although demand on the US West Coast has been slower to rebound, Mr Minicucci explained that he was excited about the region “coming back to life.”

He believes there is a lot of potential in the US state of California, “where it’s just ramped up a little slower than the rest of the country”.

Alaska enters a new phase in its evolution, with a solid foundation

Alaska Air Group has always maintained a quiet level of strength during the previous downturns and crises that the US aviation industry has faced. And although no crisis has arguably been as severe as the COVID-19 pandemic, once again Alaska appears to be on solid footing as the coronavirus moves to an endemic state.

Alaska is also entering a new phase of its evolution, where partnerships will be a key factor in its success.