Two and a half years or so after detailing its plan to purchase Virgin America, Alaska Air Group is hitting a post-merger stride, posting impressive revenue growth during 3Q2019, and is well on its way to delivering on promised incremental revenue targets for 2019.

The performance is driven by numerous factors, including an improving transcontinental environment and strong sales in premium products.

Alaska is also making some network changes in 2020 that include leveraging its power in the US Pacific Northwest, which should lay a foundation for a solid start to the year and help the company move closer to it targeted margins.

Alaska Air Group posted a 3.6% increase in yield year-on-year in 3Q2019, which lifted its unit revenues by 4.5%. The company’s management calculated that its unit revenue performance was 260 basis points better than the US industry, and its best absolute performance during the past three years.

Unlike its larger US global network airline peers, Alaska does not have as extensive an international network, which means it is shielded from headwinds those larger airlines have faced in trans Atlantic and trans Pacific markets.

As of mid-Nov-2019, only 5.7% of its total ASKs were deployed into international markets.

Alaska Air Group percent of domestic and international ASKs, as of mid-Nov-2019 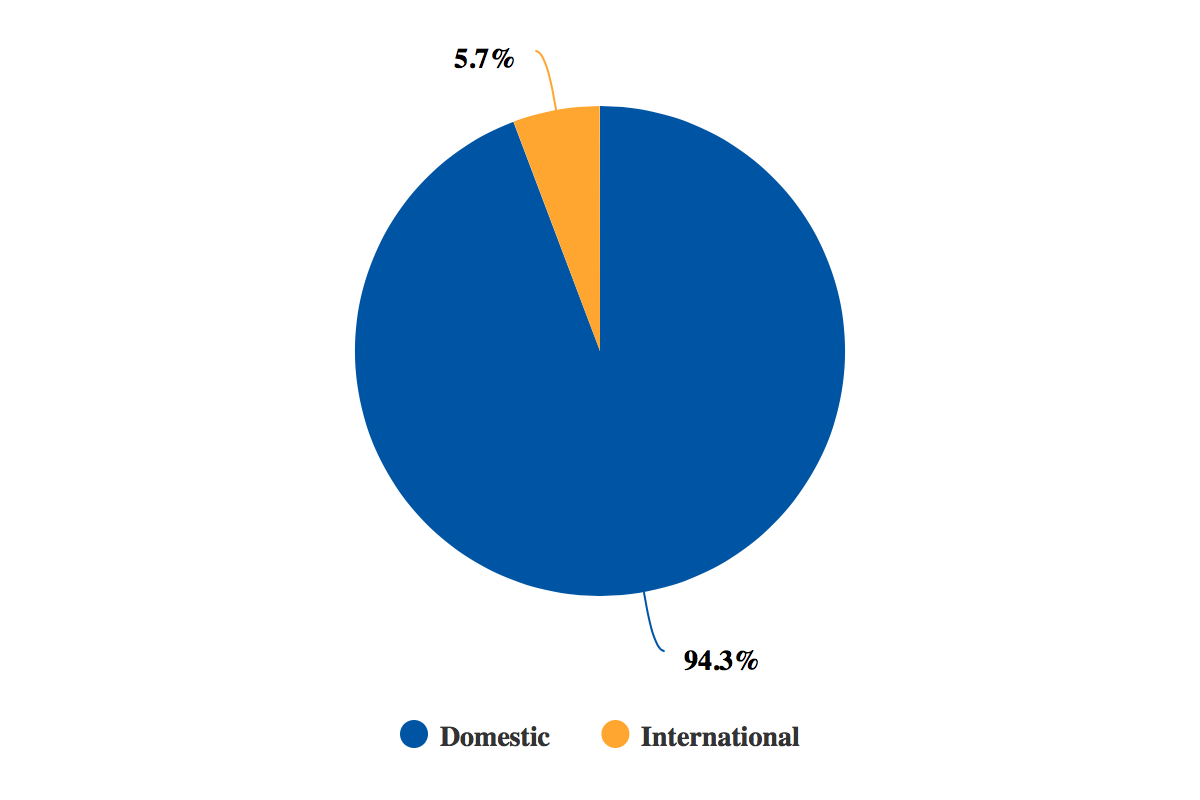 During 1H2019 Alaska faced some challenges on its routes to Hawaii when Southwest launched service to the islands, and the increased capacity put pressure on yields.

But the company’s management concluded that its routes to Hawaii had performed well during 3Q2019. “Notwithstanding the fact that the industry capacity and our own capacity were both up 7%”, stated Alaska chief commercial officer Andrew Harrison, who remarked that Alaska had produced a modest unit revenue increase in its Hawaiian markets during the quarter.

Alaska also encountered weakness in pricing on its transcontinental routes in early 2019, and worked to shore up its performance in those markets by engaging in more targeted marketing, cross-fleeting and strengthening its operational performance.

At the end of 2Q2019 Alaska’s management acknowledged that the company had “a long way to go” in bolstering its performance in transcontinental markets, but noted that (year-on-year) unit revenues had grown by double digits on its longer haul routes from California in 2Q2019.

By the end of 3Q2019, Mr Harrison concluded that Alaska had “achieved meaningful RASM [revenue per available seat mile] and margin improvements” on it transcontinental routes.

Previously, Alaska has stated that it would post USD330 million in incremental revenue in 2019, and Mr Harrison explained that unlike 1Q2019 and 2Q2019, the company’s initiatives to meet that target had “delivered their full annual run rate” in 3Q2019.

The improvements in Hawaii and US transcontinental markets obviously helped Alaska reach its targeted run rate for its revenue targets during 3Q2019, but the company also charted solid growth in its premium cabin products.

Its first class revenue was up 16% year-on-year in 3Q2019 on 10.5% more seats. Alaska has reconfigured Airbus narrowbodies it inherited from Virgin America, which include four additional first class seats, for a total of 12.

Alaska’s premium class revenue grew 13% year-on-year in 3Q2019 on 12% more seats, said Mr Harrison. He explained that Alaska’s network had shifted over the years, and now nearly 50% of the company’s capacity has a trip length of five hours or longer. “This drives strong demand for our premium products and we are very pleased with these results”, he said.

Given all those favourable elements, Mr Harrison remarked that “Three quarters into the year, we are confident that we will deliver on the [USD]330 million [in incremental revenue]” that Alaska aims to produce in 2019.

Alaska makes changes to its network, redirecting seats to points of strength

Alaska is making some network changes to maintain its revenue momentum and ultimately work towards meeting its margin performance targets.

In 2020 Alaska is adding services on the US West Coast, including flights to Spokane from San Diego and San Francisco; to Redmond from Los Angeles, San Francisco and San Diego; and to Boise from Los Angeles. Alaska’s regional partners are operating Embark 175s on those routes, which feature a two class configuration.

Mr Harrison remarked that moving the capacity around has, in some ways, reduced some competitive overlap for Alaska, “but net-net, we’re still putting roughly the same amount of seats in California”. But the new routes reflect a point of strength for Alaska – intra north-south routes on the US west coast.

Alaska’s momentum heading into the last quarter of 2019, along with planned network changes in 2020, are fuelling positive sentiment that the company is close to reaching its stated longer term margin targets.

Alaska Air Group appears to be moving solidly toward its post-merger goals, which has not always been the case for some of the more recent mergers in the US aviation industry.

Although there may still be some lingering concerns in the investment community that Alaska overpaid for Virgin America, some of that anxiousness could be allayed if Alaska maintains its current momentum and reaches its margin targets sooner rather than later.