Alaska Air Group’s merger with Virgin America was one of the more seamless in US aviation history from an integration perspective, and with the combination largely complete, Alaska is now working to reach its long term margin and leverage targets.

With the exception of Hawaii, the company is also benefitting from an overall positive pricing environment and has raised its unit revenue outlook for 3Q3019. Alaska is also reaping benefits from new revenue initiatives, including segmented fares and other ancillary products, as it works to deliver an ancillary performance that mirrors its larger network peers.

Alaska also appears to be benefitting from some stabilisation in highly contested transcontinental markets; however the airline is cutting some mid- and transcontinental routes as it works to maximise the overall profitability of its network.

After merger integration, Alaska works to reach its margin and leverage goals

With the bulk of its integration with Virgin America complete, Alaska Air Group has set long term financial targets that include a pretax margin performance of 13% to 15%.

During 2016 and 2017 Alaska’s adjusted pretax margins were 22% and 16.6%, respectively. But its pretax margin fell to 8.9% in 2018 when it faced competitive capacity pressure and the inevitable challenges from the merger integration.

After its long term debt to capitalisation jumped to 59% in 2016 after its acquisition of Virgin America, Alaska expects its leverage to settle at 43% in 2019, after repaying approximately USD1 billion in merger related debt. 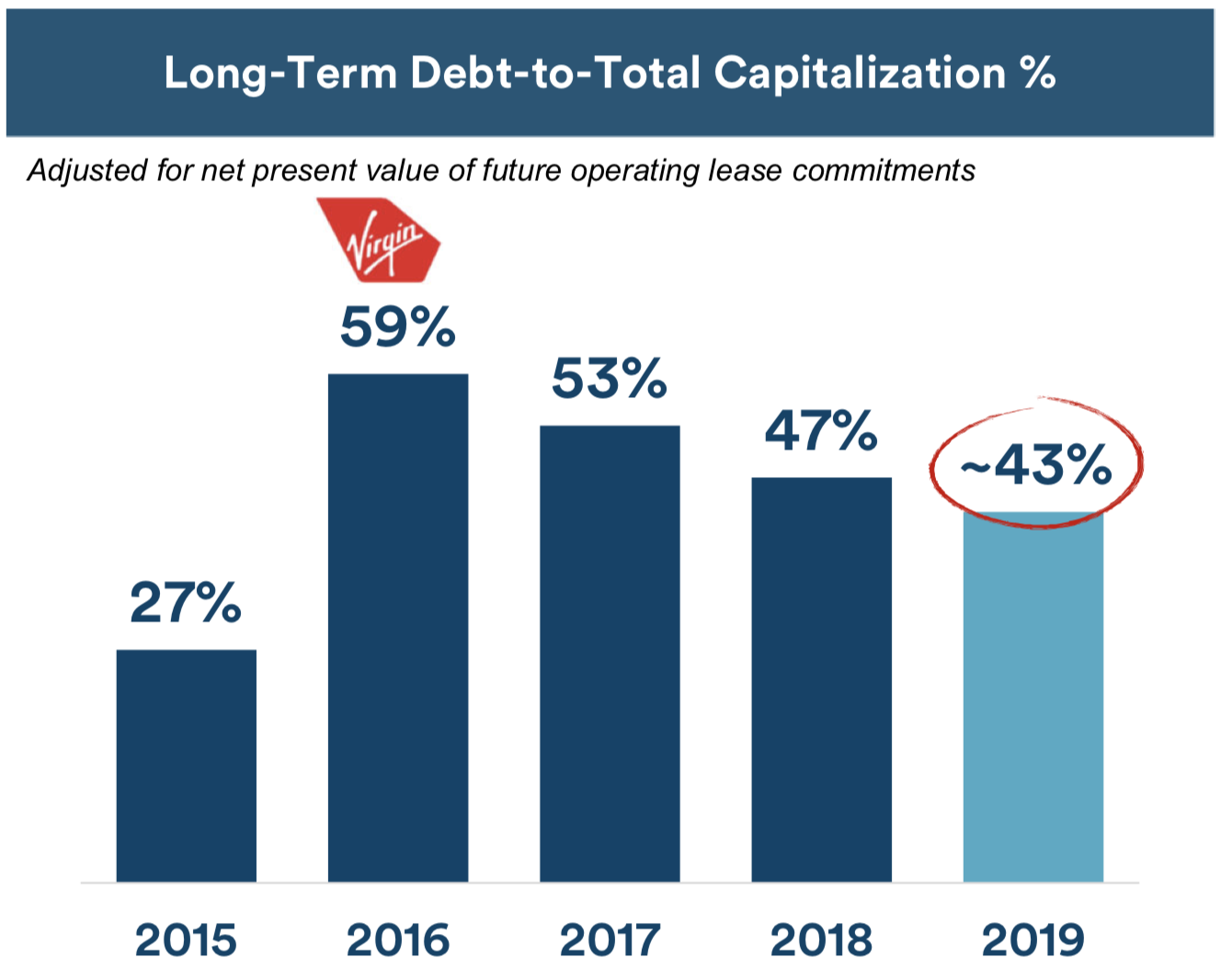 After the airline having grown topline revenues by 6% and decreased its selling expenses by 3% in 2Q2019, Alaska’s outlook for 3Q2019 has improved. It expects its unit revenue to increase between 3% and 5%, compared with previous estimates of growth between 2% and 5%.

Among the drivers of that improved outlook has been a stabilisation in pricing – particularly close-in and business fares that were low during the first three months of 2019.

Alaska’s brighter prospects are also driven by its own efforts to push revenue, including through its version of basic economy: Saver Fares. The company does not break out the performance of its segmented fares but has consistently stated that Saver Fares would generate USD100 million in revenue for 2019.

Bolstering its ancillary revenues is a key focus for Alaska, which admits that its current level of ancillary revenue of USD18.50 per passenger is below those of US legacy airlines. Alaska has several initiatives to drive up ancillaries, including tighter change fees, increased bag charges and upgrades to its food and beverage offerings.

Previously, the airline has outlined plans to offer exit row seats for sale, improving its post-sale revenue management, and engaging in dynamic pricing for premium classes.  Alaska is investing in a new revenue management system to replace its existing 20 year old platform, and the updated technology should help the company improve its ancillary revenue performance. 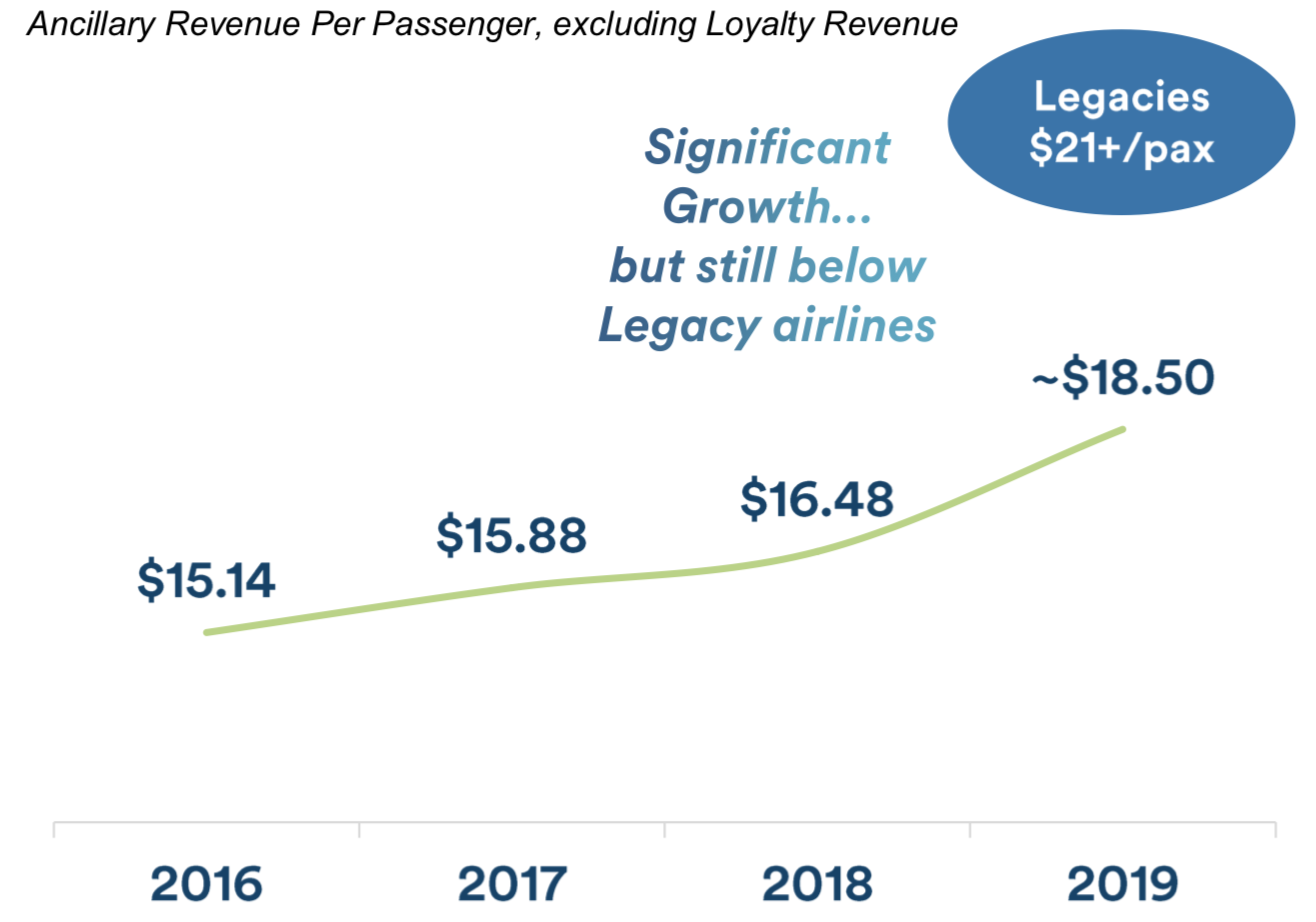 Another challenge that Alaska faced in early 2019 was weak pricing on its US transcontinental markets. After the merger with Virgin America it added several new mid- and transcontinental routes and later cut some of those markets due to underperformance.

After experiencing pricing weakness in its transcontinental markets during 1Q2019, Alaska worked to improve its performance on the routes by engaging in more targeted marketing, cross-fleeting and strengthening its operational performance.

At the end of 2Q2019 Alaska’s management acknowledged that the company had “a long way to go” in bolstering its performance in transcontinental markets, but noted that (year-on-year) unit revenues had grown by double digits on its longer haul routes from California in 2Q2019.

Beginning in 2020, Alaska is adding services on the US West Coast, including flights to Spokane from San Diego and San Francisco, to Redmond from Los Angeles, San Francisco and San Diego, and to Boise from Los Angeles. Alaska’s regional partners are operating Embark 175s on those routes, which feature a two class configuration.

The changes Alaska has made to its network reflect a return to areas where it holds a certain advantage – intra north-south routes on the US west coast.

In large part, those adjustments are just the natural course of puts and takes in an airline’s overall network, but since the merger and expansion into US transcontinental markets Alaska has made several adjustments to its longer haul network within the US, and the ultimate composition of its transcontinental network is not yet clear.

For now, Alaska appears focused on markets where it has a large brand awareness, and possibly an ability to bolster more high yielding connections through its hubs in California.

It appears that markets are still attempting to determine whether Alaska made the right move in acquiring Virgin America. Back in 2017 Alaska's stock pricing was trading around USD100, but more recently it has fallen into the mid-USD60 range.

Alaska is now deeply entrenched in proving it can meet its own stated financial goals and has a series of initiatives under way to meet those targets.

For now, there is little reason to doubt the company’s ability to achieve its aspirations, but investors may be adopting a wait and see approach.