Among the gainers, AirTran's shares jumped 10.8%, as the LCC reported a strong net profit of USD74.8 million 2Q2009, as it benefited from a combination of lower fuel prices, its decision to reduce capacity and its low cost structure, in what is otherwise a challenging and uncertain operating environment. AirTran CEO, Bob Fornaro, stated that, while the industry likely faces a slow recovery, AirTran's low cost structure puts it in a good position. He added that, as AirTran was one of the first airlines to react to the changing economic environment last year, it is “among the first airlines to show signs of recovery”.

Also reporting yesterday was Allegiant Air. Despite the carrier reporting another solid performance in the quarter, with a nine-fold increase in net profit, the carrier’s share price slumped 9.4%.

While Allegiant remains a star performer in the US aviation industry, there are a few signs of weakness for the carrier: probably the most concerning is that, for the first time in years, ancillary revenue per passenger declined (albeit slightly, to a still impressive USD32.36/pax), with average fares also down in the quarter (-13%), although the carrier expects this to trend upwards in 3Q2009.

The carrier, which operates a fleet of geriatric MD80 aircraft, is also unhedged moving forward, making the carrier very susceptible to significant oil price increases in the future. However, contrary to the investor reaction, Allegiant CEO and President, Maurice Gallagher Jr, remains optimistic, stating, “we find ourselves in an exceptional place”, with the carrier also remaining hopeful that Jun-2009 “may mark the bottom of revenue softness”, as it approaches the seasonally-weak third quarter.

Mr Gallagher, added, "fares for July, including ancillary, are, thus far, trending slightly upwards, despite the large year-over-year capacity increase we have in this month. An improvement in the revenue environment as well as the recent moderation in fuel prices will help us to extend strong year-over-year earnings growth into the third quarter, historically the seasonally weakest of the year,” he concluded.

The unique airline has always been an enigma for the market, which tends to interpret its results uncertainly. It seems that investors are particularly anxious at the slightest indication of weakness, in particular the three issues – of reduced yields (over the previous, low season quarter), reduced ancillary income per unit and a – predictable – sequential quarter-on quarter increase in fuel costs for the unhedged carrier. Compared to carrier’s sequential comparisons, RASM fell 12% year-on-year for the quarter. 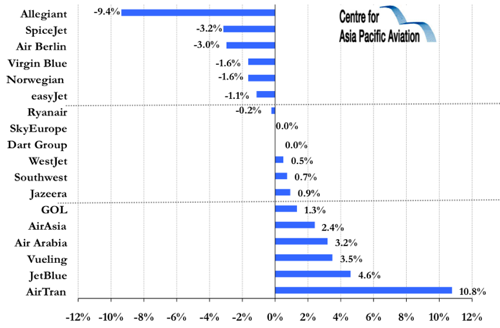