AirTran still prefers to concentrate on improving its balance sheet rather than distracting itself with mergers, according to Chair, President and Chief Executive Officer,Bob Fornaro and CFO Arnie Haak, who briefed analysts during the company’s first quarter earnings call.

Heaving a sigh of relief that it lost the Midwest Airlines deal in 2007, both executives indicated they will not be initiating any mergers but would entertain offers, not a wringing endorsement to be sure.

Mr Fornaro expects to benefit from any route rationalisation that may come from industry consolidation. “If you look at the Delta-Northwest merger there was very little benefit in our Atlanta market,” he said. “The biggest adjustment was in Cincinnati and the Ohio Valley and we are getting some benefits there. But, if you look at the merger discussions out there such as United-US Airways, they will need some capacity reductions to make it work. Both have substantial operations in the Eastern US and very large overlapping operations in Baltimore which would be ripe for carve outs. The legacies are profitable domestically to begin with so if you put them together there would be reduction benefits in the mid-Atlantic and, with United and Continental, it will take place in Cleveland. Either way, a merger creates benefits for AirTran which already does so well in small cities.”

But nothing is totally off the table. “In terms of initiating something right now, we are focusing our efforts on improving the balance sheet so we can get to a better position than where we were in 2007,” said Mr Fornaro. “That is really important to us. On the flip side, however, if someone took a peek we would have a fiduciary responsibility to look at it and make sure we're looking out for shareholders. If we can benefit and play a role in a transaction, in perhaps a carve out to get around certain competitive issues, we'd certainly take a look at that."

Mr Haak agreed. “In 2008, we suffered from several things including fuel and the fact that we were growing at fast rate,” he said. “We had large capex plans for aircraft, and all these multiple impacts had a drain on cash. If you look at what we’ve done, we have been more aggressive in hedging. We’ve diversified the network away from Atlanta and are doing more point-to-point rather than price-sensitive hub flying. We have also completed the re-optimisation of the schedule at Atlanta. And we are holding back on growth until we have a stronger balance sheet than we had going into 2008.”

Forward bookings for May and June "exceptional"

CEO Fornaro reported forward bookings were strong. “We look at the bookings for May and June and they look exceptional. We are going to have a good April; not as strong as March but that will be followed by exceptionally strong May and June. I think you’ll hear similar comments from others because, last year, bookings were breaking down at this time. They are firming now and through the summer.”

The two executives said expansion to the West Coast except to serve the Milwaukee market was not in the cards. “There is a lot of short-haul capacity on the West Coast,” said Fornaro. With our restructuring, the West is not going to play a big role although in Milwaukee it will have a bigger role.” He also reported that all the news about airline service in Milwaukee is not only sparking more interest from passengers but is driving more business into Milwaukee. “It’s a great opportunity going forward and we feel really good about what is going on up there.

After four consecutive quarters of profitability, AirTran Holdings Inc posted a loss of USD12 million in the first quarter, a devastating swing from the year-ago period when it earned USD28.7 million. It benefited from USD4.7 million in unrealised gains on future fuel hedges, without which it would have had a net loss of USD16.7 million. 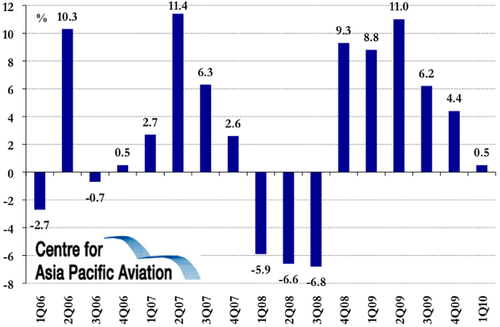 The company posted record total revenues of USD605.1 million on a record load factor of 77.2 percent for the quarter but suffered from both the horrific storms this winter as well as a 50% spike in fuel. 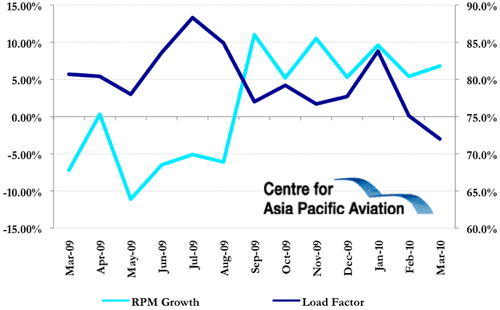 However, AirTran experienced significant revenue improvement that accelerated through the quarter with total unit revenues increasing by a solid double-digit margin year-over-year in March. “We are really starting to see benefits of network diversification,” said Haak. “We are heading into our strongest quarter and we are in an extremely strong position at Milwaukee. In addition, Orlando convention traffic is coming back this summer and into the fall.”

Total operating costs increased 21.8% or USD602 million compared to the same period last year. Fuel was the single largest contributor to the cost increase, accounting for over 60 percent or USD67.3 million of the increase. Last year, crude oil averaged USD41 per barrel in the first quarter but has risen to USD78 this year. Winter storms further pressured unit costs due to reduced capacity and additional expenses related to extreme weather during the quarter. The carrier’s other revenues grew 13.6% to USD63.4 million.

"This winter proved to be one of historic inclement weather for much of the East Coast and particularly for some of our busiest operations like Baltimore/Washington and Atlanta," said Mr Fornaro. "Even though the weather was tough this winter, we are experiencing significant revenue growth and passenger demand. We are well positioned for the future and are beginning to reap the rewards of our diversification efforts and the broader economic recovery."

The company said it leads the industry with the lowest non-fuel operating cost per mile among major airlines on a stage-length adjusted basis.

"We have largely completed the re-optimisation of our network. We are seeing the benefits from broader geographic diversity while extending our reach on a national scale and establishing a solid base for future growth," said SVP, Marketing and Planning Kevin Healy. "The result of this effort is a more balanced network, reaching more passengers than ever with our award-winning, high-quality, low-cost product."

AirTran finished the quarter with an unrestricted cash position of USD534 million and its revolving line of credit was undrawn.

The company expects ASMs to increase about 4% in the second quarter with total revenue per ASM (TRASM) posting double digit gains at 13-14%. Its non-fuel operating cost per ASM will increase 4%-5%, about the same that it expects for the full year. 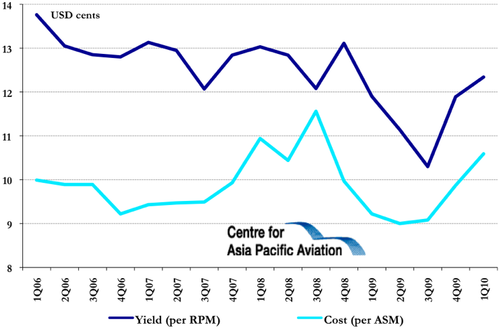