AirTran Airways reported its fourth consecutive profitable quarter when it announced a net income of USD17.1 million for the three months ended 31-Dec-2009. For the year, it posted an economic net income of USD93.6 million, or USD0.67 per share, which excludes gains on its future hedge portfolio and other onetime items. 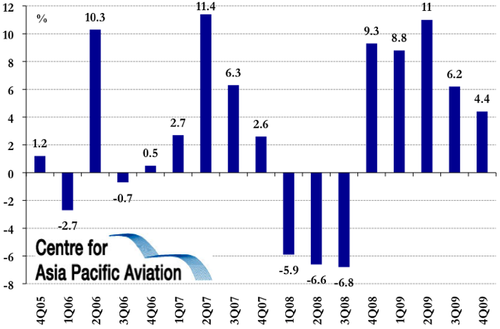 He also boasted its annual load factor of 79.8% was an all-time high, with ex-fuel costs at the bottom of the industry on a stage-length adjusted basis. On revenue performance, he echoed the rest of the industry in saying the pace of improvement quickened in the last two months, with expectations for it to continue this year.

Revenue passenger miles have weaved up and down during the year, finishing at 5%, while load factor has not taken the dramatic ups and downs as RPMs. Still, load factor finished just under 80%, down from a high of nearly 90% in the July period. 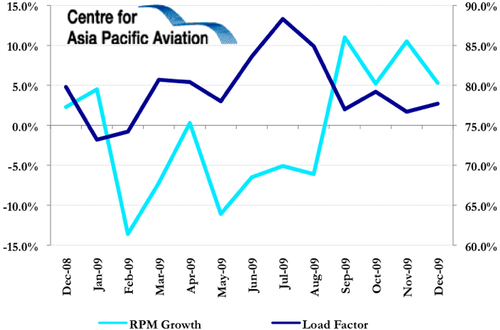 It plans slower growth this year and will focus on improving its capital structure as well as network diversification and fuel hedging.

CFO Arne Haak pointed out that the 4Q2009 results included a USD7.1 million unrealized gain on appreciation in the value of future fuel hedges, putting its economic net income at USD10.1 million.

Capacity for the quarter rose 8.1% with the addition of two Boeing aircraft in September coupled with a 4% increase in utilization compared to the year-ago period. Revenue passenger miles rose 6.9% making for a 4Q2009 load factor of 77.4%, the second highest fourth quarter load factor even experienced.

Any further capacity increases would come from increase utilization and probably not until Summer.

Other revenues increased USD25.8 million or 71%, partially offsetting the unit revenue decline and resulting in a 6.1% decline in total unit revenue.

The relationship between CASM and RASM at AirTran has always kept pace in the right direction, with 4Q2009 CASM just under 10 cents and RASM in the 12 cent range, as the airline puts a continuing focus on reducing the former and increasing the latter. 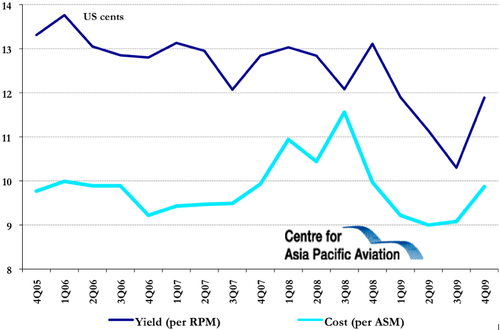 Not convinced about Southwest (bags) effect

Senior VP Marketing and Planning, Kevin Healy, reported that there is room to grow ancillary revenue with new products, although growth will be a bit slower than it has been.

He discounted what is being called the "baggage effect", as Southwest claims it is gaining share with its bags-fly-free policy. “There are a lot of things, I think driving the numbers at Southwest, not least of which is some of the schedule changes they’ve done,” said Healy. “They’ve closed the historic gap and load factor with the rest of the industry. We spend a fair amount of time trying to understand what is driving purchase decisions and I don’t know that I would conclude or wouldn’t conclude that baggage is the only thing going on there.”

Year-end capacity was down 2.2% from the year-ago period, as traffic declined 1.9%, resulting in a 79.8% record load factor. Total unit revenue for the year was down 6.3%.

Haak pointed out the pace of revenue improvements with year-on-year yield declines going from negative double digits in October to mid single digits in December.

Total operating costs declined slightly in the fourth quarter over the year-ago period, while non-fuel adjusted costs clocked in at USD6.49, up 0.6% over the year-ago period. Maintenance proved challenging, up 26.4% resulting from a contract increase in the company’s B717 Rolls-Royce power-by-the-hour deal. However, all other non-fuel unit costs dropped 2.6% during the quarter. However, such costs increases will not occur in the 2011 period.

Full-year unit costs ex fuel rose 5.3% to USD6.39 versus the year-ago period, although maintenance accounted for half the jump. Fuel cost was USD2.09 for the quarter, including hedging, while full year was all in at USD1.88 per gallon.

The hedge percentages by quarter are 46% in Q1, 40% in Q2, 37% in Q3, and 39% in Q4. Our portfolio consists primarily of crude based coal options and wide colors based on crude oil and heating oil. Despite the benefits from our fuel hedge portfolio, we expect that our fuel costs in the first quarter of 2010 to be up year-over-year.

Fuel costs are again rising, but AirTran is well hedged for the year and even took an unanticipated gain of 7.1 million last year.

AirTran ended the quarter with USD543 in unrestricted cash and equivalents, the highest in company history. For the year, cap ex was USD16 million and USD5.1 million for the quarter.

It seems airports are a growing theme in cost discussions this earnings season, with AirTran the third airline to mention the problem.

“We get very concerned about new projects at airplanes that provide very little function,” said Fornaro. “That’s been going on for a couple of years and there doesn’t seem to be a whole lot slowing it down. If you go look around a lot of other places, where you see 10% less capacity and overall costs go up, a couple of percent drives a lot of cost. We’re seeing some substantial increases in Baltimore this year and some of that relates to some new projects. There are some very major construction going on. I think our costs are going up 20%, 25% for departure, it’s a pretty big number there.”

Fornaro reported that it hopes to cut a deal similar to the one Delta did with Atlanta over Hartsfield costs, adding he thought that would keep the facility a low-cost airport.

Haak also reported that advance bookings and yield are continuing to improve. January will be down from last year as the result of a very strong leisure load in Jan-2009. Unit revenues in the period were up nearly 10% which will not be repeated this year as weaker advanced books were experienced over the last two months. However, January will be followed by stronger unit bookings in February and March to finish the quarter with unit bookings rising 2.5% to 3.5%.

Benefiting from Midwest’s decline at MKE

The executives discussed the Milwaukee market, noting that things have changed very fast there. Healy reported that most of the good will Midwest Airlines built up over the years was lost in about six months, supporting AirTran’s own decision to move into Milwaukee. “I think clearly Midwest does not have anywhere near the following that it had a couple of years ago,” Executive Vice President of Corporate Development Steve Rossum agreed, stating, “it’s changed very, very fast, there are a number of things that you can’t keep but if you’re in the community you would see a really big footprint that we made within the community.”

Fornaro pointed out that AirTran was in 18 of the top 20 O&D markets from the city, while Healy pointed out AAI has always held that the market was underserved. “I think a lot of the characteristics have been assigned to Milwaukee is that it’s a small business market and there’s not enough demand there with more of a reflection of the type of airline and lack of competition than anything else,” he said. “If you have the cost structure and the product we obviously drive a lot of leisure to Florida, the West Coast and other markets, but I also think that you are seeing an increase in business travel in general. Over the year Milwaukee will be even stronger.

“Even Southwest coming in has a beneficial impact of raising awareness in Northern Illinois, parts of Chicago, that will drive more business into the Milwaukee market,” he continued. “So I think it’s not that different than other markets that we’ve entered where with the right price structure, with the right cost structure you can do very well.”

In response to a question of its service versus that of its new partner, SkyWest, he said it was a concern for the airline. “It really goes to one of the bigger issues in entering into the agreement with SkyWest,” said Rossum. “We made an effort to separate the two. We’re not branding the airplane or the service. It’s very clearly differentiated as SkyWest and working in partnership with us. It’s five airplanes and there really is no significant growth plan at all in that agreement at this point. I think we are in the key group. There maybe one or two more, but it’s really designed to support the overall growth of the Milwaukee hub and so far it was also a real good start.”