Atlanta-based AirTran Airways reported its best-ever profit for the first quarter, posting a net gain of USD28.7 million in 1Q2009. It was a USD64 million turnaround from a USD35.4 million loss in the same period last year.

12 months ago, the LCC model was on the ropes amid surging fuel prices. Now, some of the world’s focused LCCs, led by Allegiant and AirTran are reporting solid financial results, thanks to:

AirTran’s shares catapulted up 24.2% yesterday as the airline disclosed it expects to be profitable for the rest of the year after getting back into the black in 4Q08 after extensive cost and network cuts earlier in the year. The carrier also gained from some asset sales and aircraft deferrals to bolster its cash balance. 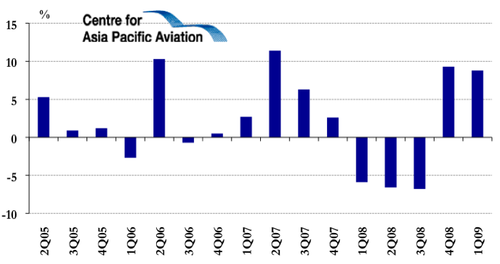 AirTran’s turnaround was achieved despite falling top-line revenue (-14.2% year-on-year) in the quarter. The result was helped by an 86.4% leap in revenue from fees for baggage and other services, to USD55.9 million, or 11.5% of the total.

Despite the strong growth in this area, AirTran still has significant opportunity in the ancillary space. Ryanair, for example, achieves twice the proportion of ancillary revenues to total revenues, at 21.8% in the three months ended 31-Dec-08 (its fiscal third quarter), and is continuing to increase.

Ryanair ancillary revenue as a proportion of total revenue: 1Q05 to 3Q09

Continental Airlines’ shares meanwhile slid 9.3% yesterday, after President and COO, Jeffery Smisek, admitted, “there remains a lot of uncertainty about the economic environment and we don’t yet know how deep or long this recession will be, whether or not we’ve hit bottom, how long we’ll bump along the bottom once we hit it and what our rate of climb out of that bottom will be”. He added, “all we can really say right now is that the rate of decline of our [revenue per available seat mile] appears to be decelerating as compared to the rate of decline we experienced in the first quarter”.

It was a much more dour assessment of the current environment than Delta’s Richard Anderson the previous day. Delta’s shares fell 5.7% yesterday.

Continental disclosed a net loss of USD136 million in 1Q2009. The result was attributed to fewer business travellers and a dilution of yield in the leisure segment. The carrier added that the relaxation of fare rules has lowered the fences between business and leisure demand and allowed business travellers to book at much lower fare levels.

Continental reported yields fell an astonishing 35% on trans-Atlantic services, while back cabin yields on Pacific services were relatively strong. Continental plans to cut mainline capacity by 7% in 2Q2009 and 4-5% for the full year of 2009, including a 2-3% cut in international markets. The carrier is expecting RASM to be down by 13% to 15% for April. 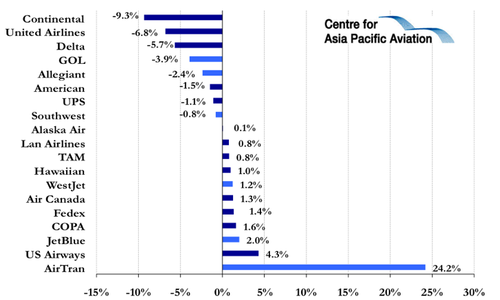