The over-capacity Australia-Southeast Asia market is showing signs of improvement with airlines beginning to reduce capacity. Qantas and Singapore Airlines have down-gauged services, Qantas from 747-400 to A330-300 while Singapore Airlines has replaced a daily A380 flight at each of Melbourne and Sydney with a smaller aircraft.

Qantas has exited the Perth-Singapore market while Scoot continues to offer reduced frequencies on its Australian services. Garuda has abandoned plans to deploy 777-300ERs to Australia.

But these initiatives so far are largely the low-hanging fruit of cutbacks. Qantas still faces a reckoning of a Singapore-Australia market only slightly larger than Emirates’ Singapore/Malaysia-Australia market. Capacity has yet to come out of Malaysia, where AirAsia X has aggressively built a presence, while Malaysia Airlines tenuously holds its ground in its largest international market, despite a higher cost base and mounting losses.

Raising frequency would not have helped Qantas either, as no amount of capacity would correct its lack of ability to transfer traffic beyond Singapore at anywhere near the scale of Singapore Airlines, which also operates with a lower cost base.

Qantas also could not compete with the growing impact of low-cost carriers.

LCCs on the Singapore-Perth market consisted of Tigerair and the Jetstar Group, and in a significant development were joined by Scoot, which brought widebody 777-200 capacity to the market. Tigerair and Jetstar operate A320s between Perth and Singapore. At around five hours flying, Perth-Singapore was a route passengers were more willing to fly a LCC on than longer sectors. 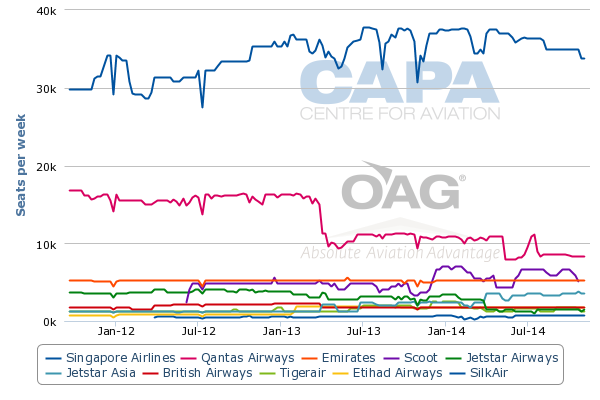 Qantas in May-2014 announced it would further decrease Singapore-Australia capacity by down-gauging Brisbane-Singapore and Sydney-Singapore services from 747-400 to A330-300. (One of two daily Sydney-Singapore services is already operated by an A330-300. The second daily service will become A330-300 from Sep/Oct-2014.) This potentially offers efficiency as Qantas will operate an all-A330 service to Singapore.

Qantas' Singapore load factor dipped considerably in 2013, and the first two months of 2014 (which is the latest data available), Qantas is performing better than in 2013. Further data in 2014 should indicate deteriorating conditions amongst the various carriers. Anecdotally, mid-week load factors can be below 50%, with the passengers carried having a very low yield. 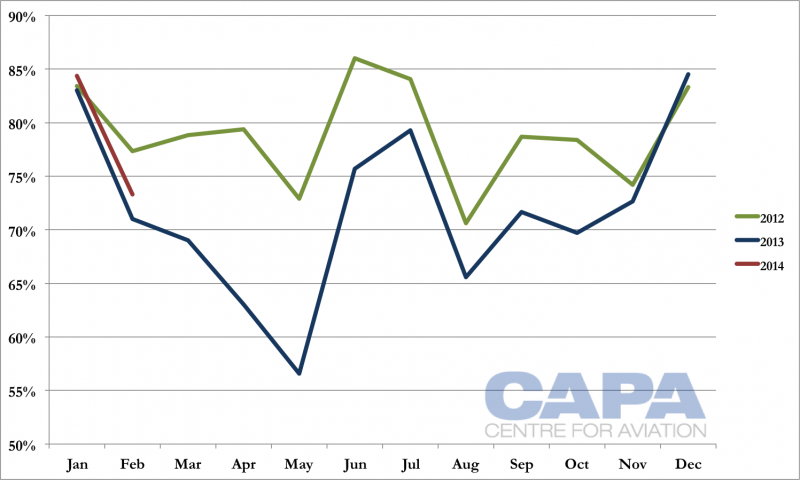 In this same change, Qantas announced down-gauging of Hong Kong-Sydney A380 services. Combined with re-timing Melbourne-London services, the A380 fleet has time to replace the 747-400 on Sydney-Dallas. The benefits are multifold: the A380 will introduce greater capacity (Qantas projects 10%). The A380 will also be able to operate non-stop on the return sector from Dallas to Sydney whereas the 747 could only go so far as Brisbane, requiring a connection (and in some instances, re-fuelling in the South Pacific was required). Third, the A380 will likely require a lower seat block than the 747.

Other Asian markets also await strategic initiatives from Qantas, and these were analysed previously. An outstanding strategic matter for Qantas to address at a group and even partnership level is the Melbourne-Singapore route. Qantas continues to operate daily A330-300 service while Emirates operates a daily 777-300ER service and Jetstar operates five weekly A330-200 services for the week of 19-May-2014.

Qantas' aggressive pricing on Singapore sectors has left little room for Jetstar, forcing Jetstar to reduce frequency between Singapore and Melbourne. From the route's launch in Dec-2010 until early 2013 Jetstar operated a daily service. From Mar-2013 however Jetstar reduced frequency for the first time, but never dipping below five weekly flights. However in 2014 Jetstar for a few weeks will operate only four weekly flights and during one week will even operate three weekly flights, according to OAG data.

Cumulatively, Jetstar operated a daily Melbourne-Singapore flight in 2011 and 2012 but only 287 flights in 2013 and is scheduled to operate only 255 flights in 2014, a 30% reduction. Jetstar from Jul-2014 will exit the Singapore-Auckland market. Given the current situation of Qantas and Emirates operating between Melbourne and Singapore in addition to SIA, it is difficult to see Jetstar have a sustainable presence.

Any further cuts in this market from the Qantas Group will likely impact Jetstar more even though Jetstar has stronger prospects on the route in the long term than Qantas. This underscores the strategic relevance the Qantas Group still places on loss-making international services. 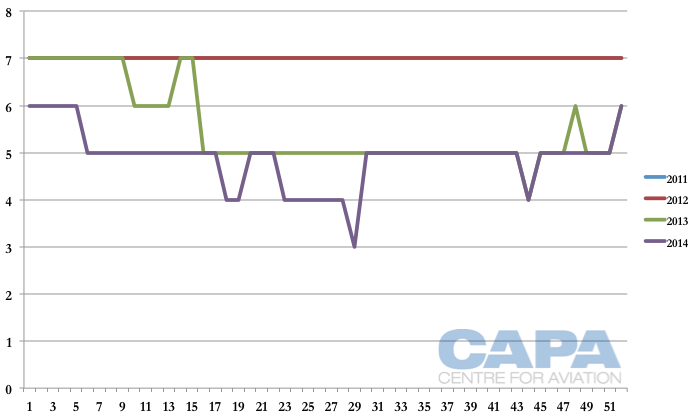 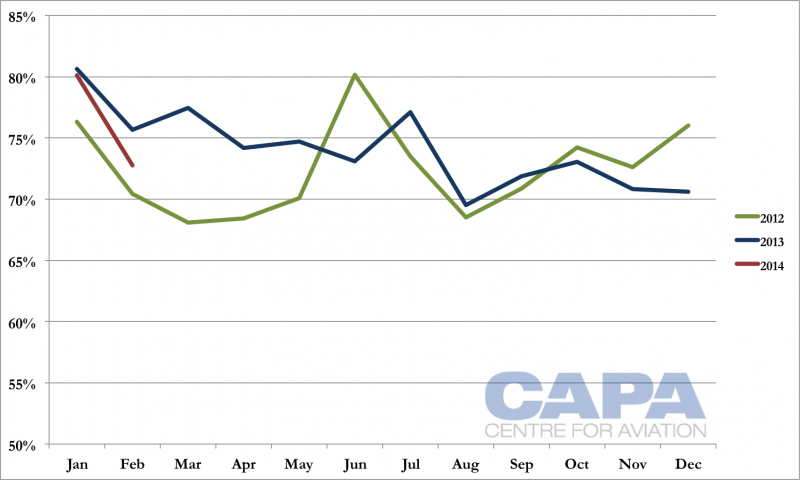 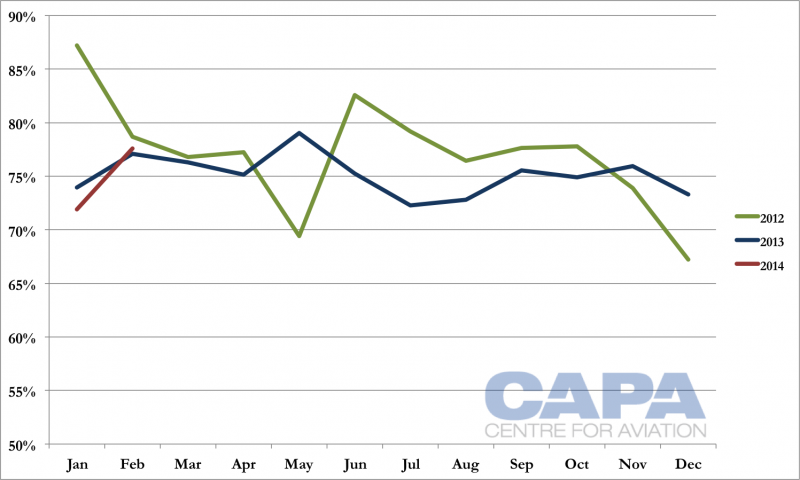 Emirates' approximately 7,400 weekly seats on 21 frequencies will compare to Qantas' 8,300 seats weekly on 28 frequencies, giving Qantas only 12% more seats. This small lead is in spite of Qantas being the local operator while Emirates' services operate on a fifth freedom basis. There are some passengers who continue on these Emirates flights to Dubai, but Emirates nonetheless continues to operate them with some local traffic.

Singapore Airlines cuts back on growth, to reduce capacity below 2013 levels

The disparity between Qantas and other carriers is perhaps most evident when considering Singapore Airlines. SIA will retain its position as the largest carrier between Singapore and Australia with about 35,000 weekly seats in Oct-2014. Qantas will still be the second largest carrier but with only 8,300 seats. To put this into perspective, SIA will operate more seats between Singapore and Sydney only (9,100) than Qantas will from all Australian points to Singapore. Even Perth will see almost as much SIA capacity (7,700 seats) as Qantas' entire Australia-Singapore network.

Singapore Airlines started 2014 bullish with some weeks having capacity growth as high as 15%. But from late Aug-2014, SIA is turning pessimistic with high single-digit capacity cuts. The last three quarters of 2014 will experience less than 1% seat growth from SIA compared to a year prior, according to OAG data. 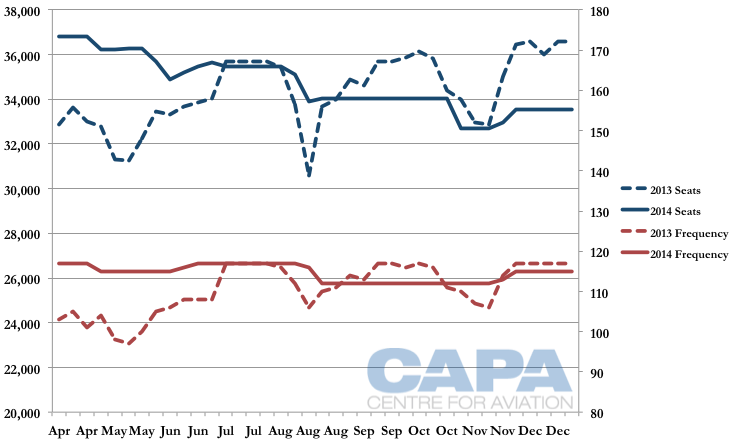 At the same time however SIA is seeking to maintain a strategic advantage by offering more frequencies. SIA is doing this by down-gauging some services, notably from A380s to 777s. While seat growth will be less than 1%, frequency growth will be just over 3%.

The network changes are not universal. Brisbane will have relatively no changes; Perth will show growth; Melbourne and Sydney will have cuts while Adelaide shows proportionally large cuts. SIA is dropping Sydney capacity in Jun-2014 but will not cut Adelaide and Melbourne capacity until Aug-2014. This likely indicates the severity of the Singapore-Sydney situation where Qantas has two daily flights while British Airways has a daily flight and Scoot now less than daily, creating large over-capacity in the market. 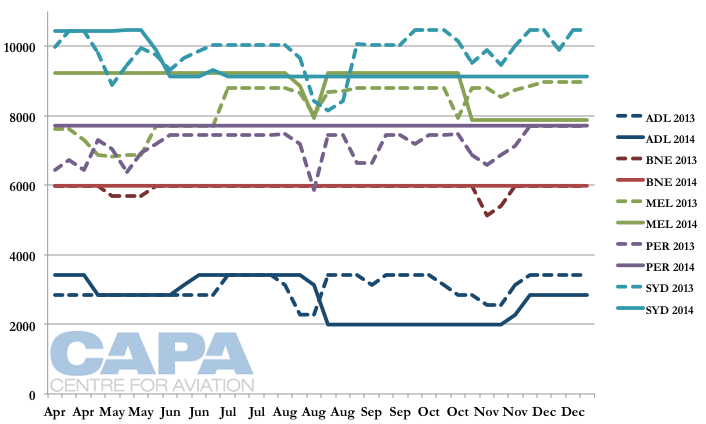 Singapore Airlines has sought to decrease Australian capacity while preserving its network by down-gauging A380 services. In Jun-2013 and Jul-2013 SIA operated four daily services to Sydney, including two A380s, but in Jun-2014 and Jul-2014 will down-gauge one of the A380 services to 777 while keeping overall frequency at four daily. Melbourne will also lose one daily A380 flight. 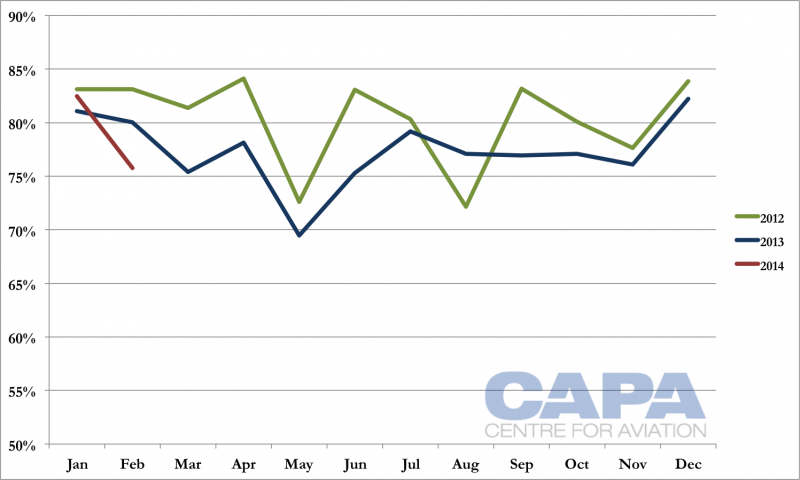 Scoot has also cut back from previous levels

Scoot, the wholly-owned low-cost long-haul carrier of SIA, cut Singapore-Sydney frequencies from daily to five weekly in Mar-2014, with further cuts to four weekly. Daily services will resume in peak periods through Oct-2014 while off-peak periods will see reduced services. 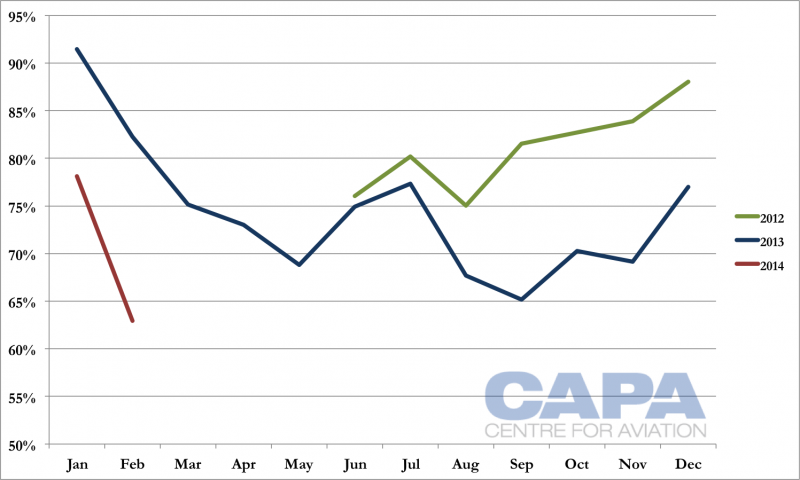 AirAsia X and Malaysia Airlines are yet to adjust Australian capacity

The Southeast Asia-Australia capacity increases have largely been led by AirAsia X, which rapidly grew partially in response to the entry of Scoot. AirAsia X sees that it must be the largest long-haul LCC in the markets it operates in, essentially saying it will fight a market share battle. Malaysia Airlines also increased capacity to match AirAsia X. Neither plan to cut capacity. Conversely, AirAsia X is planning growth in Dec-2014. 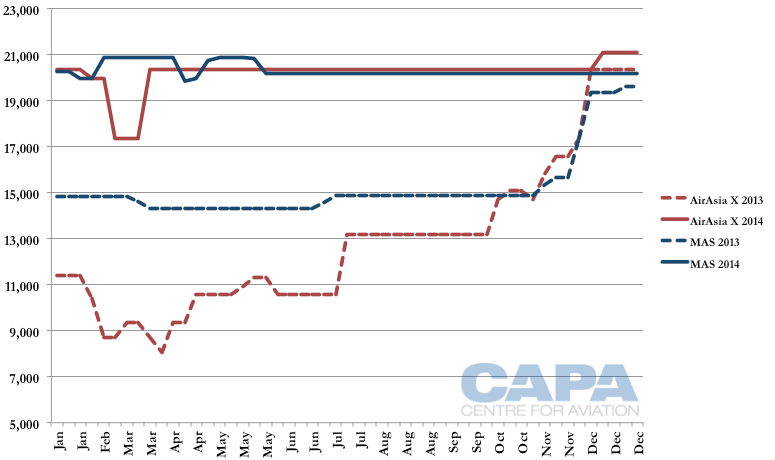 However, MAS and some other full service Asian carriers have a strategy of chasing load factors in exchange for lower yield. 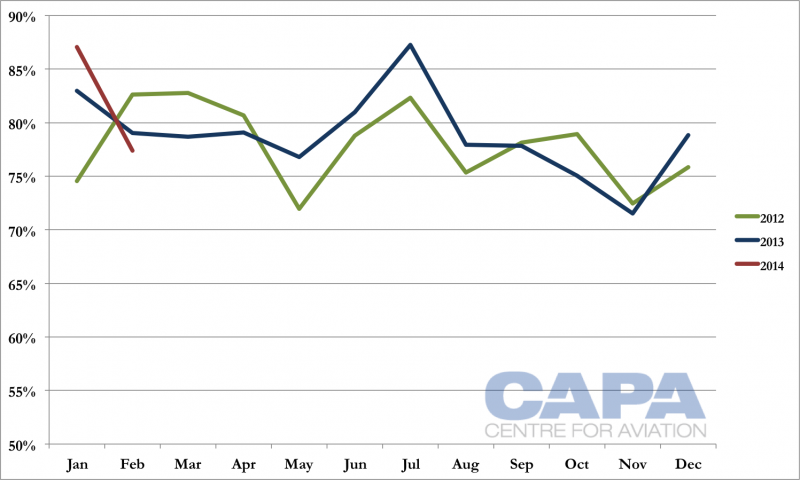 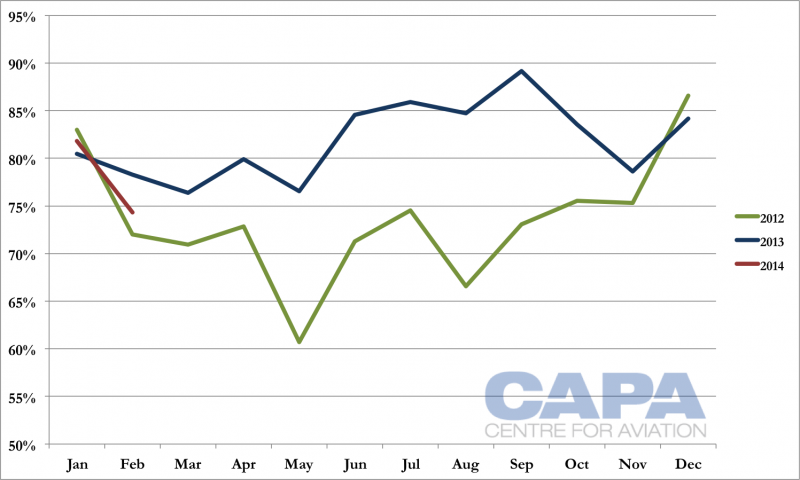 Garuda Indonesia meanwhile has smartly reneged on plans to operate its new 777-300ER between Jakarta and Sydney, which would have only exacerbated the Southeast Asia-Australia situation.

The original deployment plan had the initial batch of four aircraft being deployed on new non-stop services from Jakarta to London Gatwick and on the existing Jakarta-Sydney route. Garuda initially planned to launch Jakarta-London on 2-Nov-2013 with five weekly 777-300 frequencies. At the same time it was also intending to use 777-300ERs to take over from A330s on its daily Jakarta-Sydney service.

Garuda in Apr-2013 began selling its London service as well as a one-stop same plane product between Sydney and London. It also started promoting one-stop connecting flights from Melbourne and Perth to London. (Brisbane-London was also available for sale but as a two-stop product because Garuda only serves Brisbane from Bali while its other three Australian destinations are served from both Bali and Jakarta.)

Dropping plans to operate non-stop flights to London is also a sensible move for Garuda as the local Jakarta-London market is not large enough to support the flight and the carrier would have struggled to secure enough connecting passengers to make the route viable. On the London end, connections would be difficult as Garuda has been unable to secure slots at London Heathrow, where there would be more opportunities to work with other SkyTeam members.

At the Jakarta end, Garuda’s only feasible option besides domestic connections was Australia connections as other destinations in Asia-Pacific would require backtracking and Garuda’s regional international network is much smaller than rival SIA or Malaysia Airlines (MAS).

But the Australia-London market is extremely competitive and Garuda would have likely had to sell tickets below cost to fill up the seats, particularly as it was offering unattractively long connection times at a congested airport with an inferior transit experience compared to most Kangaroo route hubs. By banking heavily on Australia connections in its original strategy for the London market Garuda was making a risky bet.

Garuda’s targeting of the Sydney-London via Jakarta market would have placed it in competition on the Kangaroo Route that is also suffering from over-capacity.

Virgin Atlantic has exited Australia by cutting its Hong Kong-Sydney tag. The overall Europe-Australia market will become more competitive as Etihad eventually deploys A380s to Australia. Turkish Airlines – with a network of over 100 European destinations – has also mooted serving Australia, possibly with A380s. This was Garuda’s battle to lose, and it is sensible for the Indonesian flag not to engage in it at all.

Outlook: More adjustments are needed, but some fledging airlines will see this as their opportunity

While airlines recognise the dire situation of the Southeast Asia-Australia market, most see the problem as a collective one that requires adjustment from all parties. Consequently this means carriers are at best willing to take only incremental steps, and at worst are waiting for others to move first. Other airlines may be taking a long-term view and are trying to muscle out weaker ones. AirAsia X, with a leaner cost base, certainly has stronger prospects than its higher cost local rival Malaysia Airlines.

Yet rationalisation can also create opportunity as fledging new entrants – especially low-cost carriers from Southeast Asia – see a void they can fill. With 10 low-cost carriers considering the Australian market, there is no shortage of contenders.

Full service carriers are more structurally at risk but have the size to try to fight out this difficult time. Low-cost carriers meanwhile potentially have long term potential but short term financial targets to meet. While there are some positive developments in reducing capacity, there is still plenty of opportunity for the situation to become worse before it improves.