Airbus to up A330 production, Boeing may produce more than 10 B787s per month

Responding to high levels of market demand, Airbus announced plans to increase production from eight to nine aircraft per month by early 2012 and 10 a month by 2Q2013. The A330 has won orders over the past few years, as Boeing customers seek to fill fleet gaps due to the three-year delay to the B787.

The production decision will not affect A330 deliveries 2011. It does place more pressure on aircraft parts suppliers that are struggling to deal with production increases across many Airbus and Boeing models.

Airbus has also announced that it has cancelled an order for 12 A330 freighters from India’s Flyington Freighters, due to disagreements over deposits for the aircraft.

Meanwhile, Boeing announced it may be able to increase output of the B787 jetliner beyond its previously announced target of 10 per month by end of 2010. Once both B787 production lines in Seattle and Charlotte are fully operational, Boeing could raise output to 15 aircraft per month. Boeing’s B787 firm order backlog stands at 851 aircraft, with deliveries due to commence in 3Q2011 to All Nippon Airways.

Boeing has lost 32 orders for B737s, after Dubai Aerospace Enterprise pulled almost half its outstanding orders for B737s. The company, which announced orders for 200 Airbus and Boeing aircraft in 2007, began restructuring the orders in mid-2010, cutting 18 A320s and seven A350s from its Airbus orders and cancelling 10 B777s and 15 B787s.

Shares in EADS, parent of Airbus, were down 0.4%, while Boeing eased 0.1%. Shares in Bombardier surged 6.5%. Reports emerged that Qatar Airways is close to placing an order for the company's new CSeries, although a formal announcement may not come until the Le Bourget Air Show in Jun-2011. 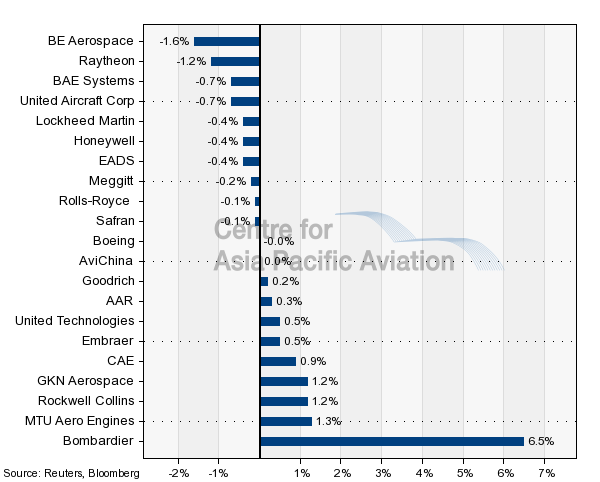