Airbus is expected to announce an order for 100 aircraft from China this week, following a state visit by Chinese President Hu Jintao to France. The order would be a major boost for the manufacturer, which is lagging well behind rival Boeing in aircraft orders this year. Airbus has 328 firm orders for the year to Sep-2010, compared with Boeing’s 478.

Boeing recently lifted its 20-year outlook for China from USD400 billion to USD480 billion, accounting for 4330 aircraft. The size of the Chinese commercial aircraft fleet is forecast to triple over the next two decades. Boeing expects to retain its 50-52% market share in China, while Airbus and other manufacturers such as COMAC, Embraer and Bombardier share the rest.

Shares in EADS, Airbus' parent, gained 0.8% yesterday, while Boeing shares fell 1%. Boeing has reportedly pushed back some early B787 deliveries due to the need to bring already completed aircraft up to certification standards. Japan Airlines stated that its initial B787 deliveries have been pushed back from 1Q2011 to 2Q2011.

Boeing has not commented on any more delays, although delivery to B787 launch customer All Nippon Airways is reportedly unaffected and will go ahead in Feb-2011.

Vietnam Airlines announced late last week that it plans to order another eight B787s, and will lease a further three. There was more positive ordering news for Boeing yesterday, when BOC Aviation announced an order for eight B777-300ERs, to be leased to Thai Airways International. 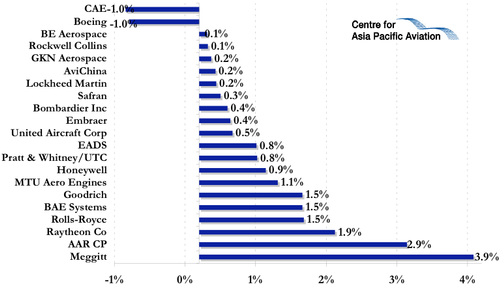 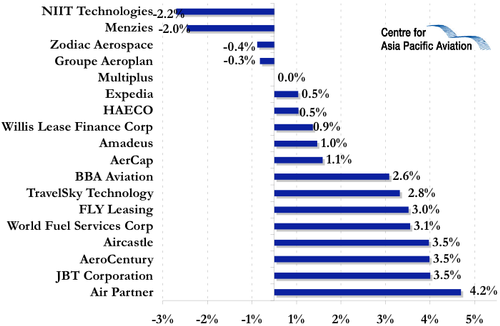