Airbus has launched a stinging attack at Boeing, as the WTO Panel on the EU/US trade dispute handed down its final decision on the case yesterday. While the actual report itself is still confidential (and will be for another few months), the final decision, much like the similarly confidential Sep-2009 initial decision, has produced a flurry of rhetoric from the major players on both sides of the Atlantic.

The B787 is the “most heavily subsidised aircraft in history”, according to Airbus. The European manufacturer added Boeing’s current “enthusiasm” for the WTO and its decisions is unlikely to survive the initial ruling on the EU counter case against US subsidies for Boeing, due in Jun-2010. Airbus expects that ruling to be "significantly disappointing for Boeing and largely different to what they are predicting", according to Airbus spokeswoman, Maggie Bergsma, speaking with Reuters.

Allan McArtor, Chairman of Airbus Americas, talking to the Chicago Tribune stated that decision has “reconfirmed what we have always said: reimbursable loans are a legal instrument and they have not caused one single job loss to the US aerospace industry.”

Likewise, Boeing has quickly seized upon the WTO decision as a “powerful, landmark judgment” and a win for “markets, not parliaments”. It had earlier used the eve of the WTO decision to lambast Germany for reportedly committing EUR1.1 billion to the A350 XWB programme.

US political representatives from Washington State, where Boeing is based, were triumphant. Talking to the Miami Herald, US Senator Patty Murray, stated the final ruling "puts any doubts to rest - launch aid is an illegal subsidy that has cost American jobs, hurt our ability to compete and damaged our overall economy”, while Representative Norm Dicks opined that Airbus “could not have achieved the growth of market share - harming US workers - without its pattern of illegal assistance.”

Leaving aside the rhetoric, both sides can claim at least some victory points, but the decision (almost inevitably) has been mixed.

Airbus has quickly pointed out that 70% of the US claims were dismissed and that the loan mechanism used by the UK, Germany, France and Spain to support Airbus’ aircraft programmes is a “legal and compliant instrument” of government/industry partnerships.

Airbus though, has been forced to admit that the WTO considers past loans “contained an element of subsidy”. This is a definite win for US trade negotiators and Boeing and something that Airbus will “study”.

However, Airbus also notes that US requests for remedies were rejected as "legally inappropriate”, potentially closing off avenues for legal challenge. This is a reversal of the Sep-2009 interim decision, which judged that some aid provided by European government payments to Airbus was "actionable".

Given that nothing has been made official (yet), there are still numerous points of contention over what exactly the report contains and what the implications are for Airbus and Boeing. Each manufacturer maintains that the decision backs their respective positions on the legality of subsidies and any material harm done to Boeing and the larger US aerospace industry.

In its commentary on the final decision, Airbus stated that neither aid or any other measure has caused "material injury" to any US interest, leading it to claim that no European measure caused job losses or lost profits in the US aircraft industry. Boeing has meanwhile stated that subsidies to Airbus have “significantly distorted the global market for large commercial airplanes”.

Will it really bring a level playing field?

According to Boeing, the decision “should level the competitive playing field once and for all with Airbus, as well as set an important precedent for other nations with aspirations to enter the commercial airplane business.” But with the EU counter case still pending, the dispute between Airbus and Boeing is expected to drag on for years.

European governments will continue to provide reimbursable launch aid to Airbus, and Boeing will continue to get tax breaks and other incentives from US states, as well as major military contracts from the US Government.

The existing Airbus/Boeing market duopoly for large commercial aircraft is unlikely to be upset any time soon. Both are largely profitable and there is plenty of upside in the global aircraft market, which is valued at USD3.3 trillion over the next 20 years. A final resolution will inevitably involve politicians on both sides hammering out a compromise on civil aircraft manufacturing.

In the background of all of this are China and Russia, which are moving to get their large aircraft manufacturing industries on track, with new narrowbodies due to appear in the middle of this decade. Both attempts are being underwritten by massive state-owned enterprises (AVIC/Comac for China and UAC for Russia) and equally massive state support.

And the winner, according to the market? 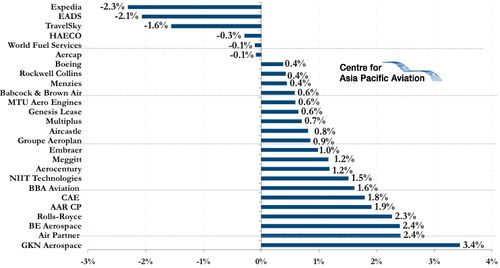