Airbus, Etihad and Mubadala. The aviation world shifts to its axis. Is Boeing next?

Last Friday's announcement to the Paris Stock Exchange that Etihad has confirmed its USD10 billion order with Airbus is momentous, coming at such a pivotal time in aviation's transformation. The order mostly relates to 25 A350-1000s, but is also likely to include 6 A380s and 20 A320s.

It gets better. With the formal commitment reportedly comes an agreement to locate a significant part of EADS/Airbus' A350 composite construction to Abu Dhabi, with the emirate's investment arm, Mubadala, centrally involved.

This would be the first significant off-shoring of EADS' widebody construction, although China - with its extensive order book too - has already secured construction rights to parts of the single aisle A320.

Etihad had said that its original order was firm, but until now Airbus had not formally published it, suggesting that there were still details to be worked out. The suggested deal would be consistent with a fair degree of arm twisting.

If the Abu Dhabi reports are in fact correct, this will entrench for the long term a very important shift in aviation evolution.

The timing is critical for several reasons:

Another aspect likely to become progressively deeply valuable to the UAE concerns the grant of bilateral air access into France. As EADS becomes more beholden to Abu Dhabi, challenges from Air France (and other European airlines) aimed at slowing or restricting Etihad and Emirates' access to the European markets will fall on deaf ears.

As liberalisation is one of the three key external ("metamorphosis") elements central to UAE airline expansion, it is only to be expected that there would be some quiet nods and winks in the bilateral direction too - after all this becomes a trade deal first and foremost, not an airline rights issue.

And is there more to come?

.....Emirates Airline is a cornerstone buyer for the A380

This agreement may not be the end of the story either. EADS is going to be highly exposed to Gulf orders, particularly if other airlines continue to seek to delay or cancel earlier. So the fact that neighbouring Emirates Airline also has a big investment in EADS could become increasingly relevant.

The Dubai-based carrier ordered a total of 57 A380s - of which it is already operating three - and rumours abound of the wealthier UAE emirate of Abu Dhabi (also the capital of the UAE) planning to take a stake in its bigger competitor. The potential is for the A350 deal to be merely the thin end of the wedge.

....Boeing will need to have similar negotiating clout

Then there is Boeing. Both manufacturers are significantly exposed to Gulf orders and Etihad alone also has a USD10 billion order for Boeing aircraft.

The US manufacturer recently strongly resisted union claims which would have prevented it from taking construction or assembly offshore, thus theoretically allowing responses, if necessary, to EADS' competitive moves.

Boeing and Airbus orders from Etihad Airways and Emirates Airline

As Airbus links orders with this sort of attractive enticement, it gets harder and harder for Boeing to avoid following suit. So, heartened by the European experience, it is not a large leap of faith to expect that similar pressures will be exerted on other manufacturers.

Even if Etihad/Mubadala do not seek to exercise their clout with the outstanding USD10 billion order for Boeing aircraft, there are other candidates.

Other Middle East airlines and their governments will be watching the Etihad experience with interest. Saudi Arabia, for example, is still pondering a significant order for large long haul aircraft. And Boeing would dearly love to have another buyer for the B747-8. The Middle East has to be the best bet for sales in the current environment, with few alternatives.

Airbus and Boeing orders by region 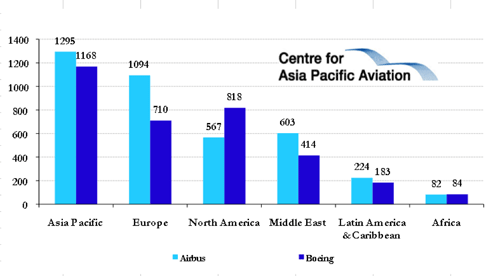 Source: Centre for Asia Pacific Aviation and Ascend
(Note: Another 430 aircraft [356 Boeing and 74 Airbus] are not allocated geographically)

But if Boeing is to make any such move, it must carefully calculate its timing. With a recent costly strike and a new President in waiting who is likely to be responsive to the machinist union's reactions about off-shoring, it will not be so easy to follow Airbus' lead.

So, even if EADS had to be dragged kicking and screaming to reach this reported agreement, it may turn out to be a blessing in disguise for its future sales opportunities.

But then again, if President Obama sees value in forging closer relations with the Middle East countries, entertaining proposals such as this can be a wise course. Such are the political dimensions of the sporty game.