Airbus continues to celebrate A330 sales success, pulling in another order (three A330s from Oman Air) this week. The A330 is nearly two decades older than its most direct rival, Boeing’s 787, but the aircraft continues to match the newer aircraft in terms of popularity. When Boeing launched the 787 programme in 2004, the aircraft was seen as a major threat to A330 sales. However, the predicted paucity of A330 orders has failed to materialise, with sales of the older jet meeting those of its newer rival almost on a one-to-one basis over the last decade.

Since the launch of the 787 in 2004, Boeing has sold 890 of the carbon fibre and composite aircraft. The manufacturer claims that the aircraft is 20% more fuel efficient than “similarly sized aircraft” such as the A330 and its own 767. The aircraft is also billed as offering a similar level of savings in terms of maintenance costs and an overall 10% lower cost per seat mile. The 787's iconic value is also being marketed strongly by its operators. 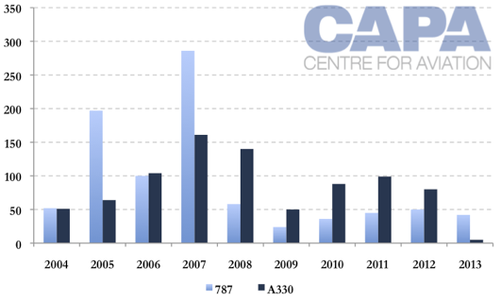 More sales looming for Airbus, although China is playing hardball with the EU

2013 has so far proved an exception to the rule – Boeing has sold 42 787s and Airbus just five A330s – but the European manufacturer is still talking to a number of potential customers for the older jet. As always diplomacy can play an important role in this high profile business.

During an April visit by French President Francois Hollande to China, the state-owned China Aviation Supplies Holding Company signed a commitment to acquire 18 A330s. A deal for 45 A330s for Chinese carriers had been held up since 2012, over China’s objections to the EU's decision to introduce an airline emissions trading scheme. The EU has since backed away from the emissions plan, imposing a one-year moratorium to allow a solution through ICAO, somewhat relieving the impasse over the sale of the aircraft. But the stakes have been revived - perhaps partly as a negotiating strategy - as China is refusing to accept EC demands for payment of outstanding "fines".

If these issues are resolved, more Chinese sales could be on the way. China had originally planned to acquire 10 A330s each for Air China, Hainan Airlines and China Southern, with 15 for China Eastern. The fate of the remainder of the 45 aircraft deal still remains uncertain.

Qatar Airways also revealed in Mar-2013 that it is interested in up to 15 A330s, to fill the gap caused by the delivery delays with the 787. Similarly, AirAsia Group CEO Tony Fernandes has said he is interested in the A330 and would also like Airbus to do an “A330 neo” revamp of the aircraft.

Delta Air Lines, which operates 33 A330s, may also be another repeat buyer for the aircraft, despite having 18 787s already on order. Delta CEO Richard Anderson said in an interview with Reuters this month that Boeing would have to lower the price of the 787-10X, a double stretch of the baseline 787-8, if it wants the aircraft to take sales away from the A330.

One of the main drivers of A330 orders has been the series of delays with the 787, which saw Boeing’s new aircraft enter service a little more than three years behind its original schedule. Problems with early aircraft being overweight, GEnx-1B reliability issues and a slew of other minor ‘squawks’ leading up to the high-profile 100 day grounding has not helped matters, or the aircraft’s reputation with the public (although this will be shortlived). Despite this, Boeing maintained production through the period and intends to deliver more than 65 787s this year.

Boeing’s problems have been Airbus’ gain. In order to fill the capacity shortfall created by the delays to the 787, airlines and opportunistic leasing companies have turned to older twin-engine widebodies to meet their requirements.

Even Boeing’s venerable 767, which was expected to see sales peter out when the 787 was launched, saw a minor renaissance. Boeing’s backlog for the 767 has actually increased over the past few years, with 62 orders for the aircraft still outstanding, as many carriers sought to cover the capacity shortfall created.

Some of the increase was also tied to compensation arrangements for the 787 delays, particularly with All Nippon Airways and Japan Airlines. 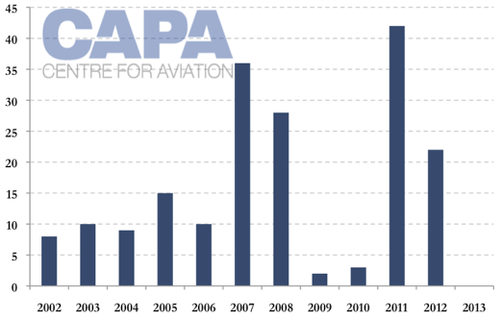 After years of 767 sales barely breaking single digits, orders jumped in 2007-2008 after 787 delays were announced. There was a second jump in 2011-2012, when fresh problems surfaced with the aircraft. With the present production rate of two per month, Boeing will still be delivering 767s when the aircraft celebrates its 35th birthday.

Also behind the A330’s continued sales success is the 787’s crowded delivery schedule. The popularity of the new Boeing aircraft has meant that near-term production slots are almost completely filled. Even with a number of order cancellations for the aircraft, production slots for the 787 are full through to 2017 and there are precious few others available up to 2020.

The lack of slots for the aircraft has not helped Boeing’s sales teams; it is difficult to sell aircraft that will not be available to customers for at least another four to five years. The solution is to ramp up output, which Boeing is now considering.

Boeing is producing around seven per month at present, but the manufacturer plans to raise output to 10 aircraft per month by the beginning of 2014 and has confirmed it is looking at stretching beyond this. With two production lines in simultaneous operation, Boeing has the capability to raise production to around 15-17 per month. Much depends on the situation with the supply chain, which has been the Achilles heel of the aircraft in the past.

Airbus continues to push A330 upgrades

For its own part, Airbus has taken several measures to respond to the demand for its A330 and to keep the aircraft as competitive as possible. It has increased production to meet the added interest and offered a dedicated freighter version of the aircraft to create a new demand stream. Airbus has also continued to stretch the range of the aircraft well beyond the 4,000nm limit the aircraft had when it first entered service in 1994.

In Apr-2013, Airbus reached an A330 production rate of 10 aircraft per month. This is the highest ever production for an Airbus widebody and represents a doubling of production for the aircraft over a nine-year period. 2012 marked the first year Airbus delivered more than 100 A330s. 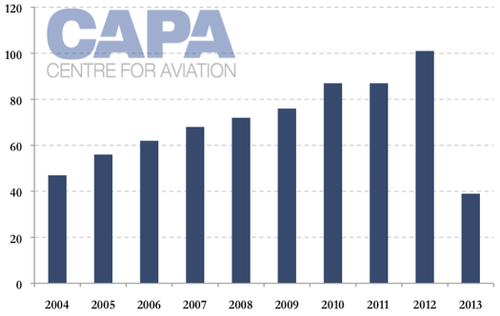 Production was due to go up to 11 aircraft per month in 2014, but the fight over the European emissions trading scheme prompted Airbus to talk about suspending the planned increase.

Like Boeing, Airbus is keen to reduce the length of its waiting times for its aircraft, but has not confirmed whether it will go ahead with the higher production rate, given that the EU ETS issue is only partly resolved.

Airbus has also continued to refine the A330, offering more range, better fuel burn and other detail improvements, including better cabin features and avionics. In 2008 and 2010, it increased the maximum takeoff weight to add more range to the aircraft. It has followed this up with a number of other improvements.

Midway through 2012, the company announced it was lifting take-off weights to 240 tonnes and offering a 1% improvement in fuel burn via an aerodynamic improvement package derived from the A350 programme. A further 1% improvement in fuel burn from engine enhancements is expected to come from engine manufacturers. The improvements offer up to 400nm in additional range. Towards the end of 2012, Airbus announced yet more enhancements, raising the take-off weights of the A330-300 and A330-200 to 242 tonnes, increasing maximum range once again.

Improvements in the A330 seek to narrow the gap with the 787, although the Dreamliner retains the edge

For all the A330’s recent success, the 787 clearly shows the way of the future.

Despite the onwards march of aviation technology with the 787 and A350, the A330, now entering its third decade of service, has continued to win orders for Airbus. Far from being forced to cede the mid-sized widebody market to Boeing and the 787, the A330 has managed to peg its more fancied North American rival. With nearly 1,000 A330s in service and an order backlog of more than 280 – better than two and a half years' production even at today’s record pace – as well improvements to the aircraft in the pipeline and more customers sizing up orders, the A330 will remain a viable competitor for years to come.