AirAsia was one of the few Asia Pacific airlines whose share price advanced on 18-Nov-08.

The shares bolted over 4% in early trade, but faded to a 1.8% gain by the close, on reports its founders are still negotiating to obtain finance to take the carrier private. Founders, Tune Air, own approximately 31% of AirAsia.

The global credit crunch and the slowest predicted GDP growth in Malaysia in eight years in 2009 (of +3.5%) could however hamper the AirAsia privatisation attempt.

Elsewhere, airline stocks in the region were mostly in the red on weak sentiment about the outlook for the global economy. Qantas shares were buffeted by reports of an incident involving two of its aircraft on the ground at its Avalon maintenance base - the latest in a string of mishaps for the carrier. 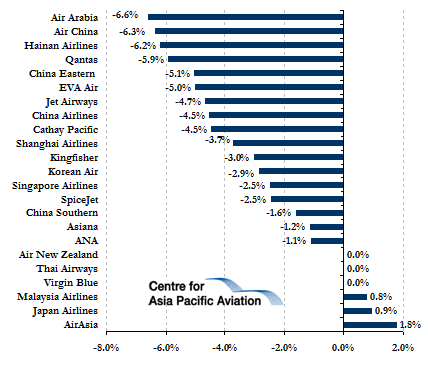