AirAsia, the Asia Pacific region’s largest LCC, has proven its staying power in a slow but recovering market in 2Q2010, turning in what it describes as a "record quarter" for second quarter revenues. The carrier commented that the result builds on the “momentum of its first quarter profits” and sets the stage for a “potentially dynamic” second half.

AirAsia shares have risen by 24% since the start of the year, below Tiger Airways' 26.5% rise but outperforming the Malaysian benchmark KLSE's 8.3% increase. The carrier’s shares were down 1.8% ahead of the result.

In other AirAsia news, the LCC confirmed it is working with Sovico Holdings Joint Stock Company to develop a suitable structure for the proposed venture in Vietnam. It includes the option of AirAsia initially providing operational and management services to Vietjet Aviation Joint Stock Company for a prescribed period before an investment is made.

In other Indian news, non-listed LCC, IndiGo, reportedly received approval from the Indian Government to purchase 150 aircraft over the next two to three years to be used on international services. The carrier will have completed five years of operations in Aug-2011 making it eligible to launch international services.

Meanwhile, Skymark shares soared 6.0% yesterday. The carrier witnessed a 35% jump in domestic passenger numbers over the peak summer vacation period, between 06-Aug-2010 and 15-Aug-2010, to 129,489 passengers, despite overall passenger numbers slipping 1% to 2.7 million. 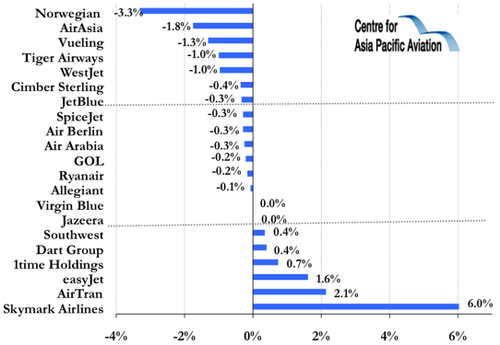