The AirAsia branded airlines, through their various entities, are resuming expansion in Australia and re-entering New Zealand with a new fifth freedom route connecting the Gold Coast with Auckland. Gold Coast-Auckland is a much bigger market, and less risky option, than the Kuala Lumpur-Christchurch route that AirAsia dropped in 2012, ending a highly unprofitable one year foray in the New Zealand market.

AirAsia cut back significantly in Australia in early 2015, erasing an earlier nearly 100% increase in seat capacity in the Malaysia-Australia market, which led to yield declines and heavy losses. Following the Gold Coast-Auckland launch, AirAsia will again be close to 2014 capacity levels in Australia, but with a much more rational approach, relying less on Malaysia.

AirAsia’s new, more balanced Australia operation with four routes from Australia to Malaysia, four to Indonesia, and one to New Zealand, gives the LCC group a stronger and more viable position in a strategically important market. Australia could potentially be subject to further expansion from AirAsia, but this is not likely to be in the Malaysia-Australia market.

On 12-Jan-2016 AirAsia announced the extension of MAAX’s daily Kuala Lumpur-Gold Coast flight to Auckland in New Zealand, from 22-Mar-2016. This will give AirAsia 94 weekly return flights and 59,844 weekly seats in the Australian market during peak periods, and at least 82 weekly flights and 50,796 seats during the rest of the year.

AirAsia steadily expanded in the Australian market until late 2014, starting from late 2007, when the group launched its first Australian route (Kuala Lumpur-Gold Coast). However, after maintaining about 55,000 weekly seats throughout 2014 and briefly surpassing 56,000 weekly seats in Jan-2016, the group responded to challenging market conditions in Australia by slashing capacity.

AirAsia will account for a 5.8% share of total international seat capacity in Australia in May-2016. It will be the fourth largest foreign airline brand in the Australian market behind Emirates and Singapore Airlines, overtaking Air New Zealand. AirAsia is already the second largest LCC brand in the Australian international market after Jetstar, which will have about 30,000 more weekly seats in May-2016.

Notes: *foreign brand
AirAsia seat figure is exact; all others are approximate
seat capacity based on schedules for week commencing 9-May-2016
Source: CAPA - Centre for Aviation & OAG

AirAsia in May-2016 will still be slightly smaller in Australia than it was in May-2014. But the group will have a much more diverse Australian network, with nine routes in May-2016, compared with seven in May-2014.

Of the seven AirAsia routes to Australia operated in 2014, one has been suspended – Kuala Lumpur to Adelaide – and four have experienced reductions: Kuala Lumpur to Melbourne, Perth and Sydney and Bali to Perth. Only Kuala Lumpur-Gold Coast and Bali-Darwin, by far the smallest of AirAsia’s Australia routes, will have the same capacity in 2016.

Gold Coast-Auckland will be third Australia route that AirAsia has launched in just over one year. IAAX launched Bali-Melbourne in Mar-2015, and added Bali-Sydney in Oct-2015. Both have been operated since shortly after their launch with five weekly flights, a schedule that AirAsia plans to maintain throughout 2016.

MAAX plans to maintain Malaysia-Australia capacity at roughly the same reduced levels it has been offering since the cuts were implemented in Mar-2014, operating 37 weekly flights in the Malaysia-Australia market in May-2016, an increase of only 8% compared with May-2015.

MAAX currently has 49 weekly flights to Australia, but this schedule only runs for the peak months of December and January. The shoulder months of February, March and April feature 41 to 43 weekly flights.

In 2014 MAAX maintained 57 weekly flights for virtually the entire year. This included year-round double daily services to Melbourne, Perth and Sydney, a daily service to the Gold Coast, and five weekly flights to Adelaide (which was launched in Oct-2013). 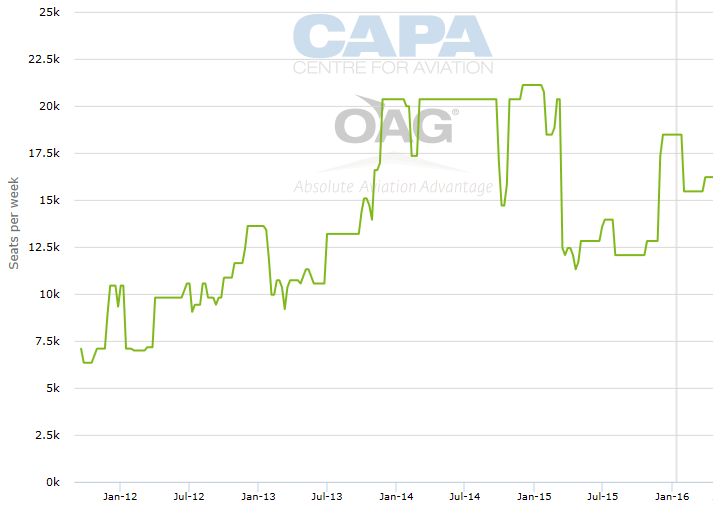 Adelaide was briefly upgraded to daily at the end of 2014, and in early 2015, before being dropped entirely in Mar-2015. AirAsia concluded that Adelaide was too small, and realised that the Melbourne, Perth and Sydney markets could not support two daily flights on a year-round basis.

With the 57 weekly year-round flights AirAsia had to be more aggressive with fares in the local Australia-Malaysia market, and increase reliance on highly competitive sixth freedom markets. In particular, AirAsia pushed connections from China to all its Australian gateways after adding capacity to Australia in 2H2013, but was then impacted by rapid expansion by Chinese carriers in the Australian market.

Even after Malaysia Airlines also decided to cut capacity on the Kuala Lumpur to Melbourne, Perth and Sydney routes from Aug-2015, AirAsia decided against restoring double daily year-round flights in these markets.

AirAsia X could pursue further expansion in the Gold Coast

AirAsia X reduced Kuala Lumpur-Gold Coast to five weekly flights during the off peak periods in 2015, but now plans to maintain a daily year round flight on the route as the operation is extended to Auckland.

But IAAX could reconsider a Gold Coast-Bali route, as AirAsia is now essentially turning Gold Coast into a mini-hub. IAAX was looking at serving Auckland non-stop, but Bali-Gold Coast-Auckland could be a more viable option. Passengers originating in Bali could either transfer onto MAAX’s new Gold Coast-Auckland flight, or IAAX could potentially operate a second Gold Coast-Auckland frequency, particularly if the first frequency proves successful. Another option would be for IAAX to operate from Gold Coast to another city in New Zealand, resulting in a scissor hub.

Gold Coast-New Zealand is a logical AirAsia route that poses less of a risk than a non-stop flight from New Zealand to Malaysia. Australia-New Zealand is a much larger market than Malaysia-New Zealand, which AirAsia actually served from Apr-2011 to May-2012, with four weekly Kuala Lumpur-Christchurch flights.

Kuala Lumpur-Christchurch quickly proved to be too small to be sustainable, particular in the aftermath of the Feb-2011 Christchurch earthquake. Kuala Lumpur-Auckland is a larger market that AirAsia considered serving non-stop in the last year, but after Malaysia Airlines decided against dropping or even reducing Auckland in its network restructuring exercise, AirAsia wisely decided to focus on serving Auckland via Gold Coast, instead.

The Gold Coast-Auckland route is currently served with 20 weekly narrowbody flights, including eight from Jetstar, seven from Virgin Australia and five from Air New Zealand. There are currently about 7,000 weekly seats on the route but capacity varies depending on the time of year. 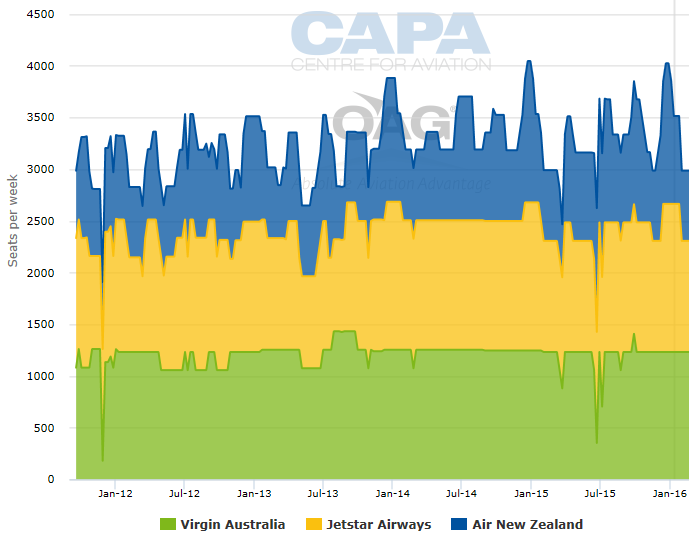 Gold Coast-Auckland is currently the tenth largest Australia-New Zealand route, based on seat capacity, for the week commencing 11-Jan-2016. It will become the fifth largest in Apr-2016 after AirAsia X enters.

Gold Coast-Auckland will be the largest Australia-New Zealand route not served by Emirates. This is an important feature of the route, as Emirates operates large widebody aircraft across the Tasman at a relatively low cost base – utilising aircraft which would otherwise sit idle for several hours in Brisbane, Melbourne and Sydney.

Emirates currently operates daily A380 flights to Auckland from Brisbane, Melbourne and Sydney and also operates one daily 777-300ER flight on Sydney-Christchurch, which is currently the fourth largest route between Australia and New Zealand.

New destinations in Australia from AirAsia’s main Kuala Lumpur hub are unlikely at this point, but AirAsia should be keen to continue diversifying its Australian operation. More new routes from Bali, more fifth freedom routes to New Zealand, and new flights from Bangkok by affiliate Thai AirAsia X, would enable the group to continue growing in Australia without having to rely on resuming Malaysia-Australia expansion.

Gold Coast-Auckland represents a new phase in AirAsia’s Australia strategy which could lead to other fifth freedom Australia-New Zealand routes.

Gold Coast-Auckland is also strategically important, as it again gives AirAsia a presence in New Zealand, an international market remarkably only served by one LCC at this stage.