AirAsia should see a surge in transfer traffic over the next several months as it introduces and expands its Fly-Thru transit product at additional hubs. AirAsia is evolving to become more like a network carrier, following other Asian LCC groups which have been promoting and selling connections for several years.

Bangkok Don Mueang in late 2013 became the second hub for AirAsia’s Fly-Thru product, which was initially introduced at Kuala Lumpur in 2010.

AirAsia introduced the transit product at Jakarta in Sep-2014 and is planning to extend Fly-Thru to Bali and Kota Kinabalu by the end of 2014.

The launch of long-haul affiliates in Indonesia and Thailand is driving much of the growth. But there is also growing demand for short-haul to short-haul connections.

Including self-connections, transit accounts for roughly 10% of total AirAsia traffic

AirAsia and AirAsia X flew 1.45 million passengers in 1H2014 through its Fly-Thru transit programme and is on pace to exceed 3 million for the full year. But there are still huge opportunities for further growth as Fly-Thru accounted for less than 6% of the 24.9 million total passengers carried by AirAsia, AirAsia X and their affiliates in 1H2014.

When including self-connecting passengers the transit portion is roughly 10%, also an indication there is still a lot of room for growth.

So far most of the transit traffic been generated by Malaysian long-haul LCC AirAsia X. The Fly-Thru product was initially launched in 2010 as AirAsia recognised the importance of short-haul feed in establishing a viable long-haul low-cost model.

AirAsia X launched services in 2007 and in its first three years relied heavily on self-connections as passengers booked themselves onto connecting AirAsia short-haul flights at Kuala Lumpur. AirAsia X also noticed a significant number of self-connections to other carriers, particularly in Europe before it dropped London and Paris services in early 2012.

AirAsia X has more than doubled its transit traffic portion since Fly-Thru, which provides a through check-in service for a fee, was introduced. When relying on self-connections AirAsia X only saw about 20% of its total traffic transfer to other flights operated by AirAsia X or other AirAsia carriers (excludes self-connections to other airlines as these cannot be tracked). 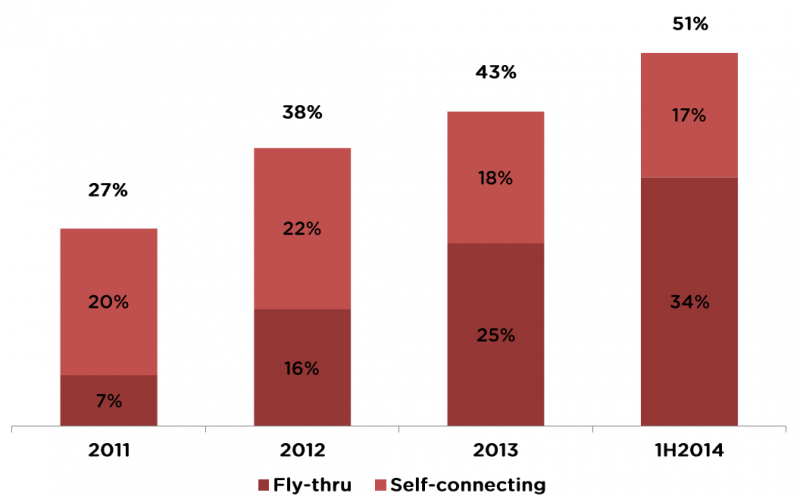 The AirAsia Group consists of short-haul subsidiary Malaysia AirAsia and four short-haul affiliates – Thai AirAsia, Indonesia AirAsia, Philippines AirAsia and AirAsia India. While the Fly-Thru product was only available in Kuala Lumpur and Bangkok in 1H2014, Indonesia AirAsia and Philippines AirAsia flights to Kuala Lumpur and Bangkok have been available under the Fly-Thru programme. (AirAsia India only commenced operations in Jun-2014 and does net yet participate in Fly-Thru.)

The above estimate assumes about 34% of AirAsia X passengers connected onto AirAsia short-haul flights, including 23% buying Fly-Thru and 11% opting for self-connections. This is based on actual figures for 2013 and projections for 2014. AirAsia X reported 34% of its total traffic connected onto AirAsia short-haul flights in both 2012 and 2013, including Fly-Thru and self-connecting.

The portion of AirAsia X passengers connecting onto AirAsia short-haul flights has not grown over the last year and is expected to remain flat as the growth in AirAsia X’s overall transit portion is being driven by AirAsia X-AirAsia X expansion. The number of AirAsia X-AirAsia X connecting passengers has surged over the last year as AirAsia X has added second daily frequencies on several routes, opening up dozens of new city pairs, particularly between Australia and North Asia.

CAPA has outlined in prior reports the rapid rise in AirAsia X transit traffic and the opportunities for further growth. AirAsia X’s adoption of a low-cost network model has huge potential repercussions for the full-service sector throughout Asia-Pacific as hundreds of city pairs which have been dominated by flag carriers start to get new low-cost options.

AirAsia X will continue to grow its transit passenger numbers as it expands. It is hard imagine the overall portion of transit passengers increasing significantly beyond the current 51% as this is already a high figure even for full-service carriers. But even without further growth in the ratio the volumes will increase exponentially as AirAsia X is planning to quadruple the size of its fleet (to about 100 aircraft) over the next 10 years.

Most of AirAsia X’s transit passenger growth over the next few years will likely be recorded in Bangkok and Bali as most of the group’s aircraft slated to be delivered in 2015 and 2016 have been allocated to its new affiliates in Thailand and Indonesia.

Thai AirAsia X (TAAX) launched scheduled services in Jun-2014 and is currently operating two A330s from its Bangkok Don Mueang base to Osaka, Tokyo Narita and Seoul. Indonesia AirAsia is expected to launch scheduled services by the end of 2014 from its base on the popular resort island of Bali to Melbourne and Sydney.

AirAsia is now working to have the Fly-Thru product in place at Bali in time for the launch of Indonesia AirAsia X (IAAX).

The decision to introduce Fly-Thru at Don Mueang in Dec-2013 was driven in part by the planned launch of TAAX. Thai AirAsia has stated that it expects TAAX to generate an incremental load factor improvement of 1 to 2pps across its short-haul operation.

The other main driver was political instability in Bangkok, which impacted inbound visitor demand at the Thai capital. As Thailand’s other tourists destinations were not impacted, Fly-Thru helped Thai AirAsia mitigate the impact of the unrest as it was able to offer domestic connections to passengers arriving on its international flights.

Thai AirAsia currently serves 15 domestic and more than 20 international destinations from Don Mueang. It is the airport’s largest carrier with about 48% of seat capacity. When including other AirAsia short-haul carriers and TAAX, the AirAsia X brand accounts for about 55% of seat capacity at Don Mueang. 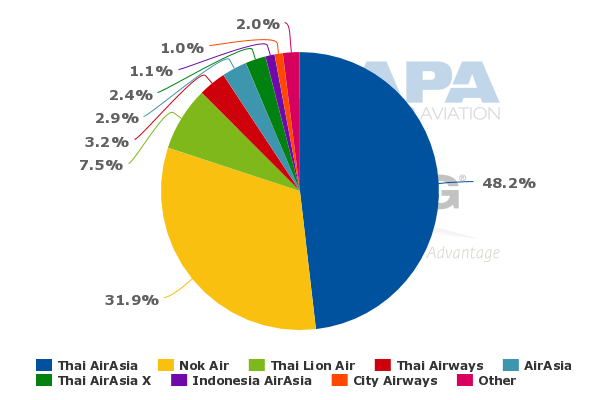 Transit opportunities could enable faster growth for AirAsia at Bali

AirAsia is smaller at Bali, where it currently accounts for about a 16% share of seat capacity. This includes a 14% share for Indonesia AirAsia.

But there are still several connection opportunities as Indonesia AirAsia operates four domestic and five international routes from Denpasar. 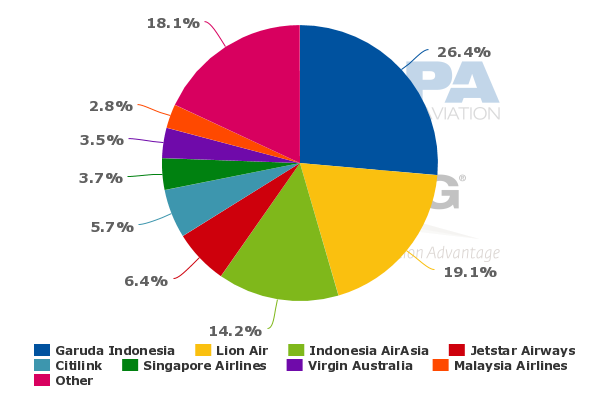 Indonesia AirAsia will offer both short-haul to short-haul connections at Bali as well as connections to IAAX. The new long-haul operation and the associated transit traffic will likely be the main drivers of growth for AirAsia at Bali.

While Bali is a very popular inbound destination it is a limited outbound market. Connections to bigger Indonesian cities (as well as to cities in neighbouring countries) where there is more outbound demand will help IAAX balance its traffic mix.

Indonesia AirAsia is now working with airport authorities in Bali to introduce Fly-Thru and is confident the transit product will be in place by the end of 2014. International to international connections should be relatively seamless, matching the experience at Kuala Lumpur and Bangkok. But international-domestic connections will require longer connection times and a transfer of terminals.

Bali is Indonesia AirAsia’s second largest base after Jakarta. Indonesia AirAsia began offering the Fly-Thru product at Jakarta in Sep-2014. AirAsia domestic and international flights at Jakarta both operate at Terminal 3, a small terminal used primarily by AirAsia, making for relatively easy connections.

Lion’s low-cost network model has been hugely success in Indonesia’s domestic market, where it is now the market leader by a wide margin. Offering connections is essential given Indonesia’s vast geography while low fares are needed to stimulate demand as most of the market is price sensitive.

Indonesia AirAsia should be able to improve load factors and yields by matching Lion in domestic city pairs such as Bali-Medan. Bali and Medan are the third and fifth largest airports in Indonesia but rather incredibly are not connected with any non-stop flights. Bali-Medan is one of several city pairs Indonesia AirAsia introduced in Sept-2014 as it rolled out the Fly-Thru product at Jakarta.

Like Jakarta, there are currently no plans to establish an AirAsia X base at Kota Kinabalu. (IAAX had looked at establishing a base at Jakarta but slot restrictions and a desire not to split its operation between two hubs led to its decision to at least initially focus only on Bali.)

The AirAsia Group overall has about a 50% share of total seat capacity at Kota Kinabalu, including a 49% share for Malaysia AirAsia. 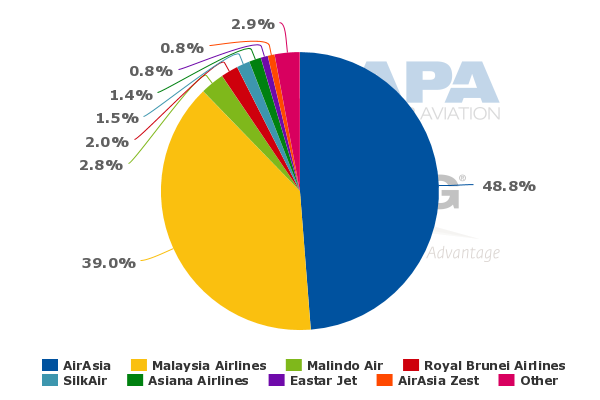 Kota Kinabalu is located in east Malaysia, making it an ideal connection point for flights from North Asia to Southeast Asia. AirAsia currently serves five cities in greater China from Kota Kinabalu – Guangzhou, Hangzhou, Hong Kong, Shenzhen and Taipei. All these destinations are also served by AirAsia or AirAsia X from Kuala Lumpur but the flight times from Kota Kinabalu are one to two hours shorter.

AirAsia will be able to offer connections via Kota Kinabalu between Greater China and several destinations throughout Malaysia as well as Bali, Jakarta and Singapore. Load factors on Kota Kinabalu routes will likely improve and there could be enough incremental traffic to justify more capacity on existing routes as well as potentially new routes which would not be sustainable without transit traffic.

The use of Fly-Thru to grow traffic at Kota Kinabalu is a prime example of how AirAsia is evolving its model with potential huge ramifications for the industry in Asia. It shows the AirAsia model is increasingly becoming more network focused and this evolution is not limited to its long-haul operation.

Over the last year AirAsia also has adopted origin and destination pricing, replacing its original sum of sectors approach for connecting itineraries, and adjusted its revenue management practices to promote transfer traffic across both the short-haul and long-haul operations. (While AirAsia Group and AirAsia X are separate companies they share a website, booking engine and revenue management team.)

AirAsia also has evolved its distribution strategy by partnering with online travel agents, particularly in China, and global distribution system providers. These channels along with a change in pricing strategy have helped push up transit volume in markets that it would struggle to penetrate relying entirely on its own website and sum of sector pricing.

Meanwhile, the move from the LCCT to KLIA2 in May-2014 enabled AirAsia to focus even more on transit traffic as the facilities at its main hub have significantly improved. KLIA2 has been designed for transit traffic while AirAsia and Malaysia Airports had to make less than ideal changes to the congested LCCT to support the Fly-Thru product.

Unlike LCCT, KLIA2 also has airside lounges, providing AirAsia X premium passengers a much better transit experience. Economy class passengers are able to access the lounge on a fee basis.

The LCC transit traffic movement has only just begun

There are huge opportunities for LCC transit traffic at KLIA and Don Mueang as both airports are among the three largest LCC airports in Asia.

Only Jakarta currently has more LCC capacity but Jakarta already has a much higher portion of LCC transit traffic due to the network model and domestic focus at Indonesian market leader Lion.

As CAPA has previously outlined, Singapore and Manila are also poised to see increases in transit traffic, driven by Tigerair and Scoot at Singapore Changi and by Cebu Pacific Air at Manila. Scoot also recently started to connect at Bangkok Don Mueang with partner Nok Air ahead of the launch of new long-haul joint venture NokScoot.

So far Asia’s LCCs are just scratching the surface when it comes to transit traffic. The portion of transit traffic in the overall sector remains very low, as the AirAsia Group figures from 1H2014 indicate.

But the strategy is now place to generate more significant transit traffic volumes, particularly at AirAsia. This will almost certainly change the competitive landscape in Asia-Pacific as full-service carriers have to contend with new LCC competition across a much wider range of short-haul and medium-haul city pairs.