Air Transat offers little clarity of when its, and parent company's, fortunes will turn

Hopes by Canadian tour operator Transat of a return to profitability during 2012 are quickly diminishing as the carrier during the first half of the year racked up a net loss of CAD43 million (USD41 million) driven by a fiscal 2Q loss that resulted from challenges created in the Canadian “sun destinations” from overcapacity and competitive pricing pressure. Heading into the busy summer travel season the bulk of capacity operated by Transat subsidiary Air Transat is being deployed to Europe, where market conditions are highly uncertain due to the continent’s economic turmoil. Transat management is warning that turning around the losses incurred during the last six months will be difficult, but the company has managed to gain concessions from pilots and flights attendants in the form of three-year wage freezes and expects mechanics to endorse the scheme.

Even though Transat is likely to post a loss in 2012 after incurring a CAD12.2 million (USD12 million) loss in 2011, the company does expect to achieve its previously stated goal of improving pre-tax earnings this year by CAD20 million (USD20 million).

The target is part of a three-year programme to improve those results by up to CAD50 million (USD49 million) in 2014 through revenue improvements and cost-cutting schemes.

Transat faced a tough operating environment during winter 2012 as it focused the majority of its business during that time period on sun destination packages to Mexico and the Caribbean that are targeted to Canadian travellers opting to holiday in the winter season. Capacity in those markets was 4% higher year-on-year during Transat’s 2Q2012, the three months to 30-Apr-2012. Transat was a major contributor to the capacity increase as its supply grew 2% year-over-year.

Beginning in mid-March competitive pricing fell rapidly to low levels, Transat management recently explained during an earnings discussion with analysts. Transat refrained from participating in the competitive pricing action, which pressured load factors. In assessing the situation company executives admitted, “It is always difficult between price and load factor, which do you choose?”

Despite posting a healthy 13% gain in revenue from its tour operations in the Americas during the quarter, Transat’s expenses grew at a faster 16% clip, which coupled with the competitive pricing pressure resulted in a CAD20 million (USD20 million) operating loss for the company in that business segment.

Canadian low-cost carrier WestJet also highlighted intense competition in the tour operator space during its 1Q2012, the three months to 31-Mar-2012. The company explained its WestJet Vacation business segment recorded year-over-year improvements in non-air revenue, but stated it only increased the average sale of its vacation packages modestly year-over-year.

Transat also recorded operating losses in its European operations during 2Q2012 of CAD7 million (USD7 million) partially due to translating a 3.7% rise in revenue from Euros into Canadian dollars. Transat has business units in the UK and France and offers travel packages to 12 European countries. During 2Q2012 Transat management cited challenging market conditions in the slow season in France, and also remarked that unrest in North Africa affected the company’s results during 2Q2011 and continues to have an impact on its medium-haul sales. The company’s traveller volumes fell 10% during 2Q2012 and 10% for the first half of the year.

Heading into the high season for its trans-Atlantic markets from Canada, Transat is taking a conservative approach to its capacity, and estimates a 4% year-over-year decline between May-2012 and Oct-2012. The restraint appears to be bearing fruit as Transat estimates so far that load factors and pricing in its trans-Atlantic markets are up sightly year-over-year. Still, the company’s exposure to Western Europe and its tenuous economic state is significant as 91% of Air Transat’s seat capacity is deployed to the region. But the capacity reductions Transat has taken should help to create a more favourable supply-demand balance to blunt some of the demand erosion that could occur as the high season progresses. The company’s capacity to sun destinations during the 2012 summer season is falling by 13% year-over-year. 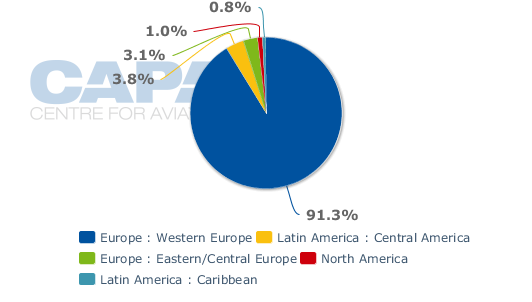 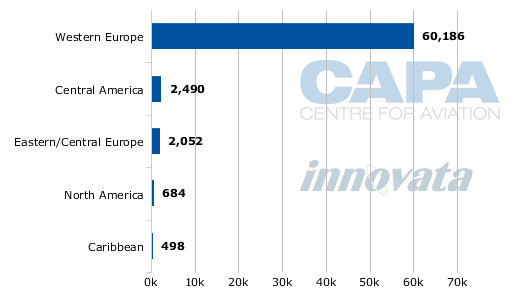 Transat also appears to be taking steps to combat the pressure it experienced in the Canadian sun markets during winter 2012. During the same time period in 2013 it plans capacity cuts, but is still working to determine its final levels of supply. The company does plan to eliminate 12 routes and add five new markets during the winter timeframe.

Transat subsidiary Air Transat operates 12 A330 and 11 A310 widebody aircraft. The nature of its business as a tour operator results in a different service pattern, and as a result Transat does not take the same approach to fleet management as traditional network carriers. Recently the company explained during the winter months its schedule dictates a higher number of narrowbodies for medium-haul sun destinations, and Transat currently partners with Canjet on the operation of smaller aircraft. During the summer high season, Transat requires a higher number of widebody jets to operate on its trans-Atlantic routes.

Due to its higher concentration of narrowbody operations during the winter months, Transat is working to identify new partnerships for sub-contracting its widebody aircraft during that time. It plans to sublease five aircraft to Garuda Indonesia beginning in September and a single aircraft to XL Airways France. Transat management stated the company is still working on subleasing deals for a couple of additional aircraft.
Transat has embarked on a refurbishment project on its A330s that entails adding 12 economy seats to replace nine of its “Club” seats, which could make the aircraft more attractive to possible lessors.

Transat has secured concessions from the Air Transat labour groups as its 400-plus pilots and 1800 flight attendants have agreed to three year wage freezes that the company has pledged to pay back in Dec-2015. The company’s mechanics are voting on a similar proposal.

But the labour agreements are not enough to return Transat to profitability as management declined to offer any definitive timeframe of when its fortunes could be reversed. With so much of its revenue derived from price sensitive leisure travellers, Transat is highly susceptible to a fall-off in leisure demand as the global economy weakens. The company has said it is considering diversifying into Asia, but ramping up new operations in the region will take time and expense Transat currently cannot spare as it works to make significant improvements in pre-tax earnings. In the short term, the company is hoping pricing and demand in its typically lucrative trans-Atlantic market holds throughout the remainder of the high season. But the inevitability of a third straight year of losses is growing as the company has cautioned some time is required to execute its turnaround.