Air NZ enjoys a monopoly on the Pacific, but potential competitors are circling

Air New Zealand has enjoyed a monopoly on the New Zealand to North American route since Qantas pulled out of the Auckland-Los Angeles route in May-2012 (which originated in Sydney). Since then Air NZ has increased capacity, in part to fill the void left by Qantas, but also in response to the strong growth in United States visitors to New Zealand and the recovering US economy.

A growing market with a single player would normally be expected to quickly attract a competitor, and to the extent that Hawaiian Airlines began flying between Honolulu and Auckland in Mar-2013, that has happened. Part of Hawaiian Airlines’ proposition is that Honolulu can serve as an alternative and less stressful transit point to its US destinations beyond the more congested west coast gateways of Los Angeles and San Francisco.

There is speculation that Qantas' oneworld partner American Airlines is considering establishing a direct Los Angeles-Auckland service within the next two years. American is reconfiguring its 777-200ER fleet with higher density two class capacity which could be suitable for a route that is dominated by leisure travellers.

Air New Zealand routes from Auckland to the United Sates, ranked by frequencies: 1-Jul-2013 to 7-Jul-2013

One of the daily Los Angeles frequencies carries on to London as Air New Zealand’s flagship route. On the remaining Auckland and Los Angeles point to point services Air NZ codeshares with fellow North American Star Alliance members United, Air Canada as well as Lufthansa, Turkish Airways and US Airways. 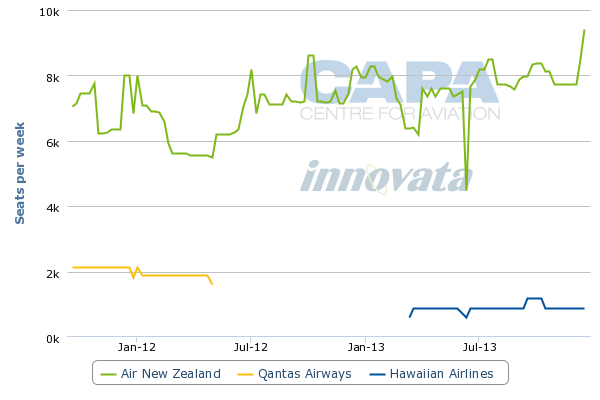 The trans-Pacific routes to New Zealand from North America are long and thin and have historically proven to be difficult for US carriers when competing against a strong home market carrier such as Air NZ.

United Airlines was the last US carrier to operate the route direct, pulling out in 2003 in favour of a codeshare agreement with Air NZ. In return Air NZ withdrew from its unprofitable Sydney-Los Angeles route, where it competed with United.

United’s services to the much larger Australian market, where it flies daily to Sydney from Los Angeles and San Francisco, suffer from low demand at certain times of the year in the very seasonal market. The Los Angeles service continues on to Melbourne with connecting traffic only.

United Airlines abandoned plans to launch a Houston-Auckland service using its first 787-8 aircraft, citing a decision by Houston to allow international operations from Hobby Airport in competition to United’s hub at Houston Intercontinental. More likely, however, was that the service (originally announced by merger partner Continenta) fell out of favour as the group’s focus shifted to replacing older aircraft with the 787-8 rather than opening new routes.

Air NZ had given a lukewarm reception to the new competitor, but quickly moved to evaluate options to add capacity to the United States by either adding new destinations or frequencies to existing services in the wake of the United decision not to proceed.

Auckland International Airport had expected the United service - with an expected Air NZ codeshare - to attract at least 100,000 passengers in the first year. If correct, that demand figure would suggest that, in the absence of foreign competition, Air NZ could operate the route with an average four times weekly 787-9 service, based on an 80% load factor.

Houston had been on Air NZ's radar as a potential new US destination along with Denver to be served either with 787-9s or with existing equipment. Air NZ will take delivery of another two 777-300ERs, due in 2014 and 2015, to replace the two remaining 747-400s which currently operate to San Francisco, supporting 777-200ER operations.

The importance of the United States market to Air NZ is evident in its latest operating statistics for May-2013 in which it reports a 17.4% increase in RPKs on its North America-UK routes for the month of May compared to a year earlier, while ASKs increased 17.4% over the period, leading to an increase in load factor of 0.1ppt to 82.6%. For the financial year to date the increases were a more modest, but very healthy 7.7% in RPKs and 4.7% in ASKs resulting in load factors rising 2.4ppt to 86.2% on the same period in 2012.

In contrast, the carrier's total long-haul RPKs rose 2.1% in the financial year to date, dragged down by a 6.2% decline for Asia, while ASKs slipped 0.2%.

Air NZ does not break down yields by markets but its overall yield for long-haul operations improved 5.2% in financial year to date, driven by the benefits of restructuring some of the Asian flying as well as adding capacity to the US.

Despite its monopoly position Air NZ does not appear to be extracting a significant premium on fares between Auckland and Los Angeles based on a basic comparison of return fares for travel in the second half of Aug-2013.

Air NZ offers a return fare from New Zealand of USD1,265 on the route which is competitive when compared to fares offered from Sydney to Los Angeles where Qantas, Virgin Australia and their respective partners American Airlines and Delta Air Lines compete with United Airlines.

Qantas is the most expensive at USD1,462, followed by Delta Air Lines offering of USD1,437 which is slightly higher than the US1,435 fare from alliance partner Virgin Australia. United Airlines is the cheapest at USD1,357. It should be noted, however, that the Sydney-Los Angeles flight is up to two hours longer than the journey to Auckland. The Australian services also attract USD158.30 in taxes and surcharges compared to USD97.80 to and from Auckland.

Air NZ’s ability to leverage its monopoly position on the largely price sensitive leisure route may also be restrained to some degree by competition from Pacific Island carriers offering one stop services via Nadi, Papeete and Honolulu.

Relative newcomer Hawaiian Airlines touts its extensive onward connections to mainland US over its Honolulu hub, but the high demand on its services between Honolulu and the US means there is a lack of cheaper fares available on that sector, pushing the total fare up to USD1,320. The lack of same day connection on the return journey also requires an overnight stay, adding extra accommodation expense.

Qantas has never given a specific reason for pulling off the Melbourne-Auckland-Los Angeles route, however it was likely that the A330 was better redeployed on Australian domestic services to combat the growing challenge from Virgin Australia to its corporate market. In addition Qantas’ long-haul network was heavily loss making, though, after the initial impact of near-simultaneous double entry by Virgin and Delta, the trans-Pacific service has recovered - albeit not to the goldmine it had previously delivered.

American and Qantas currently operate on the Pacific under a Joint Business Agreement authorised by the Australian Competition and Consumer Commission in Sep-2011 for a five year period. American stopped flying to Australia in its own right in 1992 in favour of a codeshare agreement on a number of Qantas services, including domestic services in Australia and some Jetstar services in New Zealand.

Air NZ is doing enough to keep competitors at bay, for now

For now Air NZ appears to have done enough to deter the threat of renewed competition on the important trans-Pacific route by moving swiftly to fill any voids.

The carrier has indicated the possibility of flying deeper into the US with the objective of improving access to the east coast. The 787-9 is ideally suited for such missions, allowing for a market to become established before potentially up-gauging to the larger 777-300ER.

But as a warning to any would-be new entrants, the carrier has indicated it could launch a new route with existing equipment ahead of the 787-9.

The trans-Pacific route has always been a challenging route for US airlines, with a litany of entry and exit over the past 20 years. As market conditions change and as new equipment like the 787s and long range 777s come on line, both challenges and opportunities will open up for Air NZ. Manouvering between them will be a crucial test for the New Zealand flag carrier.