Air New Zealand and Virgin Australia have both unveiled plans to add capacity in the Australia-New Zealand market after their joint venture ends on 27-Oct-2018. The two airlines will compete against each other on 11 cross-Tasman routes following the launch of two new routes for each airline.

The Qantas Group, the only other main competitor in the Australia-New Zealand market, will lose market share unless it also decides to pursue strategic expansion. Qantas has already expanded capacity to New Zealand by approximately 25% to fill the void left by three cross-Tasman route suspensions by its partner Emirates.

Air New Zealand and Virgin Australia expand across the Tasman

On 4-Apr-2018 Air New Zealand announced the end of its alliance with Virgin Australia effective 28-Oct-2018. The two airlines have had a revenue-sharing metal neutral joint venture in the Australia-New Zealand market since Nov-2011.

On 9-Apr-2018 Air New Zealand announced the launch of two new Australia routes and additional capacity on five of its existing trans-Tasman routes. Air NZ stated that its trans-Tasman capacity will increase 15% (year-over-year) in Dec-2018.

Air New Zealand’s trans-Tasman network will increase to 16 year-round routes with the Dec-2018 launch of Brisbane to Queenstown and Wellington. These are two of three trans-Tasman routes under the Air NZ-Virgin Australia JV that Virgin Australia now operates alone. Air NZ is unlikely to launch the third Virgin Australia-only route, Brisbane-Dunedin, as it a very small market that is not served by any other airline.

Virgin Australia’s trans-Tasman network will increase to 12 routes following the 28-Oct-2018 launch of Melbourne-Queenstown and Sydney-Wellington. These are two of 12 routes under the Air NZ-Virgin Australia JV that only Air NZ now operates (includes the three seasonal routes).

Air New Zealand operated up to 170 weekly flights to Australia last summer, according to OAG data, however it has more than twice as much capacity as Virgin Australia because several of its trans-Tasman flights are operated with widebody aircraft. Air New Zealand had up to 38,000 weekly one-way seats across the Tasman last summer while Virgin Australia had up to 18,000 weekly one-way seats, based on CAPA and OAG data.

Air New Zealand and Virgin Australia will both likely capture larger market shares next summer as they expand following their divorce.

As the Australia-New Zealand market is very dynamic at the moment it is hard to predict with certainty where the market shares will exactly end up. However, the overall trend will certainly be intensifying competition, leading to lower average fares and faster growth.

See related report from CAPA sister publication Blue Swan: Virgin dumped. And now for war? There will be blood.

Recent reductions at Emirates have already resulted in significant market share shifts across the Tasman – mainly from Emirates to its alliance partner Qantas. Emirates dropped Auckland-Brisbane and Auckland-Melbourne in Mar-2018 and suspended Auckland-Sydney in Jun-2017.

Qantas has added capacity on these routes to fill most of the void. Qantas capacity to Australia is up approximately 25% year-over-year, according to CAPA and OAG data.

The combined Emirates-Jetstar-Qantas share of capacity has therefore dropped slightly, from approximately 45% to 42%. However, the three partners should have been able to maintain their share of traffic in the local market, given that a number of Emirates’ passengers on the three suspended routes continued to Dubai.

Qantas and Jetstar operate alongside each other on five routes, including Sydney-Christchurch. As a result, the Qantas-Jetstar-Emirates grouping competes on 14 trans-Tasman routes, compared to 20 for the Air New Zealand-Virgin Australia JV. 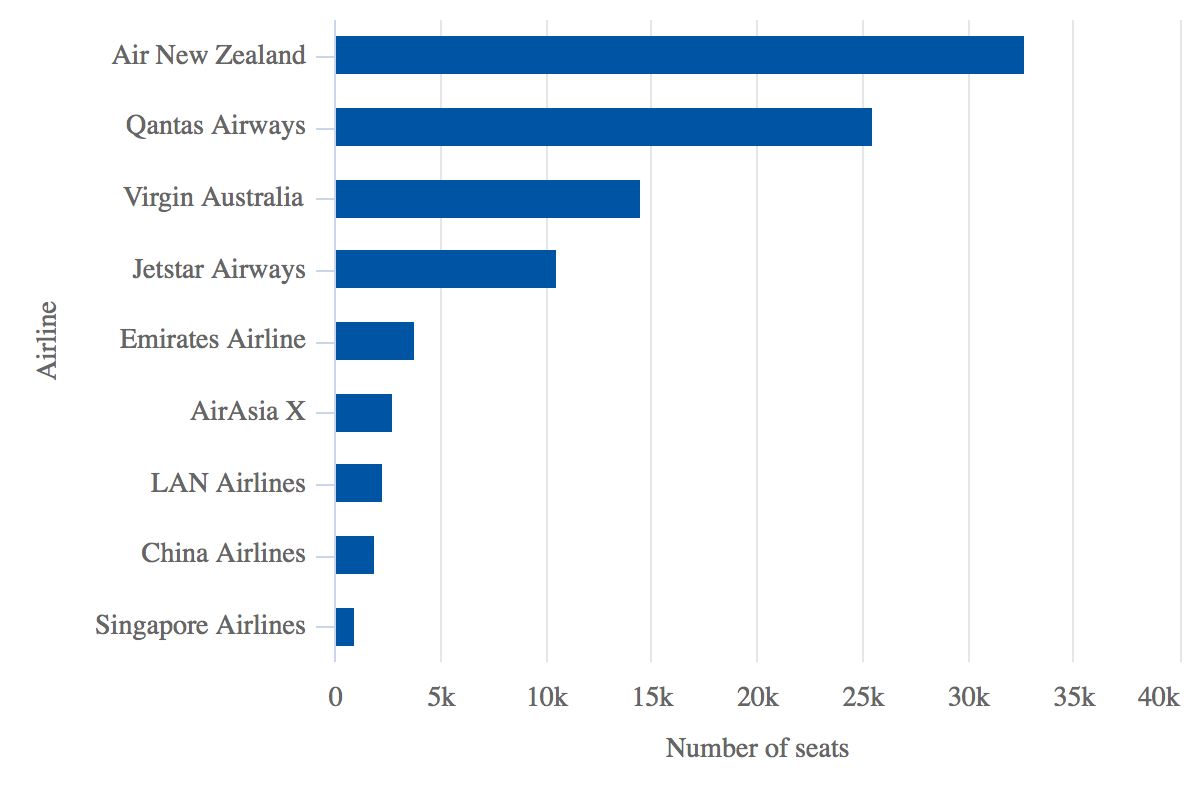 When Jetstar’s 12.4% share is included, the Qantas Group and its alliance partner Emirates controlled almost 43% of the market in FY2017, compared to 52% for the Air New Zealand-Virgin Australia alliance.

The Qantas Group has been trying to maintain its market share across the Tasman in spite of the Emirates cuts. However, its share will inevitably decrease as Air NZ and Virgin Australia expand.

As highlighted earlier in this report, Air NZ's share of capacity will likely reach 37% next summer while Virgin Australia’s share may approach 20%. That would leave approximately a 38% share for Qantas-Jetstar-Emirates.

Air New Zealand could potentially even surpass, on its own, the Qantas-Jetstar-Emirates grouping as it is now contemplating further increases to Australia.

Air NZ is already by far the largest single airline presence in the Australia-New Zealand market and is confident that it is able to compete without a partner. It was Air New Zealand’s decision to not extend the JV with Virgin Australia, which itself would have extended the partnership and is now left in a relatively weak position.

Brisbane will have the largest Air NZ capacity increase, 44%, as Air NZ launches services to Brisbane from Queenstown and Wellington. Air NZ now has a relatively small presence in Brisbane, while Brisbane is the largest gateway for trans-Tasman services for Virgin Australia.

Virgin Australia currently has 40% more seat capacity in the Brisbane-New Zealand market than Air New Zealand. This explains Air NZ’s focus on expanding in Brisbane after the JV with Virgin Australia ends on 27-Oct-2018.

Virgin Australia could partner with SIA on Melbourne-Wellington

SIA could potentially launch more trans-Tasman services, which would benefit Virgin Australia. However, SIA is generally not interested in the trans-Tasman market and it will want to avoid rocking the boat with Air NZ. SIA and Air NZ have been JV partners in the New Zealand-Singapore market for more than three years.  SIA is best off keeping a distance as two of its closest partners battle it out.