Air New Zealand suffered a NZD7 million loss before tax in the second half of its financial year ended 30-Jun-2009 and warned airline sector earnings “will not achieve a satisfactory commercial performance” until supply is aligned with demand. Air New Zealand’s rivals are unlikely to slow their competitive assault on the flag carrier, having made significant market share and revenue gains in recent months.

Under New Zealand IFRS rules, the carrier reported ‘Normalised Earnings before Tax’ of NZD145 million in the full financial year, down 26.4% - a result Chairman John Palmer trumpeted made Air New Zealand “one of the top airline performers globally”. He added, “Air New Zealand’s profitability against the backdrop of a global economic meltdown was underpinned by management’s decision to move rapidly ahead of competitors to reduce capacity at the first signs of waning demand and an ability to continue to invest and innovate with confidence.”

CEO, Rob Fyfe, was more circumspect. He stated while demand is stabilising, “yields remain under significant pressure, fuel prices have resumed an upward trend and we are unlikely to achieve the same level of net hedging gains”. He added, “although there are some early indicators that the slump in travel demand may be showing signs of having bottomed out, it would be naïve to think that there won’t be bumps on the road to economic recovery”.

The full year result was boosted by significant fuel hedging and foreign exchange gains. The underlying figures are troubling – particularly for the second half of the financial year. 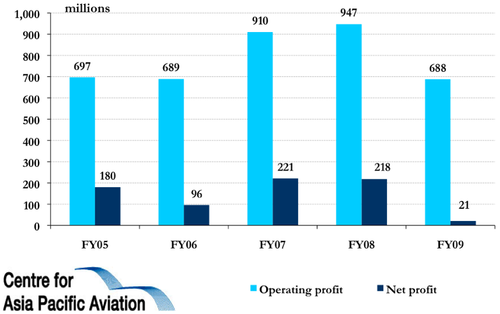 Moreover the underlying airline business turned from a NZD216 million profit before tax in FY2008 to a NZD205 million loss in FY2009. (First and second half breakdowns are not disclosed). 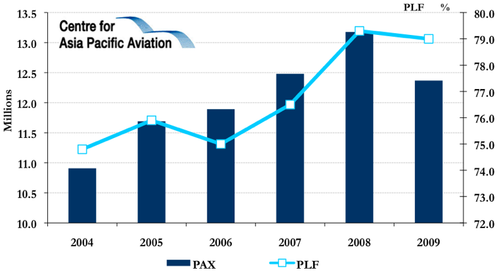 The reason for the airline's downturn is that Air New Zealand’s revenues and yields are collapsing, while costs are rising, despite deep capacity cuts. Here, the second half figures offer useful guidance.

The Group cut capacity (ASKs) by 7.2% last financial year, but its labour costs rose 5.5%, maintenance costs surged 32.4% and aircraft operations costs increased 2.7%. Fuel costs rose 50.4%, including a 31.5% increase in the second half.

Despite this, overall costs rose only 5.4%, thanks to the inclusion of massive foreign exchange gains (NZD366 million). Without this, the bottom line would look very different - but then the airline business is mottled with good and (mostly) bad luck.

Air New Zealand prefers to show this graph of its yield performance, which shows year-to-date movements, as opposed to year-on-year changes, which presents a more healthy story, even accounting for foreign exchange fluctuations. 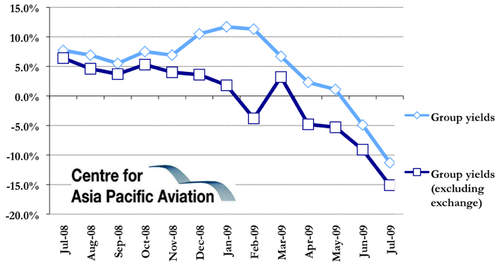 Mr Fyfe stated the airline would continue to act quickly and decisively, with a strong emphasis on innovation, to remain ahead of competitors, but he admitted demand remains difficult to predict.

He added that “some certainty is provided by hedge positions relating to foreign exchange and fuel prices”, but absent a miracle global economic turnaround, Air New Zealand will face difficulty addressing its serious yield falls in the near term, meaning revenues – the company’s lifeblood - will remain under pressure for the foreseeable future.

The airline must also attack its rising cost profile in the next 12 months. Unlike rival Qantas, which aims to take out a further AUD1.5 billion in costs from its business, there was little detail from Air New Zealand on this subject.