Air Namibia, the state-owned national carrier of Namibia has been loss making since inception, but under a new government funded five-year turnaround strategy the carrier is slowly moving towards financial sustainability through investment in new aircraft and improved revenue management systems.

Air Namibia has a long history of government assistance to remain operational. A previous turnaround attempt used nearly NAD2 billion (USD196 million) in government bailout funds between 2003 and 2009. The current plan, which was announced in 2011, is expected to see the carrier break even by 2016 at an expected cost of NAD1.6 billion (USD156.9 million) to the taxpayer.

The carrier also signed its one and only codeshare with Kenya Airways in Jul-2013 covering services between Lusaka and Johannesburg and Windhoek and Nairobi. The partnership provides valuable access to the important East African hub of Nairobi, while also extending Kenya Airways' presence in southern Africa through its strategy of working with smaller African carriers.

Air Namibia operates a network of 17 destinations including Frankfurt

Air Namibia operates a network largely focused on Southern Africa including eight domestic destinations and a similar number of regional points from the nation’s capital, Windhoek, located in the centre of the county. In addition Air Namibia maintains its links with former colonial ruler, Germany through a daily service to Frankfurt as its only intercontinental route.

The carrier deploys the bulk of its capacity by seats to South Africa, which it serves with 6,048 seats per week, split evenly between Johannesburg and Cape Town. Those routes are also Air Namibia’s largest regional routes. Germany accounts for a further 1,946 seats per week, while Angola to the north is served with 1,512 seats per week.

Air Namibia has a monopoly on all but four of its 17 routes from Windhoek with the exceptions being Johannesburg, Cape Town, Luanda and Lusaka-Harare. 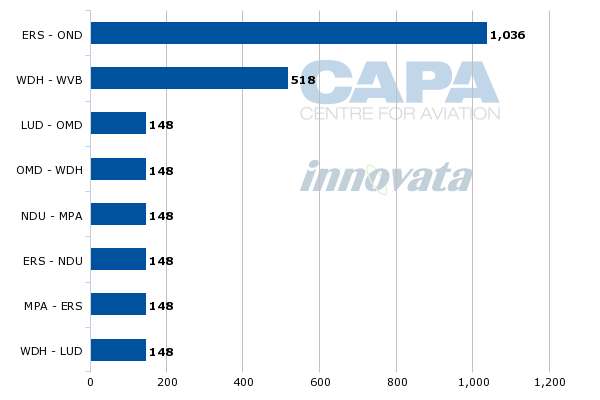 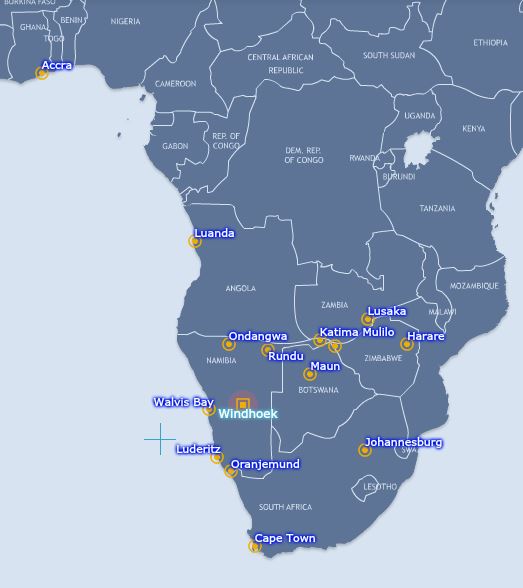 As part of its five-year turnaround plan, Air Namibia completed a rationalisation of its schedule in Mar-2013 to bring capacity into line with demand across its network. The carrier also received a further equity injection from the government in Dec-2012 in the form of two new A319-100 configured with 112 seats in two classes, which have been deployed on regional routes. The aircraft replaced older Boeing 737-500. It is not clear if the aircraft form part of the NAD800 million (USD78.4 million) in government funding of Air Namibia originally budgeted for 2012.

But the government’s patience of funding Air Namibia appears to be wearing thin. Finance Minister, Saara Kuugongelwa-Amadhila in Feb-2013 expressed concern at Air Namibia’s on-going need for financial support from taxpayers. “I must emphasise that the perpetual lifeline extended to Air Namibia is a cause of national concern. A lasting solution is warranted," Ms Kuugongelwa-Amadhila said.

A330-200s will replace A340-300s on Windhoek-Frankfurt, reducing operating costs as well as capacity.

Air Namibia will also take delivery of two new leased A330-200, the first of which is due in Sep-2013 and the second in Nov-2013. The aircraft will replace its existing A340-300 fleet which operate the carrier’s flagship Windhoek-Frankfurt route. The A330-200s will be leased long term from Intrepid Aviation.

Air Namibia has the Frankfurt route to itself which will allow the carrier to maximise the operating cost improvement the new aircraft will deliver along with higher load factors which should lead to improved yields.

Windhoek Hosea Kutako International Airport is the nation’s main gateway, located about 40km east of the city. The airport caters for all regional and intercontinental services as well as three coastal domestic destinations, Walvis Bay, Luderitz and Oranjemund. Hosea Kutako is served by just four carriers; South African Airways, British Airways, TAAG and Air Namibia. In the three months to 31-Mar-2013 the airport handled a total of 166,329 passengers, according to Namibia Airport Company (NAC) figures, suggesting annual passenger numbers in excess of 650,000 passengers per year.

Windhoek has a population of about 323,000, and is experiencing continuous growth and development due to rapid urbanisation. The city is recognised as the capital of southwest Africa and is served by two airports, Hosea Kutako International Airport and Eros Airport.

Namibia is one of the most stable democracies and economies in Africa with a population of 2.2 million and a GDP per capita of USD7,800. The country is benefitting from significant investments in its mining industry which is a key driver of the economy, accounting for 8% of GDP and more than half of 50% of export earnings. 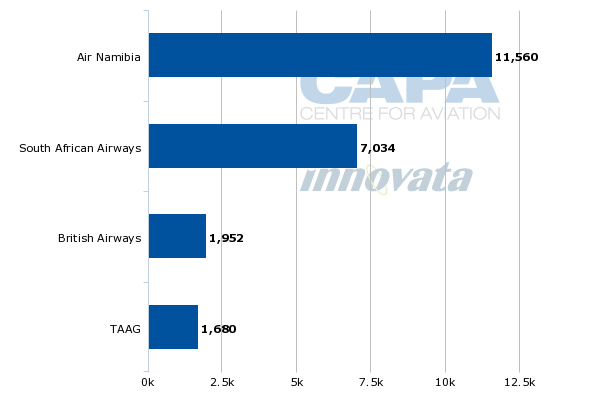 Johannesburg is Hosea Kutako’s most competitive route with three airlines dominated by SAA operating 3,417-one way seats in the week from 19-Aug-2013 to 25-Aug-2013, against 1,512 seats offered by Air Namibia and 976 seats by British Airways.

Air Namibia has increased capacity between Windhoek and Luanda by 37% since Oct-2012 and operates the daily service offering 756 one-way seats per week using an A319. The increase appears to have been in response to TAAG increasing capacity by 360 seats per week to 480 seats per week in three main steps since Mar-2013. 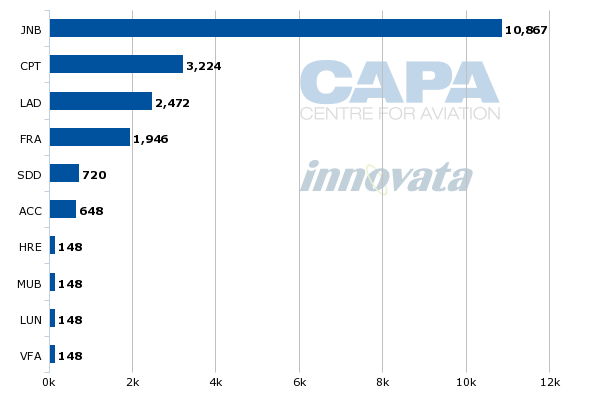 The smaller Windhoek Eros Airport, located 7km south of the city centre serves domestic destinations, including Ondangwa near the border with Angola and Katima Mulilo, nestled between Botswana and Zambia. It is also a base for extensive charter operations.

Ondangwa is Air Namibia’s largest domestic route, with 518 seats per week across double daily frequencies using Embraer ERJ 135 regional jets. The town has a population of just 11,000, but is an important transit point for Owambo contract workers travelling to and from the copper and lead-mining town of Tsumeb, 274km to the southeast.

Air Namibia has been criticised by business passengers for increasing fares between Eros Airport and Ondangwa. But the carrier claimed fares had been kept artificially low since 2010 in order to stimulate demand and “develop a culture of flying in Namibia” after the Beechcraft B1900Ds were replaced with Embraer ERJ-135 regional jets. The 37-seat ERJ 135s almost doubled capacity on the route.

Air Namibia stated in Jun-2013 that demand on the twice daily Eros-Ondangwa service had steadily increased and enjoyed high load factors, but despite this the route had continued to be loss making. “With recent improvements in our revenue management and pricing functions, this route together with many other routes on our network are starting to show commendable improvements.” The carrier said fares had now reached equilibrium with demand and would not increase further.

Air Namibia managing director Theo Namases stated in Jul-2013 that, “as African airlines we need to realise that smart partnerships are the way forward, and the key to sustainability and survival”.

Air Namibia appears to be making gradual headway towards makings its first profit. But in the long term the carrier is likely to come under increased pressure from much larger and better capitalised regional competitors such as Ethiopian Airlines, Kenya Airways and SAA, all of which are pursuing pan-African networks linking the continent to the rest of the world through their respective hubs.

The time may come for the government, which is clearly frustrated at Air Namibia’s on-going need for support funding, to consider forging a closer partnership with one of the large African carriers. Whether there would be interest in investing equity in the carrier - assuming the wherewithal exists is another issue.