This will be Stansted's first ever scheduled nonstop link with India and the only passenger route connecting the Essex airport with Asia. It will also be the only direct flight between Amritsar and any London airport, adding a second UK service from the Punjabi city after its Birmingham service, operated by Air India since Feb-2018.

Air India's new service is a further boost to the UK-India market following the collapse of Jet Airways in Apr-2019. Oct-2019 will also mark Virgin Atlantic's return to the Mumbai-Heathrow market, in competition with British Airways and Air India.

In addition, the UK-India market leader British Airways has added frequencies to its Mumbai-London Heathrow service and Air India has resumed its Amritsar-Birmingham operation.

Much of the capacity gap left by Jet Airways in the UK-India market will have been filled by the end of winter 2019/2020, in spite of there being fewer airlines (although LCC entrants may start to appear). Moreover, the route network is starting to offer more choices.

Before Jet Airways exited the market, it had reached a peak of 33 weekly UK-India frequencies in Mar-2019. This placed it third by frequencies, behind British Airways and Air India (although it was second only to BA on seat capacity).

The reduction was mainly the result of Jet Airways' exit (in Apr-2019), but also reflected some seasonal differences between the winter and summer seasons (TUI Airways and Thomas Cook operated winter-only services to Goa). 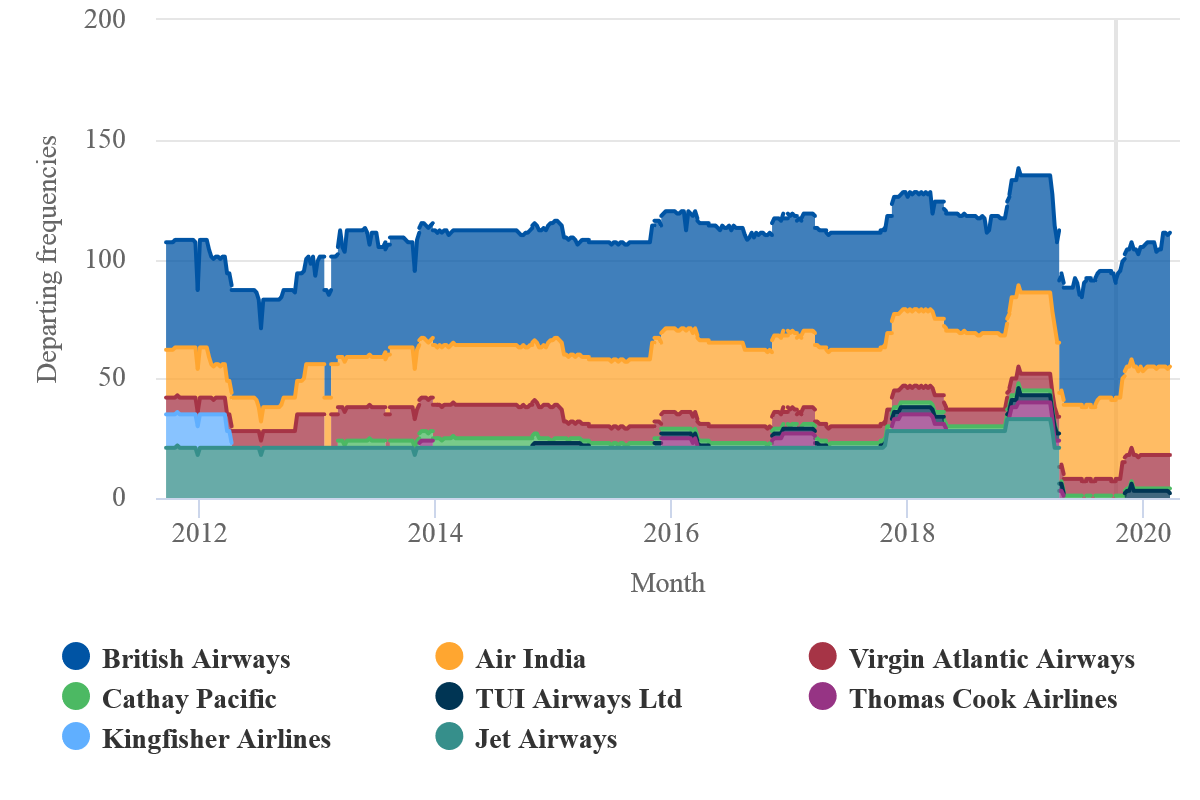 Jet Airways operated to Heathrow from Delhi (seven weekly frequencies) and Mumbai (21 frequencies), and to Manchester from Mumbai (5 frequencies). It was the sole operator on Manchester-Mumbai, a route now no longer in operation, but the two Heathrow routes continue with other competing airlines.

Some of the lost frequencies between the UK and India have been replaced by the other airlines.

Much of this increase, 15 frequencies, will have been driven by the Mumbai-London Heathrow route. British Airways took its frequency from twice daily to 18 times weekly in Jul-2019 and will step up to three times daily in late Mar-2020.

Virgin Atlantic will enter with a daily service at the end of Oct-2019 and Cathay Pacific plans to return to the route with one weekly flight from Mar-2020 (after a year's gap).

Jet Airways had operated a twice daily schedule for many years until increasing its frequency to three times daily at the start of winter 2017/2018. This took the total on the route from 36 to 43 weekly frequencies from then until Mar-2019. After Jet's demise the total fell to 21, but it is due to return to 36 by the end of Mar-2019. 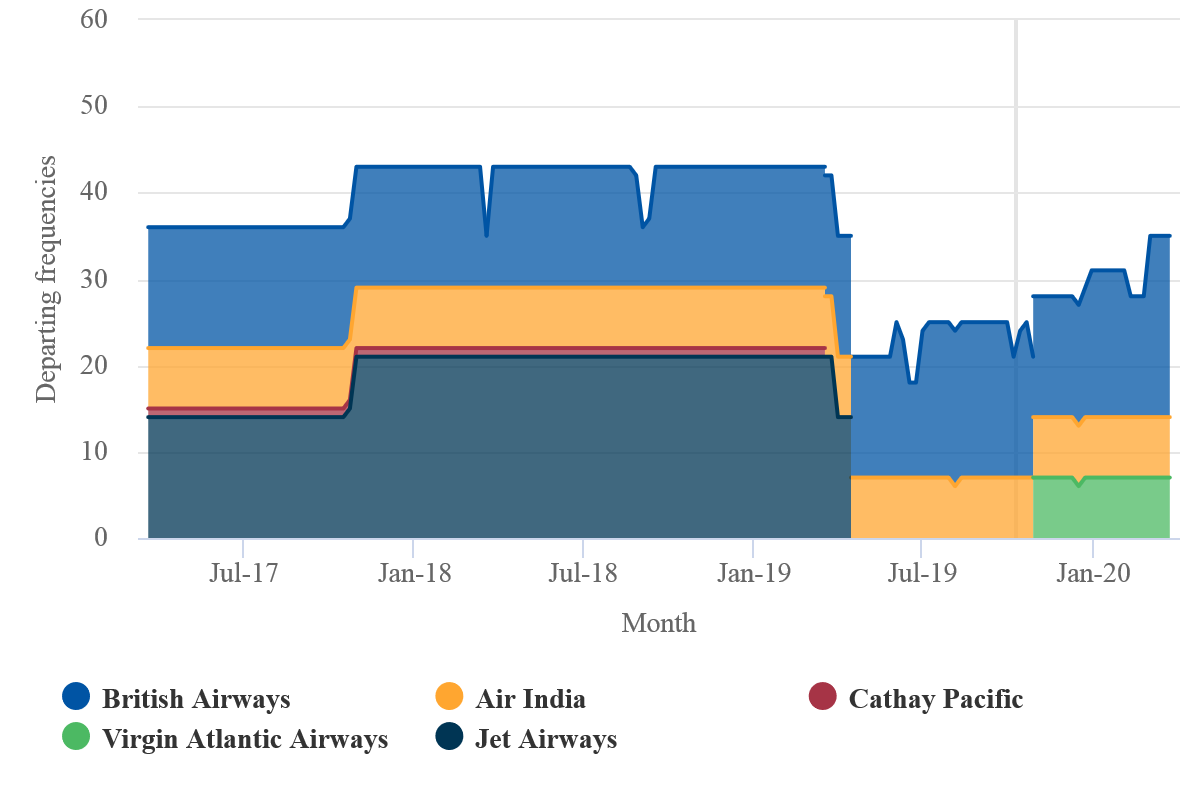 Amritsar to Stansted and Birmingham also restore some UK-India frequencies…

…as do Goa to Gatwick and Manchester

The final two additional frequencies out of the 23 added over this period are due to TUI Airways' resumption of its winter-only flights to Goa from London Gatwick and Manchester.

Following the collapse of Thomas Cook, TUI is set to be the only operator on these two leisure routes this winter. However, Air India reportedly plans a Goa-London service to fill the gap left by Thomas Cook and Stansted could be the logical choice of airport at the London end.

TUI also previously operated between Goa and Birmingham (in winter 2017/2018 and winter 2018/2019), but has discontinued this service.

There are 11 UK-India routes scheduled in Mar-2020

According to data from OAG, there will be 11 routes between the UK and India in the week of 23-Mar-2020 (see table below).

The biggest route by seats in that week of 23-Mar-2020 is Mumbai-Heathrow, with 9,300 seats, compared with 8,900 for number two Delhi-Heathrow, although both have 36 departing frequencies.

Prior to Jet's departure, both had 43 weekly frequencies. Mumbai-Heathrow was hit harder by Jet's demise, but as noted above, after falling to 21 frequencies it will restore parity with Delhi-Heathrow by late Mar-2020.

These two leading routes, together with third ranked Bangalore-Heathrow, are the only competitive routes between the UK and India. All three are served by British Airways and Air India.

Virgin Atlantic also operates on Delhi-Heathrow and is due to enter Mumbai-Heathrow in Oct-2019. Virgin Atlantic previously operated from Heathrow to Mumbai until Jan-2015, when it withdrew in favour of its then codeshare partner Jet Airways.

The schedule for the week of 23-Mar-2020 shows seven routes for Air India, five for BA, two for Virgin and two for TUI Airways.

London Heathrow has six routes and Birmingham has two; Stansted, Gatwick and Manchester have one each.

On the Indian side, Delhi, Amritsar and Goa have two routes, while Mumbai, Bangalore, Hyderabad, Chennai and Ahmedabad have one each.

India's leading low cost airline IndiGo (also India's biggest airline of any kind) has long been considering European routes beyond its Delhi-Istanbul, which was launched in Jul-2019.

It is reported to be planning the launch of a one-stop service from Delhi to London via Tbilisi in Jan-2020, deploying long range A321neo aircraft.

A UK-based low cost long haul start-up, flypop, is planning to serve destinations in India and South Asia (initially Amritsar and Ahmedabad) from London Stansted. Currently in a fund raising phase, it plans to use A330 aircraft in a single cabin configuration.

Air India's Amritsar-Stansted launch preempts flypop, which has been planning since 2016. While this now poses a competitive challenge for when flypop moves to its operational phase, it may also serve to prove the existence of demand on the route.

Before Jet Airways' departure, the last airline to exit the UK-India market was Kingfisher Airlines, which collapsed in Apr-2012. It had approximately 11% of seats in this market, operating on Delhi-Heathrow.

Most of the capacity gap that Kingfisher left was filled by other incumbents within a year, although not all on the route it operated, and total seat numbers were restored within two years. 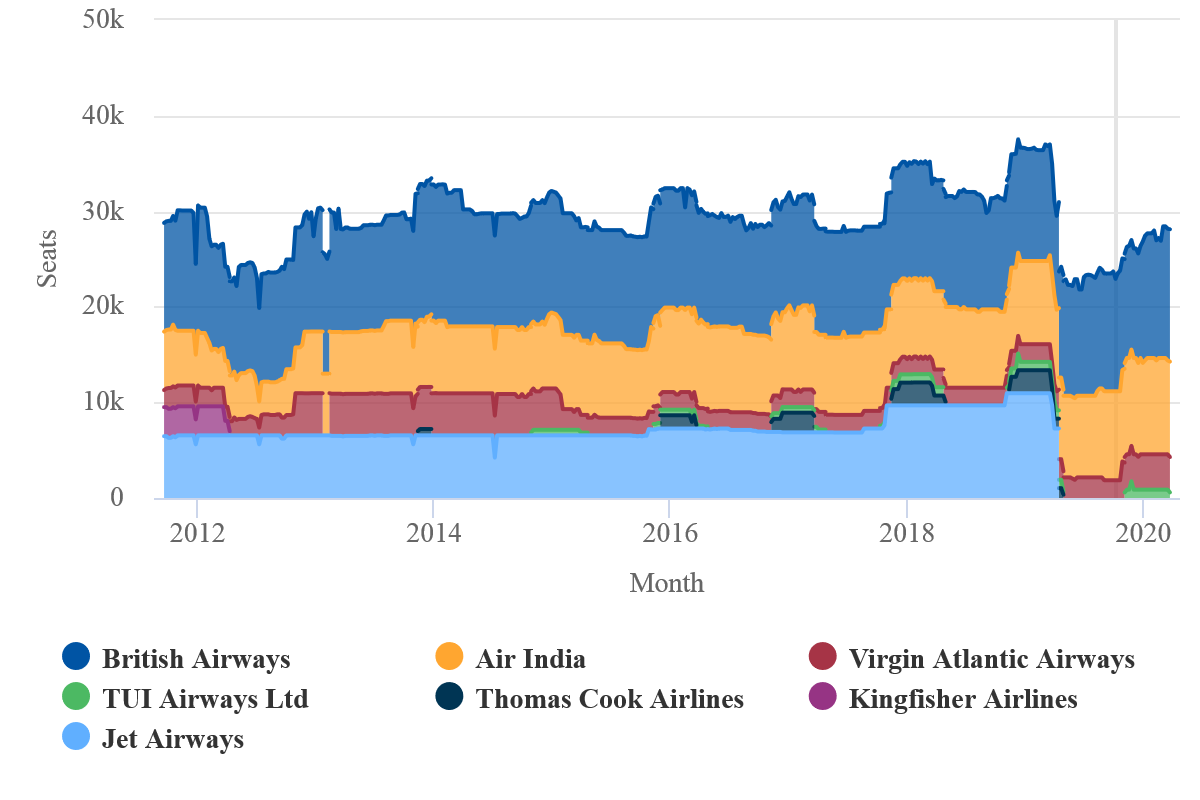 In that time frame, Virgin Atlantic doubled its capacity by entering Mumbai-Heathrow (a route that it later exited and is now re-entering); BA upgauged on Delhi-Heathrow and added frequencies to Chennai and Hyderabad; and Air India restored frequencies it had previously cut on Delhi-Heathrow, as well as launching Delhi-Birmingham (in Aug-2013).

In addition, Goa to Manchester was launched by the new entrant TUI Airways in Nov-2013 (joined by Thomas Cook Airlines a year later).

The (bigger) gap left by Jet Airways is also being filled

Jet Airways had approximately 30% of UK-India seats in the last 12 months of its operation and so, it leaves a bigger gap than that created by Kingfisher's demise seven years earlier.

It also leaves only four nonstop operators in this market – BA, Air India, Virgin Atlantic and TUI Airways, the latter in winter only – and Air India as the only one based in India.

The Indian government plans to sell its stake in Air India, whose UK expansion coincides with a modest acceleration of its overall growth in recent years.

Virgin's Mumbai return covers the gap left by Jet on this route, but also marks the start of a more expansive phase beyond Virgin's core North Atlantic market. The airline is considering Indian cities such as Bangalore, Hyderabad and Amritsar, all of which have direct flights to the UK, and is also interested in securing a new Indian partner.

Virgin may also consider Kolkata, a destination also considered a possibility for British Airways. The city is India's seventh largest by population and the largest with no direct UK air service.

It looks as if the capacity gap left by Jet Airways in UK-India aviation will be filled relatively quickly, and with a wider choice of routes.