Even while Air France management was announcing a new management profile for the airline to implement the company’s “Transform 2015” restructuring programme, France’s most militant union, the General Confederation of Labour (CGT) called for a strike on 26-Oct-2012 to protest the programme itself.

Transform 2015 is designed “to restore the Company’s competitiveness and place the customer at the heart of its strategy”, but it clearly has a long way to go to win the hearts of the country’s powerful unions. The CGT described the programme as an “unprecedented attack on our jobs, our wages and our working conditions.”

Air France is a large target as the CGT gears up

The CGT’s headline attack on Air France’s restructuring plan brings with it two dangerous elements for the airline’s management. First of all there is a continuing inter-union battle which typically can lead to wholly irrational outcomes, as managements become the meat in the sandwich.

Secondly, the CGT is adding Air France’s proposals to the litany of shortcomings of the recently elected Socialist government. The union has denounced a “stunning silence” from the government, while similar measures were introduced by the French rail operator, SNCF, and the Parisian public transport service, the RATP. Now the silence continues as Air France, another national icon, seeks to rationalise.

The increasingly unpopular government of President François Hollande is under attack for failing to live up to pre-election pledges to increase taxes on the wealthy and to expand civil service job numbers. An embarrassing backdown on threats to sanction Peugeot for closing a Parisian assembly line is now being compounded as Vivendi, a major games and media company struggling under a debt mountain, is talking of large cutbacks among its 26,000 staff.

And things only look like getting worse for President Hollande as winter closes in and the eurocrisis continues. At a certain stage he is going to have to take a symbolic stance. Air France management will be hoping they are not the symbol.

To become effective on 01-Jan-2013, each of the eight Air France business units will be expected to "optimise the economic performance of its scope of activity", and will "notably be responsible for controlling costs in its area of management as well as following up the implementation of Transform 2015".

Of the eight business units, three are to be constituted from passenger operations:

To a large extent, under their respective vice presidents, each unit will operate much like an airline in itself. "Each Vice President will have responsibility for the different stages of the customer’s trip: from marketing to the implementation of the ground and in-flight products by the ground and in-flight product teams. A pilot and cabin crew manager will also report functionally to their Vice President, to ensure optimum links with crews." They will in turn "cooperate with the cross-functional businesses... and administrative services."

The other units are to be:

Air France is following the example of a number of other airlines in seeking to isolate responsibility for different functional areas in what are often remarkably complex organisations. This step also opens up the opportunity for activities like the non-core catering operation to be hived off – although at this stage management will probably feel they have enough controversial issues to be getting on with.

Air France, now part of the Air France-KLM SA Group, is the most overweight of the major airlines in Europe and most in need of a severe regime of cost reduction. Its short-haul routes are being decimated by low-cost airline operations, notably easyJet and Ryanair, even despite the difficulty for foreign airlines of establishing in the French domestic market. With costs at least 30% higher than these competitors, Air France has increasingly been forced to rely on its long-haul routes and an anti-trust immunity regime on the North Atlantic that gives it market dominance with its partner Delta, to keep its head above water.

But even those refuges are increasingly under threat as the alliance structure shifts and Gulf carrier power attacks the European airport hubs – a determining motive for Air France to make the big step of aligning with Etihad in Oct-2012.

The carrier’s dire state is well described in its past three years’ financial results below. And there has been little comfort since; the Group's 2Q2012 net loss widened year-over-year as it made provision for restructuring and suffered a drop in the value of fuel hedging contracts. The Group made a net loss of EUR895 million for the 30-Jun-2012 quarter, more than four times the EUR197 million net loss of 2Q2011. 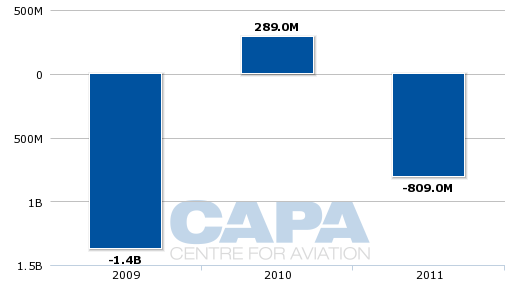 Understandably, Air France-KLM Group CFO Philippe Calavia noted at the time of the quarterly announcement: "What is clear is that we don't have a choice: the measures we proposed (in Transform 2015) are meant to ensure the survival of the company and its recovery in coming years”. Mr de Juniac recently stated that there is “no Plan B” for the company’s turnaround plan, and that the objectives of Transform 2015 "will be" achieved. To date, company management has failed to address overstaffing and low productivity, as it has had little option but to maintain peace on the industrial front. Now it looks as if, one way or another, changes will occur. But equally clearly it is not going to be a smooth road.

KLM is the smaller but more productive unit of the group – a matter that can easily lead to divisions between two fiercely proud national companies. Air France’s medium-haul operations accrue most of the losses.

The 2015 programme calls for reducing head count by 5,260 full-time equivalents (FTEs) by the end of 2013, comprised of 3,029 ground staff, 550 cockpit crew and 1,681 cabin crew. The airline has committed to rule out compulsory job cuts in exchange for a 20% improvement in productivity in all three labour categories. Unions representing ground staff have accepted the voluntary departure of 2,767 employees as well as a new collective labour agreement as of 01-Jan-2013. Also the SNPL, the union representing about 70% of Air France pilots, accepted the terms of a new collective labour agreement, subsequently approved by a two-thirds majority in Aug-2012. (Although it can be expected that pilots, above all employees, will be restive as a result of Air France's new partnership with Etihad and airberlin. This story has a lot of pieces still to be filled in.)

Two of Air France's main cabin crew unions are standouts in opposing the proposals and Mr de Juniac has responded with a threat that the current collective labour agreement, which ends 31-Mar-2013, will be replaced by a new agreement with less favourable terms and conditions. Proposals for the new collective labour agreement that was rejected by the majority of cabin crew include an increase of hours flown to 620 hours p/a on medium-haul (up from 535 hours) and to 720 hours on long-haul (up from 680 hours), a reduction of number of pursers on certain long-haul flights and a reduction in travel costs. The legal maximum limit for flight attendants is generally around 840 flight hours a year, or 70 hours a month.

Any industry observer will be well aware that Air France has little option but to push forward with its restructuring programme. Even then, it is probably substantially less than will eventually be needed if the carrier is to be a viable operation for the long term. Quite simply, Air France is an endangered species.

While it is reducing costs, every other one of its competitors is moving along the same route, so that Transform 2015 may be little more than running to keep still. The important features of the overall planning are to improve the airline's chronically low levels of efficiency. This is something that stems from the very basis of the legacy operation and tends to be buried deep in the culture of a company.

And the sheer visibility of France's "flag carrier" – for so long a valuable sobriquet as it provided protection from competition – is now the company's burden when it comes to facing up to unions keen to do little more than assert their place in the system. Leveraging the various areas of uncertainty and unhappiness among the airline's many unionised activities, more than one union is sure to be keen to capitalise on the opportunities for expanding its patch. The CGT, for one, talks tough and usually delivers.

For management, the task of first formulating an effective way through the new competitive maze, then showing the mettle to stick by their task is one thing. It will be another when a nervous and increasingly unpopular socialist President comes knocking, alarmed at the political backlash.