Air France-KLM shares fell a further 2.8% yesterday, as “brutal” and “very large” reductions in demand for cargo and premium travel, respectively, according to CEO, Pierre-Henri Gourgeon, raise investor concerns about a recovery for the carrier. The carrier announced it may introduce measures, including reduced working hours, in reaction to the weak economic and demand conditions.

Mr Gourgeon told Reuters, “we don't see the slightest bright spot. The reduction in demand in cargo is brutal. The drop is also very large for high-spending customers.”

British Airways’ (BA) shares declined 3.4% yesterday, as investors fear industrial unrest is increasingly inevitable. The carrier entered into mediation talks with its Unite and GMB unions to address BA’s GBP130 million package of cost saving measures. Talks broke down at the end of June, with the parties failing to reach an agreement.

GMB National Officer, Mick Rix, told Sky News, these talks are a “last throw of the dice” and warned BA must “seriously shift its stance.”

Aer Lingus’ shares closed 4.9% as the carrier disclosed it has approached Irish, UK and German authorities to assist its attempt to force Ryanair to sell its stake in the carrier. The carrier is currently appealing the European Commission’s 20007 decisions not to force the sale. 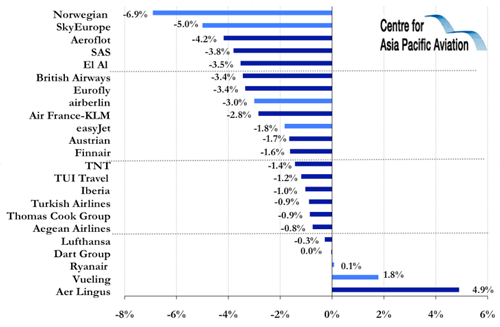