Does Air Canada need a low cost subsidiary? Or will a blood transfusion do? Yesterday, the flag carrier’s pilots’ union effectively dumped its leader, declaring war on management’s recent proposal to establish a low cost subsidiary. That Air Canada needs something dramatic to make it sustainable is as obvious as the maple leaf on the national flag. So this could be a seminal few weeks for the carrier.

One of the key features of Air Canada in 2009 that incoming CEO Calin Rovinescu said he needed to change was the airline’s culture. The ailing flag carrier had just been bailed out by the government, escaping having to seek bankruptcy protection for the second time in five years. That political intervention was hardly the best message to send to a workforce in need of an extensive overhaul. In the event it didn’t get the makeover. The compromise package still left the airline overweight and not conditioned to deal with the long term future.

Air Canada suffered from a high cost base – much higher than its expansive domestic competitor WestJet - and a heavily unionised workforce reluctant to make concessions. It was only after the intercession of a skilled government mediator that the powerful pilot, cabin attendant and engineering unions would agree to sufficient pre-bailout concessions demanded by the government and owners as the price of survival. Since then, the airline has performed better, helped by its national monopoly on international services and a government willing unquestioningly to protect it from too much foreign competition. The loss to Canada’s economy as a result has been massive, but that is another story.)

There are some things however that simply cannot be ignored. Competing in the point-to-point domestic market against high quality low cost competition, handicapped by a wide cost disadvantage, is exactly the problem that the European full service airlines suffer. They have compensated by cutting back on short haul point-to-point operations and cross-subsidising their losses by their international profits. Air Canada cannot afford to cut back domestically; that chops off its foundations for lucrative corporate contracts. Yet it remains doggedly uncompetitive.

Back in early 2009, when Air Canada was sinking fast, the cost differential with WestJet was nothing short of gruesome, at almost CAD0.07cents a mile more costly. The reality was even worse than that, because about half of Air Canada’s miles were flown on long haul international routes, where unit operating costs are much lower. Taking those out, to compare like with like, WestJet’s costs would have been about half of Air Canada’s on domestic services. Air Canada was a soft target. 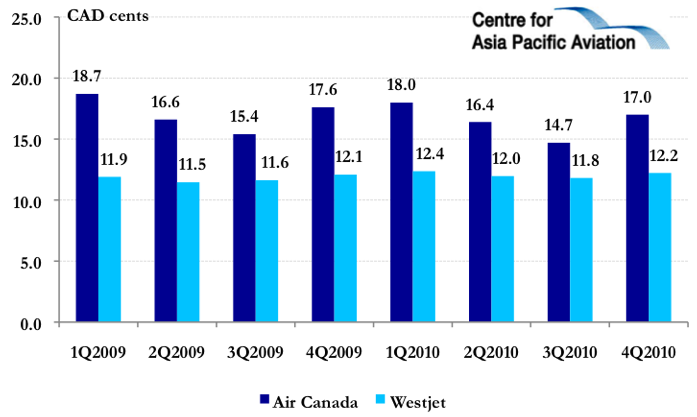 By the last quarter of 2010, Air Canada had clawed back a bit of the gap. But only a bit. Allowing again for its advantage of operating a high proportion of lower cost longhaul services, the flag carrier’s domestic disadvantage against WestJet remains cavernous. Certainly WestJet has increased its longhaul operations and Air Canada has a small yield margin over the LCC, but there is no escaping the fact that one producer is putting the same goods into the market under a massive handicap.

The cost disadvantage helps explain that, despite Air Canada’s protected (and profitable) international operations, it managed a meagre net profit USD107 million of for the 12 months to 31-Dec-2010, on revenues of nearly CAD11 billion.  WestJet meanwhile, made a CAD137 million profit – but on revenues less than a quarter of its older relative. One airline is creating profits, the other is spinning its wheels.

Moreover, Air Canada is living on borrowed time internationally. It has enjoyed a dream run, with no home-grown competitor on its longhaul routes, supported by Star Alliance codeshares and protected from new competition. Last year was as good as it will ever get for Air Canada in its current form.  That’s not a healthy outlook, as fuel prices rise and WestJet closes in.

The LCC has meanwhile been struggling hard to upgrade its IT systems, to make it a more effective partner for foreign alliances and will progressively enhance its codeshares and domestic feed capabilities. Another two years and Air Canada’s international advantage will be sorely eroded. Its domestic operation will be in dire straits.

To saw off the arm or to die slowly?

When Qantas established its domestic low cost subsidiary in 2004, it was against all the conventional wisdom. Like Air Canada, it was being undermined by a much lower cost and more attractive LCC, Virgin Blue. Qantas had tried half-baked compromises, one of them using seconded mainline pilots and staff into a hybrid lower cost operation. But they were doomed from their beginnings.

Faced with a slow and painful death, the airline went about setting up non-unionised Jetstar, which today represents the future for the group, as Qantas itself contracts internationally. It also embarked on a cost reduction programme that has helped make it vastly more competitive. Domestically the mainline carrier has prospered (narrowly avoiding a privatisation in 2007 which would have split out its valuable Frequent Flyer Programme, among others). With Jetstar it has managed to maintain a (profitable) domestic market share of 65% and, in doing so, effectively forced Virgin Blue to compromise the low cost model, moving up market into a higher cost operation. Even with a third competitor, the aggressively low cost Tiger Airways, in the market, Qantas is keeping its nose ahead.

That was clearly an experiment that worked – almost certainly saving Qantas from extinction, or at least from needing to be bailed out. As a result too, it is poised to share in the enormous growth curve that intra-Asian aviation is embarking on.

Today, however, like Air Canada, Qantas’ pilots are in revolt. For Qantas, a broad based strike threatens, across several employee groups, seeking total job security and pay increases. This may be a coincidence.

For Qantas this could spell some very troublesome months, but, having made a lot of the hard yards already, it should survive – or at least Jetstar will. For Air Canada, failure to take bold steps now will surely confine the carrier to a lingering and painful decline.

Each is fragile in its own way. A continued surge in oil prices or a slump in demand has a much greater impact in those circumstances. In the constant shock environment of aviation, it is not a good place to be.