Air Canada downhill fast, while Republic’s claws back a little. US Air down again, GOL and TAM lose

US Air lost another sizeable amount, following an uncomfortable 6.6% fall in value the previous day. Republic Airlines regained ground a little after recent heavy falls, as investors continue to try to assess the details of the airline’s realignment of its operating model.

And, though Air Canada would like to be there in Whistler for the Winter Olympics to be held in a few months, right now it is already peering out of the gate at the Downhill course. Despite vigorous attempts to avoid it, and government-backed loans, the flag carrier looks every day to be a little closer to inevitable bankruptcy protection. Its market share is crumbling and its yields are troubled, with no bright lights on the horizon, despite broad union support over the key pension issues.

Although it is small comfort, domestic competitor WestJet (-2.6%) is also suffering from the weak conditions at home, again losing ground.

And, after gaining on the back of an announced codeshare/FFP agreement with American Airlines on Tuesday, GOL shed all of its gain yesterday. The market is apparently re-evaluating just how valuable the arrangement will be for the carrier. 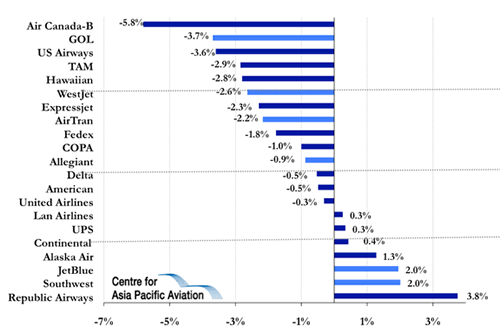